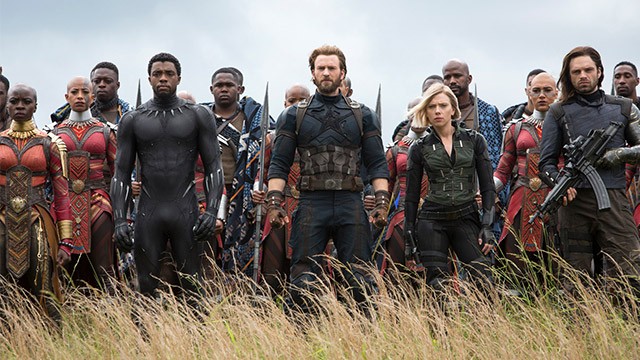 (SPOT.ph) Rising temperatures and a traffic-free Metro could only mean one thing: summer is finally here! If you’re chained to your desk this season, don’t worry; there are plenty of awesome movies that are worth a watch this April. From the highly anticipated Avengers mashup to a truly terrifying horror movie, you’ll be entertained all month long.

It’s Dave Franco and Broad City’s Abbi Jacobson as you’ve never seen them before in this new Netflix original film. Over the course of one night, a woman (Jacobson) drives her heroin addict brother (Franco) across Los Angeles in search of a detox center, with his two-year-old daughter in tow.

John Krasinski of The Office fame surprised critics with his third directorial effort, which many are already hailing as one of the best and most terrifying horror movies ever. He and his real-life wife Emily Blunt play a married couple who must survive against bloodthirsty monsters that devour anything that makes a sound.

When a rogue experiment goes horribly wrong, a gentle gorilla turns into a massive and monstrous beast that threatens the world. A primatologist (Dwayne Johnson) leads a team that must secure an antidote and prevent global destruction.

I Am Not An Easy Man

In this French dark comedy, a shameless chauvinist gets a taste of his own medicine when he wakes up in a strange new world that’s dominated by women. The movie streams on Netflix starting April 13.

Inspired by events that took place in 1976, this film tells the story of an Air France flight that is hijacked by terrorists. Its passengers are held hostage in Entebbe, Uganda and it’s up to the Israeli government to execute a daring rescue. The film stars Daniel Bruhl and Oscar nominee Rosamund Pike, and is directed by Narcos creator Jose Padilha.

Rosamund Pike makes a second appearance in this list with Beirut, where she plays an undercover CIA agent tasked to protect a former U.S. diplomat (Jon Hamm) who is called back into service in war-torn Beirut.

This critically acclaimed movie centers on a precocious six-year-old named Moonee (breakout star Brooklynn Price), who lives in poverty alongside her rebellious mother (Bria Vinai). They cross paths with Bobby (Willem Dafoe), who manages a run-down motel along a highway.

The highly awaited clash of all your favorite Marvel superheroes is finally here! Captain America (Chris Evans), Iron Man (Robert Downey Jr.), Thor (Chris Hemsworth), the Hulk (Mark Ruffalo), and the rest of the Avengers must unite to battle their most powerful foe yet: Thanos (Josh Brolin). The heroic showdown features the casts of Doctor Strange, Black Panther, Spider-Man: Homecoming, and Guardians of the Galaxy.

In this Netflix original film, a father is suddenly possessed with supernatural powers and sets out to help his estranged daughter. Part-action, part-adventure, and part-comedy, this Korean movie is directed by Yeon Sang Ho, who previously helmed the 2016 zombie hit, Train to Busan.

An introverted high-school girl from a working-class background falls in love with her wealthy debate team rival. She soon realizes that they share more in common than they initially thought. Not much is known about the cast just yet, but we do know that the film starts streaming on April this April 27.