New Music from Lady Gaga, The Weeknd, Taylor Swift, and More
Loading
Already a member? Log in
No account yet? Create Account
Spot.ph is your one-stop urban lifestyle guide to the best of Manila. 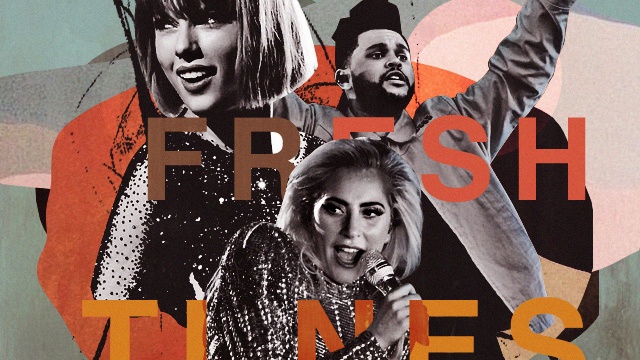 10 New Songs to Add to Your Playlist This April

Listen to our picks featuring Lady Gaga, The Weeknd, Kygo with Miguel, Itchyworms, Hulyo, and more!

Lady Gaga just released this lovely cover of an Elton John classic. The pop songstress' version of "Your Song" features her unique pop-ballad flavor and her powerful vocals against an exquisite piano-led arrangement, complete with choral backing vocals.

Fun fact: The song is part of the album Revamp: Reimagining the Songs of Elton John & Bernie Taupin, which is due for release on April 6. It will feature new versions of Elton John songs from other popular acts like Mary J. Blige, Coldplay, Ed Sheeran, and Sam Smith, among others.

Count on Itchyworms to spread sunshine on a gloomy day. The band just released the music video for their latest single, which features their signature rock sound. While the song's message is on the serious side, the band does not fail showing the humor in the accompanying music video.

Song: "Call Out My Name"

Fun fact: The single is off The Weeknd's new record, My Dear Melancholy, which has has so far received good reviews. It has also been dubbed a breakup album according to some reports.

You need to keep Hulyo in your radar for their distinct alternative sound and poignant songwriting. "Kahit Isang Saglit" features sincere lyrics paired with a memorable instrumentation.

Song: "Remind Me to Forget"

Norwegian DJ and record producer Kygo and American singer-songwriter Miguel team up for a new club banger. "Remind Me to Forget" combines the two artists' electronic and R&B sensibilities. Kygo peppers the song with catchy beats, while Miguel lends his smooth vocals.

Indie-folk band Munimuni deserves a spot in your music library, in case they're not there yet. Their latest poetic masterpiece is a touching love song entitled "Tahanan." The song has a hopeful message matches its intricate folk arrangement and relaxing vocals.

Fun fact: The band also calls their genre "makata pop," which is a fitting way to describe their sound.

Taylor Swift recently shared the music video for her single "Delicate." The mid-tempo pop ballad has a dreamier vibe than her earlier releases. The lyrics hint at either of these two things: The beginning of a relationship or possible troubles caused by fame.

Fun fact: Swift shows her goofy side as she makes funny faces and dances like no one's watching in the music video.

Better Days combines rock and R&B in their single "Nararamdaman." The tune marries edgy and chill energies and features a hypnotic guitar-heavy instrumental during its second half.

Grace VanderWaal shares her empowering take on Johnny Nash‘s 1972 classic. In "Clearly" the 14-year-old singer showcases her vocal prowess as she belts through the chorus while accompanied by a gospel choir.

Fun fact: VanderWaal is the winner of America's Got Talent season 11.

Callalily tackles loss in their latest single, "Litrato." Amidst the rich rock instrumentation are heartbreaking lyrics. According to reports, frontman Kean Cipriano wrote the song for his father who passed away due to cardiac arrest March last year.

Fun fact: Callalily is set to perform in Singapore this month.