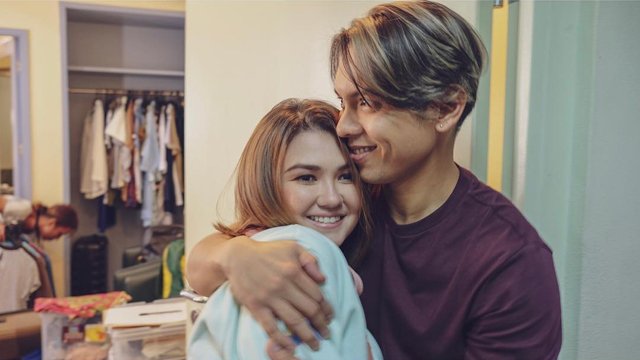 LOOK: Exes Angelica Panganiban and Carlo Aquino Are Finally Working on Their New Movie Together

Along with director Dan Villegas!

(SPOT.ph) In today's exes-that-may-or-may-not-get-back-together news, it seems that Angelica Panganiban and Carlo Aquino are finally working on their new project together.

The two made headlines back in February because Carlo surprised Angelica not just once—with a bouquet of flowers for Valentine's Day—but twice, when he also showed up at one of her book signings. Fans immediately got into a frenzy, hoping that it meant that the two were rekindling their relationship. But they got the next best thing when Angelica herself confirmed that she and Carlo were being offered to do a romantic comedy.

Then, on April 20, Angelica poked fun at her love-team pairing with Carlo when she posted a photo of her leaning in for a kiss with actor JC Santos (Mr. and Mrs. Cruz). In her caption, she says, "Next love team ko. Looking forward to work with you!!!" She then addresses her past love-team partners, Carlo and JM De Guzman (whom she worked with on That Thing Called Tadhana). "'Wag kayong feeling. 'Wag na tayo mag-work. Ang gugulo ng mga fans niyo. Minura nga nila ko e," she says with a laugh. "Cute naman. Mahal na mahal nila ang mga idol nila."

But fans can breathe a sigh of relief because 1) it was just a joke and 2) it looks like she really is heading back to the big screen with Carlo. On April 24, he posted a sweet photo of the two hugging presumably on set—or at least, in a dressing room. The photo is coyly captioned with, "Pagkakakitaan," along with the hashtags #Looktest, #Happening, and #Walangbayad.

And it looks like the movie will be helmed by director Dan Villegas (Walang Forever, English Only, Please), who also posted a photo of the two during the look test. He may not have revealed a lot about the movie, but he did include the hashtag #AnggeCaloy in his caption. It could be a reference to Angelica and Carlo's real names or the names of their characters. Either way, fans definitely have something to look forward to!

Angelica and Carlo last worked together on an episode of Maaalala Mo Kaya in 2014. They revealed that they were in a six-year relationship before breaking up because they weren't mature enough yet.