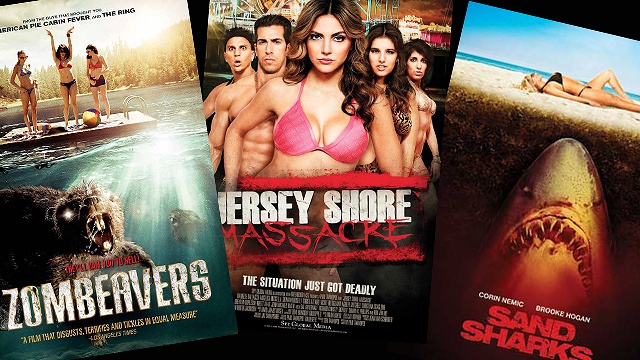 10 Summer-Themed B-Movies That Are Actually Fun to Watch

For when you just want some mindless entertainment.

(SPOT.ph) Summer almost always means big blockbuster hits that everyone’s been anticipating. And while there’s no doubt you’re waiting for the next big release, you’ll have to keep busy with other movies that are just as fun. B-movies might not be the first thing that come to mind, but there’s something about them that just makes them that fun to watch. Maybe it's the super-bad CGI or the impossible premise—either way, it’s mindless entertainment that's cringe-worthy, and cheesy fun. We round up 10 of them that’ll have you watching through your fingers because of how bad they are—so outrageously bad that they might actually be...good.

We’ll beat you to it. No, it isn’t named after that bar your cool tito always talks about. Club Dread is a comedy-slasher film revolving around Pleasure Island, a sketchily named resort off the coast of Costa Rica. The staff members of the resort have more than their fair share of fun (if you know what we mean), but things take a turn for the worse when a masked killer starts murdering them one by one. The staff try to figure out who the killer is and find out why he’s only targeting them, not the guests. But as soon as they get close to figuring out who it is, they suddenly get killed. It’s actually fun trying to piece the puzzle together for yourself, as if it were an old-school Scooby Doo mystery.

To escape the summer heat, you might think it best to head over to a place with some snow and maybe even learn how to ski. But that won’t go according to plan when you’re suddenly attacked by genetically mutated spiders. (As if the normal ones weren’t bad enough.) In the movie, a bunch of teens race each other down the mountain (y’know, normal things people do on vacation). Little do they know that on the other side of the mountain, scientists have been experimenting on how to make armor from the spiders’ webs. You already know what happens after.

While it arguably has a bigger budget than the other movies on this list, you still can’t excuse Piranha 3D from being a B-movie that serves as a spoof of an older B-movie. (Yes, even if it has an ensemble cast including Elizabeth Shue, Adam Scott, Jerry O’Connell, Jessica Szohr, Eli Roth, and Christopher Lloyd.) As teenagers head to Lake Victoria to celebrate spring break, an earthquake causes the lake floor to rupture. A school of prehistoric and cannibalistic piranhas emerge from the crack and start terrorizing the city. You might lose track of the characters given how many they are in just one movie, but don't worry, the flesh-eating piranhas will take care of that soon enough.

Tucker (Alan Tudyk) and Dale (Tyler Labine) are two hillbillies who just wanted to have fun in their newly bought vacation house in—you guessed it—the woods. They soon come across a group of friends who are also going camping nearby. One of the girls, Allison (Katrina Bowden) gets detached from her group as Tucker and Dale save her from drowning. It all just goes downhill from there. Allison’s friends all think that she’s been kidnapped by Tucker and Dale. Her friends pursue the “criminals,” but they accidentally kill themselves one by one, making it seem like Tucker and Dale really are murderers. Long story short: Everything that could possibly go wrong eventually goes wrong—making it all the more fun to watch.

There’s only so much you can expect from a movie that’s called Megapiranha. The genetically modified piranhas swim—more like destroy, really—their way from Venezuela all the way to Florida, where tourists have flocked for the summer. Warfare ensues as government forces try to contain the situation, with needlessly expensive cars and machine-gun helicopters to boot. And if you think they’re overreacting, the megapiranha don’t just swallow two huge battleships, but also a nuclear submarine, too. So, really, the whole movie itself is one big overreaction.

The tagline of this movie is “100 years later, lightning strikes twice.” It doesn’t really make sense given that there wasn’t even a lightning strike in the original Titanic movie, but we digress. (Though the plot of this knockoff is still similar.) Somehow thinking that it’s actually a good idea, people go on board a luxury cruise liner called the SS Titanic II, 100 years after the original Titanic set sail. This new cruise still follows the same route as the Titanic, just in reverse direction. But then because of global warming, a large glacier breaks and an iceberg (surprise!) crashes into the ship, causing it to (surprise again!) sink. It’s not really a spoiler alert given that that’s exactly what happens in James Cameron’s Titanic, but maybe it’s also a warning to try and stop global warming?

Heading to a summer festival soon? This movie’s unbelievably crazy premise might just make you think twice about your much-awaited trip to the beach. As cops try to investigate mysterious murders, they decide it would be for the best to close down the beach first. But because the town is already in debt, the local residents keep trying to find their way around it to their demise—literally. As a shark expert (played by Brooke Hogan) on the movie explains, they're being attacked by a prehistoric sand tiger shark that travels through sand like it’s water. Minor spoiler alert: The sharks turn into glass when they’re killed with fire because...science.

The joke’s on you if you thought Sand Sharks would be the most unlikely plot you’ll hear on this list, because they (unfortunately?) decided to make a sequel. This time, they’re taking it up a crazy notch because the sharks are appearing on ice-capped mountains. As a bunch of teenagers enjoy spring break shredding down the mountains—in their bikinis and boardshorts, no less—they get attacked by sharks who move through snow like it’s water (which, again, is the same premise of Sand Sharks). Apparently, an ancient native chief used totems to protect the mountain from miners. But the totems must have been disturbed, causing the sharks to appear and attack the tourists and residents. Seems plausible, right?

When your friends invite you to spend the weekend in an isolated cabin in the woods with no phone signal, it might be best to just say no—yes, even (and probably especially) if there’s a lake. This horror-comedy will show you why. A canister of toxic chemicals accidentally falls from a transport truck and makes its way to a river, exposing beavers to the substance. After a while, three teenage girls arrive at a cabin near the lake and their boyfriends soon follow. They’re all off to have a good time until the now-undead-and-mutated beavers start attacking them. It would’ve been fairly easy had the beavers just killed them right there and then, but it turns out that their saliva also infects people and causes them to change into zombie-beavers too. Nope, not just just zombies. Zombie-beavers.

You’ve probably already heard of Jersey Shore, the campy reality show starring eight Italian-Americans who call themselves “Guidos” and “Guidettes” and whose daily activities are “Gym, tan, laundry.” (If only real life were that easy.) The show soon became a trend in pop culture and it only makes sense that a B-movie would be made in its cringey-but-somehow-hilarious honor. Jersey Shore Massacre follows the story of a group of friends head to Seaside Heights (the actual place where Jersey Shore is shot) for a weekend trip. But instead of fist pumps and bikinis, their weekend is filled with terror and blood as they find themselves in the middle of a serial killer’s deranged plans. What makes the whole thing even more ridiculous is that Jenni “JWoww” Farley, who’s from the original cast of Jersey Shore, serves as executive producer of the movie.