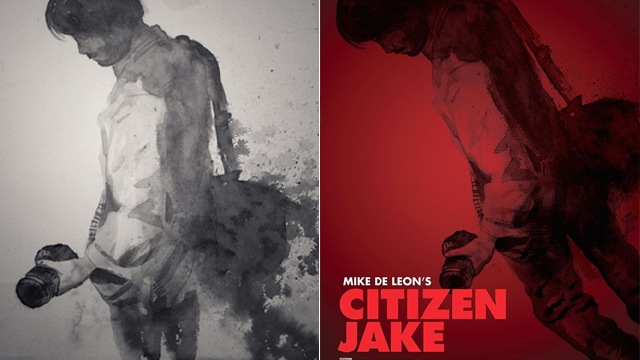 LOOK: The Official Poster of Citizen Jake Didn't Go According to Plan

But it still turned out perfectly.

(SPOT.ph) With a highly anticipated nationwide screening on the way—starting May 23—it was only a matter of time until Citizen Jake finally released its official poster. It was shared on Citizen Jake's Facebook page on May 6, but other poster studies have also been shared on the page in March.

The first study was a black and white poster study by Francis Sacil Espiña that depicted a palm in the middle of an eye.

The second poster study was shared from artist Chester Buencamino's Facebook page. It's also a black and white poster with a hint of blood dripping from Jake's hand. "Not a noir [film] but that was the feel I was kinda going after for the poster (could also pertain the 'dark' nature of the film). The hint of blood could symbolize a lot of things," he explains.

But it was the work of Tom Estrera III that director Mike de Leon chose to be the official poster of his film. "It's a feel of something rough, unpredictable, unfinished, perhaps even damaged—that is the story of Citizen Jake. Tom got it right for me," he says.

Getting it right doesn't always mean everything turns out according to plan. Estrera shares the story behind his work, saying, "Some of the splatter effects are actually accidental. I placed the artwork out under the sun to let it dry quickly." The splatters came from a sudden downpour while his work was left to dry outdoors. Estrera is also the same artist behind the banners used for the first public screenings back in March. It seems only fitting that his work will also be used to get the film to a wider audience.

Citizen Jake stars Atom Araullo as a journalist investigating the rape and murder of a teenage girl, leading him to a deeper problem related to dirty politics and his family. Produced by Cinema Artists Philippines, the film will be distributed by Solar Pictures on May 23.

Citizen Jake Atom Araullo Mike De Leon
Your Guide to Thriving in This Strange New World
Staying
In? What to watch, what to eat, and where to shop from home
OR
Heading
Out? What you need to know to stay safe when heading out