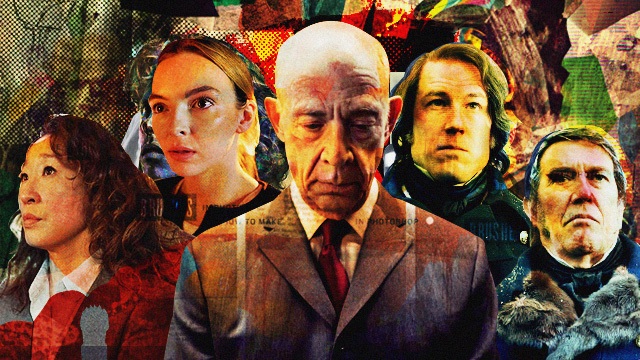 Streaming Shortlist: The Shows You Must Binge-Watch This Long Weekend

In case these shows have slipped past your radar.

(SPOT.ph) Whether you decided to cash in your leaves and take this whole week off, or you went to work on Wednesday and Thursday with a long weekend ahead, here are some shows that you might have missed recently but are ready for binge-watching. These are shows with current seasons that have just wrapped up, or are about to, meaning they have enough episodes for you to watch in one go.

This is such a clever show. Just when you thought there couldn’t possibly be another show about spies and Berlin, this one comes along and it’s sci-fi, to boot. You may know J.K. Simmons from many TV shows and the film, Whiplash, in which he memorably played a sadistic drum teacher. In this series, he plays two characters: both of them named Howard Silk, because, as it turns out, for every person in Berlin (Berlin “Alpha”), where the story is set, there is a doppelgänger for that person, because there is another, parallel Berlin (Berlin “Prime”), which was discovered in 1987. Since that discovery, however, the two Berlins have evolved differently; and Simmons thus plays a Howard Alpha and a Howard Prime, radically different from each other, yet forced to work together because Alpha’s wife is in a coma and Prime has to make contact to prevent a collision between the two worlds. One part classic Berlin Cold War spy story, another part hard-core science fiction adventure tale, it’s one engrossing tour-de-force of storytelling.

In 2016, after having been missing for 168 years, the H.M.S. Terror was finally found. Two years earlier, another ship, H.M.S. Erebus, had been found. Together, the two ships comprised the vessels of the ill-fated Franklin expedition, which had been tasked with charting the Northwest Passage in Canada, but which disappeared, along with 130 crew and officers. The irony is that for close to two centuries, people had searched for traces of the Franklin expedition, but ignored the stories and lore of the Inuit because they were “savages.” As it turned out, the Inuit had known where the ships were all along. And, as evidence has been unearthed (including the sensational exhumation of three crew members), other Inuit tales seem to be increasingly confirmed, such as early survivors having engaged in cannibalism to survive.

But before the ships were discovered, Dan Simmons published a novel in 2007 entitled The Terror, merging meticulous historical research with a horror story based on a mythical beast stalking the crews of the ships. Turned into a series, over 10 episodes allow you to follow the doomed path of the Terror and the Erebus, complete with arrogant officers, scheming crews, a terrifying monster, and special effects that will chill you to the bone. It has a cast of familiar British faces: Ciarán Hinds (you know him from Game of Thrones), Tobias Menzies (from Rome), and Jared Harris (from The Crown).

The French have a saying that behind every great fortune is a great crime. At the very least, time and again, audiences have been entertained with lurid tales of the excesses of the rich. In his time, no one was richer than J. Paul Getty, perhaps the last of the truly colossally-wealthy of the oil barons. Donald Sutherland gleefully plays the billionaire oil mogul, living in a gigantic British castle but with a pay phone in the lobby so he wouldn’t have to pay for the calls of house guests; and who famously refused to pay ransom when his grandson, J. Paul Getty III, was kidnapped in Italy in 1973. The cast includes Brendan Fraser in one of the roles of his current renaissance as an actor. It’s a trippy, icky, gorgeously filmed examination of paranoia, selfishness, terror and lavish living, as this controversial re-telling (the Getty heirs have publicly criticized the series) of the kidnapping unfolds.

If you’re a fan of all things Marvel Universe-related, you probably know the comic book featuring Legion, the son of Professor Xavier. It was only a matter of time before an X-Men connected TV series came out, and here it is. The story involves David Haller, who starts figuring out he may not be mentality ill, but instead, a mutant with psychic abilities. Along the way, he meets and falls in love with a girl, is chased by a secret government agency, confronts another powerful mutant who’d done battle with his father–all of this in a highly-engrossing, and at times, thoroughly confusing, chase through time, space, and minds. Each season (there have been two, so far) is told in a different way, extremely creatively, and delightfully filmed. This is a series that requires a bit of concentration that pays off by the end of each episode, as the viewer starts piecing things together. You’ll like this if you’re a fan of Black Mirror and similar efforts that like to probe and prod your mind.

Based on the Villanelle novels by Luke Jennings, this is an unusual and extremely witty BBC America series. If Hannibal Lecter were just a psychopath, Russian, and a beautiful woman, he would be the ruthless assassin Oksanka Astanova, a.k.a. Villanelle, a truly memorable baddie played with blood-spurting, obsessive, yet self-aware panache by Jodie Comer. It just so happens that Eve Polastri, the title character in the series, a Korean-American who somehow is in London, is working for MI5 as part of a team that does the boring back-end work for the agency. When Villanelle assassinates a witness in London, Eve displays a knack for figuring out that the killing is part of a spree of murders taking place in Europe. This is one show where the people who are clever are women and the men, on the whole, playing catch-up the whole time. It’s not a show for the squeamish but its dark humor will delight. Sandra Oh is a comic delight, supported by a British cast of misfits and schemers without which any spy-and-psychopath story wouldn’t be complete.