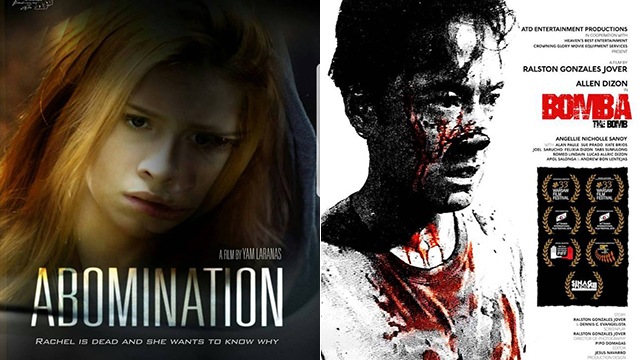 It's not too late to catch some quality Pinoy films!

(SPOT.ph) The Sinag Maynila International Film Festival was founded in 2016 by director Brillante Mendoza and film producer Wilson Tieng with the aim to promote local independent cinema and its capacity to educate and inspire. If you feel bad about missing this year’s Sinag Maynila selection, don’t sweat it—you still have a chance to watch all the entries at the University of the Philippines’ Cine Adarna from June 26 to 30!

You can catch Bomba and other great Filipino films for only P150 per screening at the UP Cine Adarna. Just in case you’re still undecided about which movie to watch, here's a little more info about the festival’s six feature films:

A woman (Tippy dos Santos) is knocked unconscious on the street. When she wakes up, she claims the identity of a person who was brutally murdered two months ago. After she is brought to a psychiatric hospital, she struggles against odds to find the truth about her identity and the mystery surrounding her mysterious “death.”

Pipo (Allen Dizon) may be deaf and mute, but he has always worked hard by taking on odd jobs so that he could support himself and his teenage lover. But things take a violent turn when people start to take advantage of him and his problems start to pile up.

Abner (Alvin Anson) and Viola (Jean Judith Javier) lead sad, solitary lives: Abner’s life revolves around his work at a pest control company, and Viola's husband Dodie only seems to care about himself. After meeting at work, Abner and Viola start an illicit affair. Will they succeed in starting a new life with each other?

This full-length documentary film is about Simone Rota, a Filipino orphan who was adopted by Italian parents. The film traces how he was raised in Italy to become a professional football player, and how he eventually comes back to the Philippines to play for the Azkals, the Philippine Men’s National Football Team, and the Davao Aguilas FC.

In Melbourne, the lives of a feminist documentarian, a pickup artist, and a virgin intersect. Aries is a Filipino-Australian documentarian who is filming a group of men taught to seduce women. Meanwhile, Melody walks on the Melbourne streets at night as a prostitute. This film is the second part of a series that portrays the lives of modern Filipinos in Australia.

Alex and Jerry may have different backgrounds, but a chance encounter and a casual conversation lead to a life-changing experience for them both. The new friends decide to go on a road trip where they discover more about their past and themselves.

Tale Of The Lost Boys Melodrama/Random/Melbourne! Journeyman Finds Home: The Simone Rota Story El Peste Romansa Abomination Sinag Maynila Film Festival Sinag Maynila Films Bomba
Your Guide to Thriving in This Strange New World
Staying
In? What to watch, what to eat, and where to shop from home
OR
Heading
Out? What you need to know to stay safe when heading out