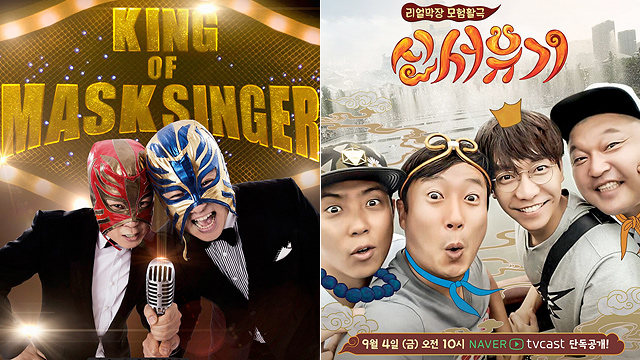 10 Funny Korean Variety Shows That Will Become Your New Obsession

They're full of surprises.

(SPOT.ph) Korean pop culture has become so ingrained in our daily lives that it’s almost hard to remember a time when we didn’t have a lineup of K-Drama shows to obsess about or when oppa wasn’t a part of our vocabulary. But if you think we’ve reached peak Korean, think again. Let us introduce you to the still-very-much-underappreciated genius that is the Korean variety show. Here are 10 hilarious ones you should start binge-watching over the weekend:

Watch it on: Viu
Those who aren’t strangers to Korean variety shows today may have very well started with SBS’s Running Man. The show has been around since 2010 and is composed of a regular cast who must fulfill a different mission every episode—some of which involve using supernatural powers against each other or busting out of prison. Over the years, a lot of famous hallyu stars have joined the show as guests, but international celebrities like Jackie Chan and, more recently, Tom Cruise, have appeared on the show as well!

Watch it on: YouTube
Also known as 1 Night 2 Days, this variety show takes its cast members to some of the most beautiful spots in South Korea. While the awe-inspiring panoramic shots and picturesque destinations are enough to hook you, there is, as always, a catch. In each episode, a mission is introduced, pushing the cast members to outwit or outlast each other. Their funny attempts to get in first place or, at least, avoid last place, are comedy gold.

Watch it on: YouTube
Infinite Challenge was so popular in South Korea that it became known as “the nation’s variety show.” While it aired its last official episode in March 2018, some of its most popular segments and specials—from the largely unscripted Infinite Company skits to the bi-annual song festivals—deserve an encore.

Watch it on: Viu
Singing competitions may be a dime a dozen these days, but King of Mask Singer is not your ordinary talent show. In a, shall we say, valiant effort to judge the performers—mostly popular singers—solely by the quality of their voice, the variety show dresses them up in the most outrageous costumes and masks to hide their identity. If the premise sounds like a joke, their voices certainly aren’t.

The Return of Superman

Watch it on: Viu
You’d think that a show about a day (or two) in the life of celebrity dads and their kids in South Korea wouldn’t be interesting, but The Return of Superman nails such a perfect balance between tranquil domesticity and pure cuteness that it's hard to turn away from the screen. The dads who have appeared on the show include actors and professional athletes, and at one point, even Robert Kelly, the political analyst and associate professor whose BBC interview was interrupted by his kids on air!

Master in the House

Watch it on: Viu
Also known as All the Butlers, this variety show has the cast spending some time with a “Master” like a professional athlete or an actor in order to learn a thing or two about life. While the hilarious games and pranks are fun to watch, the show also never fails to leave viewers with nuggets of wisdom. Another reason to watch Master in the House: The cast includes Lee Seung-gi of My Girlfriend Is a Nine-Tailed Fox and Yook Sung-jae of Goblin.

Watch it on: Netflix
If you love a good mystery, Busted! is an interesting concept. Each episode features a mind-boggling case that the cast must solve together. One episode has the group investigating the diary of a girl who died under mysterious circumstances. Another episode involves vampires! See how well you can connect the dots with each.

Watch it on: YouTube
One of the exciting things about Korean variety shows is their ability to evolve. In season one of Sister’s Slam Dunk, the all-female cast are on a mission to fulfill their dreams—from opening a restaurant to debuting in a girl group. The format is largely unscripted, resulting in plenty of naturally funny moments between the women. Season two, however, focuses more on the journey of the said girl group. While the show still has lots of amusing scenes, the episodes are now centered on the women releasing songs and preparing for performances. Sister’s Slam Dunk aired its last episode in May 2017.

New Journey to the West

Watch it on: Viu
If you like 2 Days & 1 Night, you might want to check out tvN’s travel-themed variety show based on the classic Chinese novel Journey to the West. On a mission to collect seven wish-granting dragon balls, the cast go on a backpacking adventure through different parts of China (and later on in Vietnam), all the while playing various games and pranks on each other. The episodes only get funnier with every season. In fact, the trailer for season five has just been released. Watch it here!

Variety Shows Viu Netflix Korean
Your Guide to Thriving in This Strange New World
Staying
In? What to watch, what to eat, and where to shop from home
OR
Heading
Out? What you need to know to stay safe when heading out