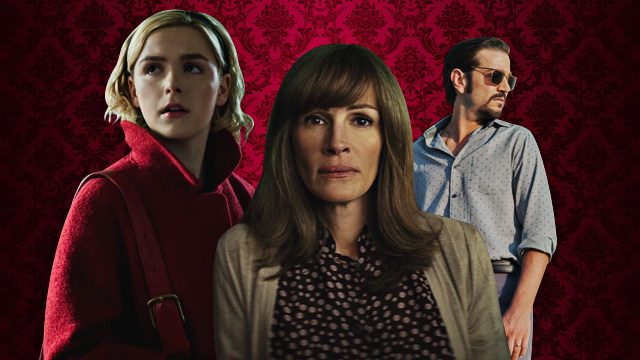 From spinoffs of old favorites to adaptations of beloved books.

(SPOT.ph) 2018 is almost over, but you know what isn’t? Our anticipation for some awesome new TV shows—because, hey, it’s good to have something to look forward to. So if you’re itching to catch some new stories, new characters, and new plot twists, have no fear. Mark your calendars and gear up for the premieres of these 10 highly-anticipated shows coming out before the year ends.

Premiere date: October 25
Watch it on: CWTV
Are you a fan of The Vampire Diaries and its spinoff series The Originals? Then you won’t want to miss yet another spinoff series set in the mythological universe of vampires, werewolves, and witches. This time, the series focuses on Hope Mikaelson (Danielle Rose Russell), a descendant of some of the most powerful bloodlines of the supernatural, as she enters the Salvatore School for the Young and Gifted.

Premiere date: October 26
Watch it on: Netflix
You might remember your childhood with Sabrina, the teenage witch—and Netflix is coming up with an original live-action series full of the magical wonders and teenage woes that everyone loved so much. But since one of the brains behind this new series are also the brains behind drama-infused Riverdale, who knows what other twists and turns we can expect?

Premiere date: October 28
Watch it on: BBC One
From one of the most popular directors from South Korea, Park Chan-wook (who also directed the highly acclaimed The Handmaiden) comes The Little Drummer Girl, a spy thriller involving a young actress who is offered a role in “the theater of the real.” The mini series is based on a novel of the same name and is a can’t-miss for spy fiction fans!

Premiere date: November 2
Watch it on: Amazon Prime
Fun fact: Julia Roberts’ new TV show Homecoming is based on the story of a widely popular psychological podcast of the same name. Both the podcast and the show center on Heidi Bergman, an employee at the Homecoming facility that helps soldiers transition to civilian life. The story takes places years after she’s left, when a Department of Defense auditor takes a sudden interest in her reason for leaving. Then, Heidi realizes she might have left for very different reasons than the ones she’s convinced herself of all along.

Shut Up and Dribble

Premiere date: November 3
Watch it on: Showtime
In case you missed it, basketball player LeBron James is now a producer for a docu-series. In Shut Up and Dribble, he tackles some real-life stories about the changing role of athletes in politics. The series’s title stems from James’s experience with a journalist who publicly criticized him for speaking up about politics, telling him to just “shut up and dribble.” With today's political climate and discourse, basketball fans and non-fans alike will find this documentary series fascinating.

Premiere date: November 16
Watch it on: Netflix
The hit series Narcos is heading to Mexico in this highly anticipated spinoff. The show is centered on the origins of the modern drug war plaguing the Central American country. This was originally meant to be Narcos’s fourth season, but instead it’s going to be a whole companion series altogether. If you enjoyed the crime-busting from the original series, then you’re going to love this show that stars Diego Luna and Michael Peña.

Premiere date: November 16
Watch it on: Netflix
From the creators of The Big Bang Theory, The Kominsky Method stars Michael Douglas as Sandy Kominsky, a veteran Hollywood hotshot actor who then becomes an acting coach; and Alan Arkin, Sandy’s agent and friend. The show follows a single-camera setup similar to Modern Family and the cutting humor and bizarre situations makes it a promising sitcom for anyone looking for some laughs.

She-Ra and the Princesses of Power

Premiere date: November 16
Watch it on: Netflix
For a huge dose of nostalgia, She-Ra and the Princesses of Power, the new animated reboot of the 1985 series She-Ra: Princess of Power, will do just the trick. The series follows Adora, a teenage orphan raised by a tyrant ruler. After she stumbles upon a magic sword that transforms her into She-Ra, she has to work together with other princesses of power to free her planet from the rule of her stepfather.

Premiere date: December 2
Watch it on: Syfy
Fans of Game of Thrones won’t want to miss Nightflyers, a sci-fi thriller mix based on George R. R. Martin’s 1980 novella of the same name. The show explores themes of finding other life forms across the galaxy, centered on a team of scientists aboard the Nightflyer, the world’s most advanced spaceship. But what happens when the mission leads them to the brink of insanity, and they realize the horrors they were looking for across the galaxy was inside the ship all along?

Premiere date: December 26
Watch it on: Netflix
Remember Penn Badgley, the guy who played Dan Humphrey on Gossip Girl? Well, he’s back in the TV scene as Joe Goldberg, a bookstore manager who develops a psychotic obsession with student and aspiring writer Beck (Elizabeth Lail). The series follows the two as their relationship progresses—but how far is Joe willing to go to keep Beck in his life? If you enjoyed Gone Girl, then mark your calendars for You’s Netflix premiere!