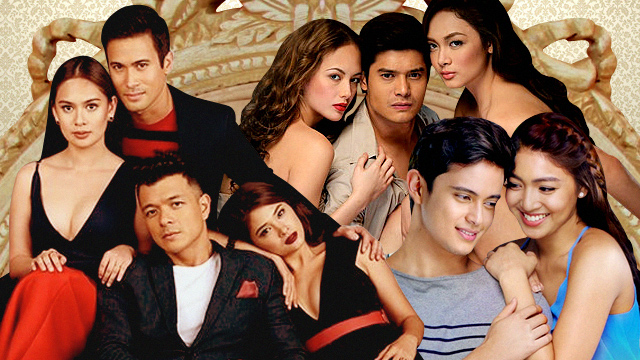 Some of them have been called out by the MTRCB.

are now a big part of Filipino culture. In recent years, local TV shows have evolved with deeper characters and more mature plots. Producers have become braver about pushing the boundaries of censorship, opting for storylines that could be called racy. In fact, there have been a few series that treaded the fine line between Strong Parental Guidance and Restricted ratings. Here are some of the most notable ones.

ABS-CBN's evening drama Halik has been making waves as one of the most-watched teleseryes this year. Topbilled by Jericho Rosales, Yen Santos, Sam Milby, and Yam Concepcion, the show's story revolves around two couples who find themselves into relationship troubles along the way. Aside from its mature themes of marriage and infidelity, the show has a ton of ultra-steamy scenes.

Meg Imperial and JC De Vera pair up in Moon of Desire, in which Imperial plays the role of Ayla, a DJ for an FM radio program called Moon of Desire. Despite her popularity, she remains anonymous and avoids making herself known to her fans. It's because she suffers from hypertrichosis, a medical condition in which a person has excessive hair growth. You can pretty much bet on Imperial to show a lot of skin (and hair).

Kris Bernal takes on a dual role on this show, which is loosely based on the film Sa Isang Sulok ng mga Pangarap (1993) and a remake of a TV show with the same name that aired in 2007. It tells the story of Nimfa, who accidentally commits a crime and eventually undergoes plastic surgery (and ends up looking like Rosette, also played by Bernal, who is married to Homer, played by Rafael Rosell). Nimfa then pretends to be Rosette, with the latter using their likeness to her advantage. With this complicated plot, Impostora didn't seem like it would have any raunchy moments, but some of the show's more daring love scenes caused the MTRCB to summon them for a meeting.

Afternoon drama The Better Half has some familiar teleserye elements (amnesia and fake death, anyone?). Starring Shaina Magdayao, Carlo Aquino, Denise Laurel, and JC de Vera, the show has had its fair share of hot love scenes and it would take a long time to list them all, but this scene between Aquino and Laurel takes the cake.

Remember James Reid and Nadine Lustre as Baste and Iris? In Till I Met You, JaDine played a young couple who fall in love and get married in a short span of time—much to the disappointment of Iris' mom, played by Carmina Villaroel. Both actors were still relatively young and were showing so much skin—especially in this infamous car scene—that the show caught the attention of the MTRCB, who called representatives from ABS-CBN in for a meeting.

A lot of drama, romance, and, of course, a substantial number of sexy scenes round out this primetime drama featuring Jericho Rosales, Arci Muñoz, and John Estrada. Although we all expected some love-making on the shores because of the Magpahanggang Wakas teaser, it was a shower scene between Muñoz and Estrada that really stood out.

With a title like that alone, you know Tubig At Langis would involve some love scenes à la your mom's old romance novels. Based on the '80s movie of the same name, the story centers on the love triangle involving Irene (Cristine Reyes), Natoy (Zanjoe Marudo), and Clara (Isabelle Daza). The shocker is not the plot, really, but the discovery that someone like Daza would be open to doing something like this on national television.

The Millionaire's Wife centers on a young single mom, played by Andrea Torres, who marries an older man out of convenience, just so her son could have a more comfortable life. The plot thickens when their families get in the way, making her life difficult. Apart from the drama, it did give us scenes of Torres and Ina Raymundo competing with each other in swimsuits.

Alyas Robin Hood is our wildcard on this list. Technically, it's about a hooded vigilante who uses his bow and arrow to exact justice. Does that sound familiar? The frequent showing of skin from either Andrea Torres or Megan Young make the show a bit different (and because of that, some might find it pretty hard to focus on the hero, too).