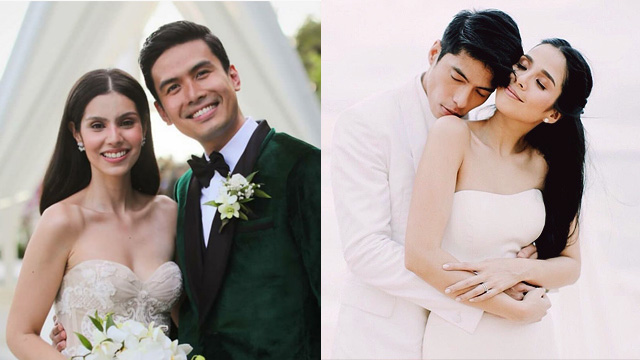 Their exchange of vows made us all fall in love.

(SPOT.ph) As the year draws to a close, we find ourselves reminiscing the most memorable events of 2018—even ones we couldn’t personally attend and only witness through photos and videos online. It was quite a year for weddings, with more than a few high-profile celebrity couples tying the knot in either the most intimate or grandest ceremonies possible. We list down 10 celebrity weddings that made us all swoon.

Wedding dates: January 8 and January 11
After Mananquil popped the question on Valentine's Day in 2017, he and Magalona had two weddings: An intimate church ceremony held at Santuario de San Antonio in Forbes Park attended only by their closest kin, friends, and sponsors; and a picture-perfect beach wedding at Shangri-La's Boracay Resort and Spa. Magalona wore a flowy Vera Wang wedding gown at her Boracay wedding, and her groom and their entourage followed suit in all-white ensembles. The couple also hosted a fun, Coachella-themed dinner for their guests on the night prior to the ceremony.

Wedding date: January 14
Desiree del Valle is best known for starring alongside the likes of John Lloyd Cruz and Jodi Sta. Maria in the teen soap Tabing Ilog and for the kontrabida roles that followed. Boom Labrusca, on the other hand, is a character actor who has had his share of the limelight in a number of TV shows like Flordeliza and La Luna Sangre, as well as a number of local films. You might also know him as the father of rising star Tony Labrusca. Though they've played different roles with different endings in the past, it seems that their own love story had a happy one after dating for five years. The couple finally married each other in a private ceremony in the picturesque Lake Tahoe in the United States early this year.

Wedding date: April 18
Songstress and internationally acclaimed theater star Rachelle Ann Go was on an all-time career high when she met her husband-to-be in 2017. The Miss Saigon and Hamilton actress was introduced to businessman Martin Spies by a common friend, and began dating soon after. Spies was reportedly smitten not only with Go’s beauty and pleasant demeanor, but mostly because of her apparent devotion to God and her family. (Aww!) The couple wed on a summer day in April at the Shangri-La Resort in Boracay. Their union was witnessed by family and friends, as well as Go’s colleagues and closest pals in showbiz, which include Sarah Geronimo, Regine Velasquez, Mark Bautista, Erik Santos, and Kyla.

Wedding date: April 20
As early as 2013, Garcia and Crawford were already fueling relationship rumors. Crawford only confirmed that he was courting Garcia when he shared that he asked her to join him on his trip to the United States. Despite their 10-year age gap, Garcia and Crawford proved that it was a relationship worth fighting for. They tied the knot at Balesin Island in Polillo, Quezon on April 20. The backdrop, created by event stylist Gideon Hermosa, combined whimsical floral arrangements in subtle hues with a mirror flooring, owing inspiration from the French Riviera.

Wedding date: September 8
Sunnies Studios creative director and socialite Martine Cajucom and Australian TV host and producer Cliff Ho had been engaged for a little over a year when they finally tied the knot in Alila Villas Uluwatu in Bali, Indonesia—the same place where Ho proposed to Cajucom. The venue overlooking the deep blue sea was the perfect backdrop for their exchange of vows. She wore a Rosa Clara wedding gown on her big day, and was flanked by her dearest friends and business partners Georgina Wilson, Isabelle Daza, Jess Wilson, and Bea Soriano.

Wedding date: November 17
Like Mr. and Mrs. Mananquil, Christian Bautista and his bride, Kat Ramnani, celebrated their union twice: With an intimate wedding ceremony in Bali, Indonesia and a second reception at the Manila Hotel. Communications exec Ramnani reportedly didn't know of Bautista’s status as a renowned balladeer when they started dating in 2016, and simply assumed he was an up-and-coming singer, having lived in the United States for a long time. They soon found a common passion for running and fitness. Bautista proposed to Ramnani on October 30, 2017 in Venice, Italy, after a year of dating. Of course, a romantic proposal like that can only be met with a just-as-lavish wedding. The bride wore a cream-colored Inbal Dror serpentina gown while Bautista looked handsome in an emerald velvet coat by Francis Libiran during their Bali wedding. For their Manila reception weeks after, they wore elegant and sophisticated complementary outfits in crimson and blush hues.

Wedding date: December 1
Only two weeks after Bautista married Ramnani, his ex-girlfriend, actress, VJ, and HBO Asia host Carla Dunareanu, wed Filipino sportscaster and radio DJ Boom. Dunareanu is best known for her role in the musical TV series The Kitchen Musical. She and Gonzales got to know each other when she worked in Manila as a radio jock at Magic 89.9, where the latter hosted his own radio show. The fun-loving couple tied the knot at Sentosa Resort in Singapore on December 1. Dunareanu posted one of her wedding photos, saying, "Can't wait to laugh our way into old age" and said that she's thankful she's marrying her best friend. How sweet!

Wedding date: December 11
Padilla and Abrenica were already parents to one-year-old Alas when they tied the knot at Villa Milagros in Rodriguez, Rizal earlier in December. Event stylist Gideon Hermosa created the grandiose backdrop for the ceremony and the venue was adorned with candelabras and flowers with a poem by Lang Leav written on the aisle. The setup might just remind you of the party scene in the 1996 Baz Luhrmann film Romeo + Juliet, which starred Leonardo di Caprio and Claire Danes. The actress was a vision in her Mak Tumang wedding gown while her groom looked dapper in a beige patterned suit.  Padilla marched inside the venue as Des’ree’s “I’m Kissing You” played in the background—a song that is part of the abovementioned film’s soundtrack and the perfect tune to start their new life together.

Wedding date: December 17
Lotlot de Leon is every bit a showbiz royalty. She is, after all, the daughter of superstar Nora Aunor and veteran actor Christopher de Leon. She and her Lebanese boyfriend tied the knot one month short of their sixth anniversary as a couple. It only makes sense that she looked every bit a princess during her wedding held at El Jardin de Zaida in San Juan, Batangas. She celebrated her special day with her bridesmaids: Sister Matet de Leon and daughters Janine, Max, and Jessica; as well as her son Diego. Her father and her stepmom Sandy Andolong also watched the blushing bride walk down the aisle.

Wedding date: December 19
And it finally happened: The much-awaited wedding of actress Iza Calzado and her longtime boyfriend, British-Filipino businessman Ben Wintle. The wedding ceremony was held at Club Paradise in Coron, Palawan. Calzado and Wintle wrote their vows on the day of the wedding, which they exchanged in the presence of around 150 guests. With an orange sunset as their backdrop, the bride walked down the aisle in a Rajo Laurel gown with lace details and held a bouquet with a locket that contained photos of her late parents. Before she passed away, Calzado's mom also asked Calzado's close friend (and Encantadia co-star) Sunshine Dizon to keep a gift and give it to Calzado on the day she gets married. (Cue the tears!)