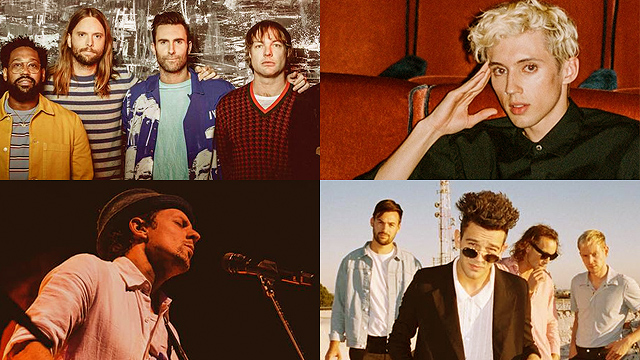 Are your wallets ready?

(SPOT.ph) 2018 was an amazing year with great acts—with Dua Lipa, Sam Smith, Chance the Rapper, and Khalid among those who performed live on stage in front of their screaming Pinoy fans. And it looks like we’re in for another music-filled year because more international artists are stopping by Manila in 2019. We list down the ones that you just can't miss.

When: January 26
Where: New Frontier Theater
It’s hard to believe it’s been 20 years since punk-rock band Taking Back Sunday got together and gave us songs like “MakeDamnSure,” “Cute Without the E,” “You’re So Last Summer,” and “There's No 'I' in Team.” For their anniversary concert, they’ll be performing the tunes you grew up rocking out to. They last performed in Manila for the 2014 Bazooka Rocks 3 festival.
Ticket prices: P4,770 (VIP 1), P3,180 (VIP 2), P2,650 (Loge), P1,690 (Balcony) via TicketNet

When: May 20
Where: Smart Araneta Coliseum
You’d be lying if you said “I Like Me Better” didn’t have you humming all day. Now you can hear it performed live because Lauv is coming to Manila to perform songs from his sophomore album I Met You When I Was 18, like "Paris in the Rain," "Easy Love," "Chasing Fire," and "Getting over You." He was also featured in DJ Snake’s “A Different Way” and has a new song with Julia Michaels called “There’s No Way.” Aside from his Manila concert, he’ll also be stopping by Cebu on May 21 at the Waterfront Hotel.
Ticket prices: P4,760 (VIP), P3,700 (Patron), P2,640 (Box Premium), P2,115 (Box Regular) via TicketNet

When: July 24
Where: TBA
It seems like LANY makes it a point to stop by Manila every year—and we’re not complaining. The band is coming back to Manila after performing for two nights at the Smart Araneta Coliseum in 2018 and in multiple Ayala Malls in 2017. This time, they’ll be playing new songs off their third studio album Malibu Nights, which include the titular song, and the hit single, “Thru These Tears.” of course, you can expect to hear "ILYSB," "Super Far," and "Good Girls," too.
Ticket prices: TBA

When: September 11
Where: Mall of Asia Arena
Pinoy fans can count themselves lucky because after The 1975 released their brand-new album, A Brief Inquiry Into Online Relationships, they also included a stop to the Philippines for their tour. The British pop-rock band is sure to play their hit songs like "Girls," "Robbers," "Chocolate," and "Somebody Else," along with their newer releases.
Ticket prices: P7,200 (VIP Standing), P6,900 (Patron), P6,400 (Patron Center/Lower Box A Premium), P5,900 (LBA Regular), P5,400 (LBB Premium), P4,900 (LBB Regular), P2,700 (Upper Box Premium), P2,100 (Upper Box Regular), P1,400 (General Admission) via SM Tickets