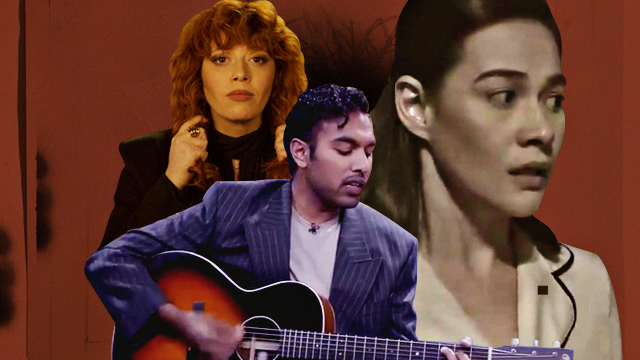 10 Movies and TV Shows That Everyone's Been Talking About

To get you up to speed.

(SPOT.ph) So many new TV shows coming in, so little time! By now you've probably seen the sudden surge of original movies and TV shows, each one tempting you to binge-watch all day. Given the number of reboots and adaptations over the past year, it’s a nice change to get a monthly batch of new movies and series that look like they can hold your interest through hours of couch time. Here are a few of them.

The much-awaited sequel to Avengers: Infinity War just dropped a surprise trailer before its premiere on April 24—hyping everyone up even more. Earth’s Mightiest Heroes are given one last chance to save humanity from their greatest enemy yet. Plus, Captain Marvel joins the gang, making this the most exciting superhero film to date. And ICYDK, it's opening two days earlier in the Philippines than most parts of the world!

This Groundhog Day-like Netflix show follows Nadia (played by Natasha Lyonne) as she dies and reawakens repeatedly on her 36th birthday. As the show progresses, the mystery behind her multiple deaths will unfold like Matryoshka dolls, slowly yet surely unravelling something new in every episode.

Starring none other than Bea Alonzo and Charo Santos-Concio and directed by Mikhail Red of Birdshot, Eerie sets high expectations for Filipino horror movies. Alonzo plays Pat, a clairvoyant guidance counselor of an all-girls Catholic school who helps students cope with the death of a fellow student. She's faced with threats from the school's head nun (played by Santos-Concio). Pat’s investigation leads to a missing piece that unravels the mysteries of not just the dead student, but of the whole school. So, if you're a horror fan, you'll want to mark your calendar for its March 27 release date.

Expectations are high as Disney remakes another one of their classics. Aside from the thieving Aladdin to be played by Mena Massoud and Naomi Scott’s Princess Jasmine, our favorite, eccentric Genie is played by the one and only Will Smith. Famed childhood classics like “A Whole New World” will definitely be taking centerstage along with a few new songs written by songwriters from La La Land to bring this beloved film to life once more.

Adapted from the comic book of the same name by Gerard Way (of My Chemical Romance fame) and Gabriel Bá, the series features the seven adopted children (which includes Robert Sheehan and Ellen Page) of a wealthy eccentric named Sir Reginald Hargreeves, all of whom are gifted with superhero abilities. Seventeen years later, they are reunited by his death and are forced to team up to stop a looming apocalypse—they just need to overcome their own differing opinions. Mary J. Blige also stars as a scene-stealing assassin.

Imagine being kidnapped not once, but twice—and by your own neighbor, no less. This documentary features the real-life abduction of Jan Broberg and her family's emotional turmoil as they tell of her disappearance and the investigation that led to her discovery. The disturbing turn of events will have you going, "WTF?!"

What audiences probably thought would be another romantic film churned out the most confusing yet unique trailer yet. Ulan stars Nadine Lustre and Carlo Aquino, both of whom have branched out from their respective love teams and their string of successful movies. In this artsy romance and coming-of-age film, Maya (Lustre) is a writer who grows up with a superstitious grandmother who believes in folklore and mythical creatures. After failed romances, she meets Peter (Aquino), who makes her rethink everything she believes in.

If you remember that picture of a sad-looking, cheaply made cheese sandwich that went viral all over social media, then surely you’ve heard of the biggest disaster in festival history. Fyre shows the rise and fall of what could have been the festival to change all festivals, which it definitely was, what with their inflated ticket prices, stranded festival attendees, refugee tents, and angry workers.

Yesterday follows the story of a struggling musician named Jack Malik (Himesh Patel) who, during a worldwide blackout, is hit by a bus and sent to the hospital. When he wakes up and eventually recovers, his best friend Ellie (Lily James) gives him a guitar and he plays the song “Yesterday” by The Beatles, or at least, that’s who he thinks the song is from. He's now living in a world where the English rock band never existed—which confuses him—but not without catapulting him into instant singer-songwriter fame. The movie opens on June 28.

From the director of Ang Kwento Nating Dalawa comes the continuation of the open-ended love story between Sam (Nicco Manalo) and Isa (Emanuelle Vera). Director Nestor Abrogena has released two trailers for the film, with one set five years into the future showing Sam walking alone along Ayala Avenue; a continuum from his tender taxi and LRT rides with Isa. The second trailer then shows them both reunited at a party talking to each other; Sam with a surprised look on his face as he watches and listens to a gleaming Isa as she tells him a story we can’t hear. Will they finally get the happy ending they both clearly want?