10 TV Shows You Probably Haven't Heard of But Are Worth Watching
Loading
Already a member? Log in
No account yet? Create Account
Spot.ph is your one-stop urban lifestyle guide to the best of Manila. 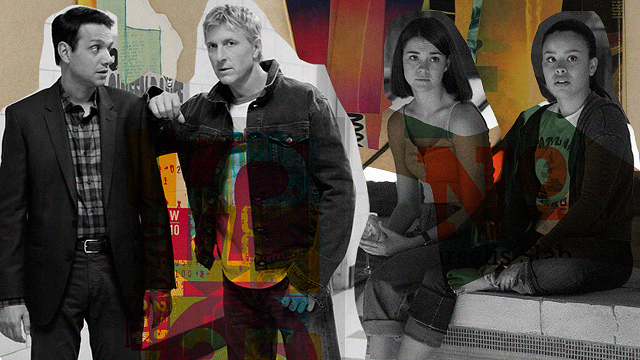 10 Under-the-Radar TV Shows You Should Check Out

(SPOT.ph) Looking to add shows to your to-watch list? We’ve put together some must-watch titles you might have glossed over while looking for your next binge-watch contender. Or perhaps, something to tide you over until the next episode of Game of Thrones.

We round up 10 under-the-radar TV series that definitely worth checking out:

The Darren Star-created TV series stars Sutton Foster, Hilary Duff, Nico Tortorella, and Peter Hermann. The TV land show, based on the novel of the same title by Pamela Redmon Satran, is now on its sixth season. The story revolves around 40-something Liza (Foster) who pretends she’s 20-something so she can get a job at a publishing house. As you can tell from the premise alone, it gets pretty interesting as Liza tries to navigate her life, careful not to merge her 40-year-old self with her much younger alter ego.

This remake of the 1975 classic is produced by Norman Lear, who created the original American sitcom. This time around, a newly-single mother Penelope (Justina Machado) raises her teen daughter and tween son with the help of her old-school mom Lydia (Rita Moreno). It’s a great show about three generations living together and all the ups and downs that come with it.

If you want a break from all the true crime shows you’ve been watching, get ready to laugh out loud with the hilarious Roses. Video store magnate Johnny (Eugene Levy) along with his soap opera actress wife Moira (Catherine O’Hara) and two children David (Daniel Levy) and Alexis (Annie Murphy) suddenly find themselves penniless after their business goes kaput. They’re forced to live in a tiny town called Schitt’s Creek—the only possession to their name, which Johnny bought as a joke for David’s birthday. Watch as they try to adjust to their new life and meet all the kooky characters they encounter along the way.

This Freeform drama is a spin-off of the long-running series The Fosters, about a same-sex couple who raises foster kids together. This time focusing on Foster sisters Mariana (Cierra Ramirez) and Callie (Maia Mitchell), the show follows their newly minted careers in Los Angeles. Mariana tries to make it as a programmer in a startup, battling issues like gender pay gap and sexism in the workplace. While Callie struggles to make an impression as a clerk on her ultra-conservative judge. P.S. Noah Centineo, who plays their brother on The Fosters, makes a guest appearance on the show.

If you’ve ever wondered what it’s like to work at a women’s magazine, look no further. Joanna Coles, who held the position of Editor in Chief for Cosmopolitan, is the executive producer of the show, so you know there is some truth to the series’ storylines—no matter how crazy they can get. The show follows three staffers Jane (Katie Stevens), Kat (Aisha Dee), and Sutton (Meghann Fahy)—who are also best friends—as they go through life at Scarlet, a global women’s magazine. Fun fact: Jacqueline (Melora Hardin), the editor on the show, is based on Coles.

From the same creator of House comes this TV series about a surgical resident who struggles with autism and savant syndrome. The show is based on a South Korean drama of the same title. Shaun (Freddie Highmore) has difficulty in communicating and connecting with the people around him, but his condition also lends him extraordinary skills in medicine which actually makes him a good doctor. Find out how Shaun deals with his doubtful colleagues as he proves to them that he's more than what he seems.

Anyone who grew up wearing cargo pants and baby tees with their platforms will get full-on flashbacks when they watch this show. Created by 30-year-olds Anna Konkle and Maya Erskine, they play their 13-year-old selves in this scarily accurate depiction of middle school in the 2000s. From bad haircuts and awkward first kisses to girl drama and online friendships, the Hulu show explores the uncomfortable but nostalgic memory of what it’s like to be a teen girl.

Every fan of reality TV needs to watch this behind-the-scenes look at something right out of The Bachelor—in this case, Everlasting. It stars Shiri Appleby as Rachel, the producer who will stop at nothing to make good television. And when you’ve got an executive producer like Quinn (Constance Zimmer), who gives out bonuses for nudity, 911 calls, and catfights, you will go through great lengths to give her exactly what she wants. Curious to know what makes Rachel the best producer on the show? Start binging now.

This American comedy on YouTube Premium is based on the movie Karate Kid. It stars the original characters and rivals from the 1984 film Johnny (William Zabka) and Daniel (Ralph Macchio). Daniel is now a successful businessman but struggles to find balance without his mentor Mr. Miyagi. Johnny reopens Cobra Kai karate dojo 34 years after the original movie takes place. Enter a new generation of karate kids.

The Black-ish spin-off stars Yara Shahidi as Zoey, the eldest daughter of the Johnson family, who is about to start her freshman year in college. She soon finds out that not everything will go according to her plan and her entitled self needs to learn how to deal. The show follows her as she navigates her way through drugs, sex, and relationships. It also stars Franca Raisa, Luka Sabbat, Trevor Jackson, Emily Arlook, Jordan Buhat, and Chloe and Halle Bailey.