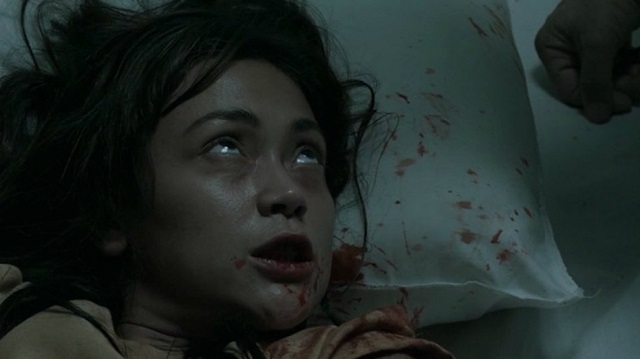 We Need to Talk About the Clarita Trailer

It's based on real life, and it's giving us the chills.

(SPOT.ph) Horror films have always been a draw for Pinoys, and no, we're not just talking about Shake, Rattle & Roll. The number of local horror movies released this year just keeps on growing, with Mark Meily's Maledicto, and Erik Matti's Eerie and Kuwaresma leading the pack. The newest on the list is the upcoming Clarita, starring Jodi Sta. Maria and directed by Derick Cabrido, whose blood-chilling trailer is so terrifying, it's already giving us nightmares.

The trailer features snippets of Clarita (Jodi Sta. Maria) being attacked by a malevolent force. Not much is given away, but it appears even the priests who are helping her aren't strong enough. We also see a few shots of old Manila, with '50s-era cars, hospitals, and churches adding to the trailer's creepy feel. Here's the clincher, though: the story revolves around events that happened in real life.

The movie is based on the true story of Clarita Villanueva, a young woman who claims to have been attacked by demons in the '50s. While in the city jail for minor charges, Villanueva was supposedly attacked by two demons, leaving bite marks on her body. The attacks continued even when faith healers and medical doctors were called in. Her story shocked the entire country, with then Manila Mayor Arsenio Lacson paying her a visit to see whether Villanueva was for real. Villanueva's story became part of Manila lore and in 2016, it was featured in Kapuso Mo, Jessica Soho. The 20-minute episode was also directed by Cabrido, who is now turning the story into a full-length film.

Jodi Sta. Maria, who's most well-known for the afternoon telenovela Be Careful With My Heart, stars as the deeply troubled Clarita. This isn't her first foray into horror though, having starred in comedy-horror Cinco (2010) and Second Coming with Marvin Agustin, released earlier this 2019. Based on the trailer alone, with her expressions flitting between fear, pain, desperation and pure terror, it's clear we're about to see a different side to this actor.

Finally, Clarita is a horror film set under Black Sheep, a division of ABS-CBN films that was announced just last year in 2018. It's the same brand that brought you love stories like Exes Baggage, Alone/Together, and the recent blockbuster Between Maybes. Black Sheep specializes in producing films meant for the millennial generation—which means Clarita is sure to bring a different beat to the horror genre.

No official release date has been announced, but you can follow the official Black Sheep Facebook Page for more updates.