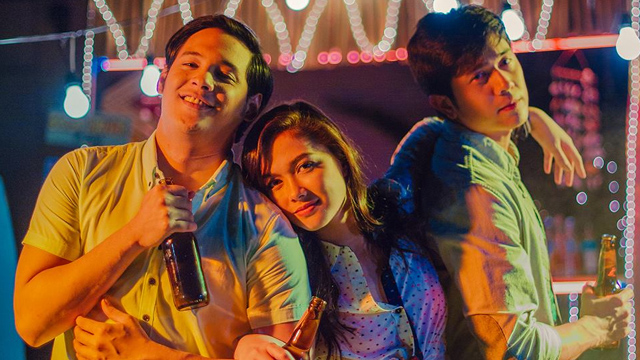 (SPOT.ph) Microcinemas can provide solace when mall theaters and bigger cinemas are packed with people. Aside from getting to watch films in a more intimate setting, these smaller venues also give you the chance to catch local films that don't usually screen in malls. Cinema '76 is bringing films from TBA Studios to BGC, and this time around, you can catch reruns of old TBA titles in Eastwood at Eastwood Central Plaza on August 30.

Cinema '76 announced the outdoor screening on their Facebook page.

Tickets are priced at P300. Seats are limited, so pre-reserve tickets while you still can! Only the first 120 pre-registrants will be given guaranteed reservation. Registration and claiming of tickets starts at 5 p.m., followed by a program at 6 p.m.

Here are the two films you can watch at the otudoor cinema:

Carson, played by Maja Salvador, has been in love with her best friend Dio, played by Paulo Avelino, for seven years. As the number of days to college graduation dwindle and the uncertain future looms near, they take one last road trip to La Union for a music festival. Carson begins to question what the future has in store for them as individuals, and plans to settle her unresolved feelings for Dio once and for all. The JP Habac film features local artists like Ebe Dancel, Johnoy Danao, Shirebound & Busking, Ang Bandang Shirley.

For overseas Filipino workers, a lot of sacrifices must be made so that those back home can be provided for, and Filipino domestic helpers in Hong Kong work themselves to the bone just to send money back to the Philippines. They get a change of pace though, once Sunday arrives and they are allowed to parade their pretty dresses and hidden talents in a weekly Sunday pageant. A story of struggle, sacrifice, and pain, interspersed with cheeky jokes and slivers of hope, the 2016 Metro Manila Film Festival entry shows the reality and resilience of the OFW based in Hong Kong.