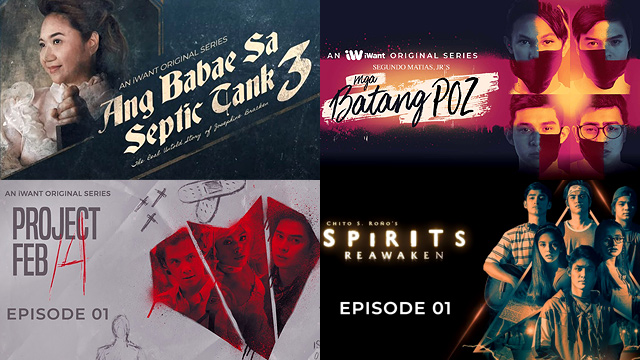 10 iWant Originals You Need to Watch

These local series deserve a watch!

(SPOT.ph) Though watching television at the end of a long day can be relaxing, there are times you’d much rather sleep during weeknights and choose to unwind on the weekend. Streaming has made it possible to binge-watch your favorite TV shows and dramas whenever and wherever you want, and we get the need to constantly be on the lookout for new things to watch. You’ve got your staples, but if you’re in the mood for local viewing options, we rounded up 10 shows you can stream on iWant to add to your watchlist.

Here are 10 iWant original series for you to stream:

You may have seen Eugene Domingo play herself as an aspiring star actress in the Metro Manila Film Festival entries Ang Babae Se Septic Tank and Ang Babae Sa Septic Tank 2. She’s back to play the same ambitious actress on a series with producing and directing and…several other credits this time around.  The series looks at how a movie is made through the lens of humor and exaggeration, along with being a cheeky take on historical biopics. If you’re wondering who’s playing Jose Rizal to her Bracken, Domingo casted Tony Labrusca.

The 2004 teleserye Spirits might come to mind and rightly so, because Spirits Reawaken is an homage to the first ever supernatural teen adventure serye. Much like the original, the 2019 series features a cast of seemingly normal teens with extraordinary super powers as they take on supernatural adventures in order to defeat evil. The new cast stars Grae Fernandez as Red, Jairus Aquino as Jesse, Bugoy Cariño as Nato, Kira Balinger as Maya, Chantal Videla as Gabbie, and Patrick Quiroz as Lloyd. Spirits Reawaken also uses Rivermaya’s "You’ll Be Safe Here" as its theme song, the same as the original, for maximum nostalgia.

Technology has become an integral part of our lives, but there are times when it’s best to step back and disconnect. This anthology features a different storyline and cast per episode (which include Janella Salvador and Pokwang) and mirrors how technology saves our lives, but also warps our perception of reality, experiences, and relationships. From dating and online personas to even home improvement, Touch Screen explores the repercussions of depending too much on gadgets.

Life is short. You never really know when your last day on earth will be and it’s pretty sobering to realize there’s actually so much you want to say or do in the company of those you love. Another anthology that focuses on different stories and casts per episode, The End tackles the brevity of life. Featuring plots on friendship, family, tragedy, and even extrajudicial killings, this series will compel you to make the most out of every second. It stars Denise Laurel, Aljur Abrenica, Carmi Martin, Luis Hontiveros, Mark Neumann, Kazel Kinouchi, Sunshine Dizon, Vandolph, and Joey Marquez.

This series stars Arjo Atayde as Benjo Malaya, an honest barber just trying to make ends meet. His life changes when a group of men ask him to follow the governor and kill him in exchange for his family’s safety and a hefty sum of money. Delving deep into the dark underbelly of politics and paid crime, Bagman shows how far desperate people must go just to get by, and how easy it is for authorities to take advantage of this.

Get ready to walk along the familiar halls of your high school because this series will remind you of those days. Shaina Magdayao plays Shantal Mae Baltazar, an author struggling with writer’s block. In order to overcome this obstacle, she turns to her high school past and revisits her 15-year-old self, played by Loisa Andalio, with the hopes of finding new material to follow up her successful first book. Written and directed by Dwein Baltazar, this series is filled with dreams, aspirations, and realistic portrayals of drawbacks and comebacks, and encourages you to look at your past to help you with your present.

Earthling Jhon, played by Pepe Herrera, is average at best with his everyday jobs and mundane life. All of that is thrown out the window when he encounters Princess 223, played by Arci Muñoz, the alien princess of Mars who stumbles upon Earth and falls in love with him. The intergalactic comedy is interspersed with lessons on life and love and will have you laughing at all the theatrics. With Rufa Mae Quinto playing a Martian leader, how could you not?

Directed by Jason Paul Laxamana, this twisted love story shifts the focus to Brix and Annie, played by McCoy De Leon and Jane Oineza, a sexually adventurous couple that wants to inflict harm on others before willingly dying. They plan to broadcast their project on Valentine’s Day and filmmaker Cody, played by JC Santos, thinks he can make a documentary out of their convoluted relationship. Provocative and mysterious with just the right amount of wild, this horror-esque drama will keep you on the edge of your seat.

HIV, or Human Immunodeficiency Virus, is still a taboo topic and has kept people from openly discussing their sexual health. This series follows the struggles and challenges HIV-positive, or poz, kids go through, in terms of health, life, family, finances, and love. It also questions the stigma around sexuality and health, with the advocacy of educating more people about it and prompting conversations. Unafraid and straightforward, Mga Batang POZ examines the lives of HIV-positive friends, played by Mark Neumann, Fino Herrera, Awra Briguela, and Paolo Gumabao, as they search for acceptance and companionship to tell a story that is real, raw, and understanding.