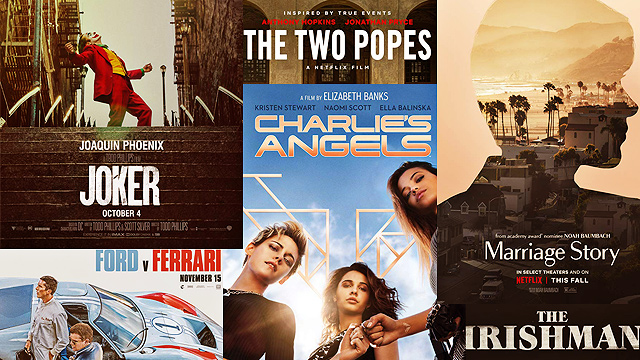 15 Exciting Movies to Catch in the Last Quarter of 2019

Check out the most exciting films that are closing the year!

(SPOT.ph) With Avengers: Endgame marking the end of an era, The Favourite winning big at the Oscars, and Parasite's unexpected twists and turns, 2019 has been a great year for films. Good thing for movie fans, it's far from over and there’s still a lot to be excited about. What are the films hitting screens in the last quarter of the year that we're most looking forward to? Here's our must-see list.

Release date: October 2
It’s 1981 and failed stand-up comedian Arthur Fleck (Joaquin Phoenix) struggles to overcome his negative thoughts, and eventually succumbs to a life of crime in Gotham City. Shedding his makeshift clown costume, Fleck’s mental health spirals and he becomes the Joker. The psychothriller is a unique take on the Joker’s origin story as director Todd Philips wanted to put a new spin on the familiar character. Fun fact: The film won the Golden Lion, the highest award given by the Venice International Film Festival.

Release date: October 9
Top-class government assassin Henry Brogan, played by Will Smith, is on the road to retirement, but finds himself going against an unknown operative who is able to predict his every move. Desperate to complete the mission, he uncovers a shocking truth: the elusive assassin is actually his clone, but both of them have no clue why they’re being commanded to hunt each other down. Directed by Ang Lee, this film also stars Mary Elizabeth Winstead, Clive Owen, and Benedict Wong.

Release date: October 16
Set five years after the first film, Princess Aurora (Elle Fanning) accepts the proposal of Prince Philip (Harris Dickinson), but Maleficent, played by Angelina Jolie, can’t find it in her heart to trust the prince. Queen Ingrith of Ulstead (Michelle Pfeiffer), mother of Prince Philip, insists the world of humans is where the princess belongs, but Maleficent senses a scheme brewing. With Maleficent and Aurora on opposite sides, they begin to question if they can truly be family.

Release date: October 18
Ellen Martin (Meryl Streep) looks forward to her dream vacation, but ends up investigating an insurance fraud. The covert dealings trace back to the Panama City law firm Mossack and Fonseca run by charismatic lawyers, played by Gary Oldman and Antonio Banderas. The film is a comedic look at the Panama Papers, a global network of leaked documents containing the fraudulent and illegal transactions of almost 200,000 entities.

Release date: October 30
The war against the machines persists 27 years after the events in Terminator 2: Judgment Day (1991). An enhanced liquid metal Terminator (Gabriel Luna) from the future in order to terminate Dani Ramos (Natalia Reyes). Sarah Connor (Linda Hamilton) and the original Terminator (Arnold Schwarzenegger) aid supersoldier from the future Grace (Mackenzie Davis) in protecting her to prevent a larger conflict in the form of Judgment Day.

Release date: November 1
Based on several plays from William Shakespeare’s Henriad, this film stars Timothee Chalamet as Hal, a prince who has turned his back on royal life only to eventually assume the throne after his father’s death. Now crowned as King Henry V and forced to rely on men conspiring against him, he trusts no one as he navigates the politics, controversies, and war affairs his father left behind. Directed by David Michôd, this movie also stars Joel Edgerton, Sean Harris, Ben Mendelsohn, Robert Pattinson, and Lily-Rose Depp.

Release date: November 13
The racecars of Enzo Ferrari are undefeated in the tracks. American car designer Carroll Shelby (Matt Damon) plans to change that by enlisting the help of fearless British-born driver Ken Miles (Christian Bale). Together, they create a revolutionary racecar for Ford Motor Company that can beat Ferrari at 24 Hours of Le Mans in France in 1966. Based on a true story, the film gives a glimpse of Shelby and Miles’ valiant efforts to bend the laws of physics and do the impossible in just 90 days.

Release date: November 14
Directed and written by Elizabeth Banks, the film serves as a continuation to the Charlie’s Angels films and television series. The Townsend Agency has expanded their services and protection to a global scale where several groups of angels are sent on missions. When news of dangerous technology threatens to cause harm, Sabina Wilson (Kristen Stewart), Elena Houghlin (Naomi Scott), and Jane Kano (Ella Balinska) join forces under the tutelage of Susan Boseley (Banks) to protect mankind. Keep your eyes peeled for To All the Boys I’ve Love Before’s Noah Centineo and The Hunger Games' Sam Claflin in this film, too!

Release date: November 20
Oscar winner Helen Mirren and Oscar nominee Ian McKellen star in this film by Bill Condon, which is based on a novel of the same name by Nicholas Searle. Seasoned con artist Roy Courtnay (McKellen) can hardly believe his luck when he meets wealthy widow Betty McLeish (Mirren) online. Roy finds himself caring more for Betty, making it harder to accomplish his original goal of stealing her fortune.

Release date: November 27
Doctor Sleep is the sequel to the 1980 horror film The Shining, both based on the novels of Stephen King. Written, directed, and edited by Mike Flanagan, this film is set several decades after the events of The Shining and borrows heavily from the novel and the original film. Still traumatized from his experiences at the Outlook, Dan Torrance, played by Ewan McGregor, has struggled to find peace in adulthood. Disruption comes in the form of Abra (Kyleigh Curran), a teenager who shares his gift of the "shine." Together, they face their fears and fight against Rose the Hat (Rebecca Ferguson), leader of The True Knot—a cult eager to use their powers for immortality.

Release date: December 4
Game of Thrones’ Emilia Clarke and Crazy Rich Asians’ Henry Golding pair up in this Christmas movie. Kate (Clarke) is bitterly living her life and has grown to dislike her job of being an elf at a Christmas shop. Her days begin to turn up upon meeting Tom (Golding), a guy who seems too good to be true. He slowly breaks down her walls and reignites her passion for living, all set against the backdrop of Christmas in London. Bonus: Michelle Yeoh is in this one too!

Release date: December 6
Charlie (Star Wars’ Adam Driver) and Nicole (Avengers’ Scarlett Johansson) are absolutely in love and try their best to make their marriage work. That is, until it doesn’t. Exploring themes of commitment, marriage, and relationships, this film examines how a marriage crumbles, bit by bit.

Release date: December 20
Anthony Hopkins stars as Pope Benedict XVI and Jonathan Pryce as Cardinal Jorge Mario Bergoglio, or the future Pope Francis in this biographical comedy-drama. At the cusp of monumental change in the Catholic Church, the two talk of the responsibility of being Pope as well as the position’s role in these changing times as one Pope retires, and a new one emerges.