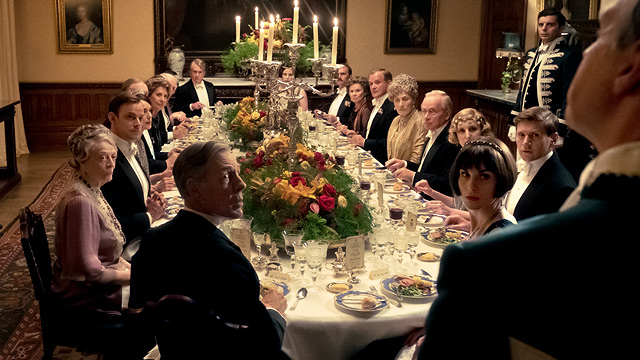 The posh period drama will sweep you off your feet.

(SPOT.ph) It’s been four years since we last saw the Crawley family on the British historical drama series. Downton Abbey took us into the lives of the people living in and around a majestic manor during the Edwardian era—exposing the romance, intrigue, and scandals of the ladies of the house, their family, as well as the staff who served them.

The series, which opens with the sinking of the Titanic in 1909, moves forward in time to 1927 for the film—just before the Great Depression. It reintroduces the entire Downton cast, as it prepares to orchestrate a lavish dinner to entertain their illustrious guests, their Majesties King George V and Queen Mary. Fans of the show will slip right back into the familiar setting, while newcomers to the Downton universe will have reason to binge-watch the British melodrama once they’ve seen the movie. Here’s why:

The gorgeous shots of Downton Abbey

Downton Abbey is made up of an ensemble cast, but the unsung hero of the show—not unlike New York in Sex & the City—is Downton Abbey itself. The movie offers luscious drone shots of the Jacobethan era Highclere Castle, which inspired creator Julian Fellowes to pen the show. Captured in bright daylight and at night, the panning in and around the castle will make you want to ship yourself straight to England.

The Downton Abbey theme is so distinctive, it will leave you with a classical earworm you won’t forget. The movie takes the popular theme and multiplies it to a hundred, giving it a cinematic, symphonic movie makeover that’ll gently lull you into the world of the Crawleys.

Once you see Lady Mary in her streamlined, Art Deco flapper costumes, and Lady Edith coming into her own in her golden-hued threads, you’ll want to go the roaring '20s route in time for 2020. The show’s costumes are meticulously curated and are a definite piece of eye candy.

The subtle digs and witty banter

If you appreciate a bit of wry British humor, you’ll love the movie for the playful verbal spats between Violet and Isobel, the grand dames of the house. “Sarcasm,” according to Violet, “is the lowest form of wit.”

Woke culture was not as prevalent in 2009 when the TV series launched as it is today. But the latest iteration of the movie has young cook Daisy, opening up about her staunch distaste for the monarchy. It’s fun to see how the shrinking violet of the TV series has grown up to speak her mind and stand up for her beliefs.

The Pomp and Circumstance

For the most part, Downton Abbey (the series) has highlighted the rich and all the bells and whistles that come with being rich. The movie, however, puts our wealthy landlords in their proper place by reeling in new characters who are infinitely wealthier than the Crawleys—the King and Queen. We get a sneak peek at exactly how much work goes into serving the royals as they infiltrate Downton’s halls.

Tom Branson getting a life

Chauffeur-turned-family member Tom caused quite the scandal in the TV series when he married the Crawley’s youngest, Lady Sybil. Now considered an irreplaceable member of the family, it’s interesting to see how the movie takes Tom’s storyline from widower to negotiator to romantic lead again.

The staff staging a revolution

We’re just as invested in the “downstairs” family as we are the Crawleys, and this time around, we see them rising up in arms to protest the injustices brought upon them by the royals’ staff. With Bates and Anna leading the revolt, and stuffy butler Carson unwittingly being wheeled into all the staff’s shenanigans, everyone will want to root for the underdogs to become heroes in their own right.

Downton Abbey has never been without its fair share of comedy, and we can thank hapless teacher (former butler/valet/footman) Molesley for bringing on the laughs. His interactions with the Crawley family and their guests infuse the movie with some lighthearted fun, and pave the way for a surprising cameo you won’t want to miss.

A callback to the old and the new

Downton Abbey makes a case for history, and how certain institutions stay with us, no matter how the world turns. It presents a lovely escape from real life, and gives us a polished glimpse of life a hundred years back.