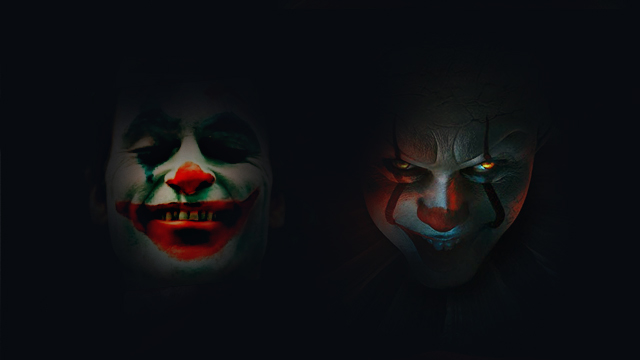 (SPOT.ph) Have your balloon animals, trick flowers, colorful clothes, and painted smiles ready, because thanks to Joker and It: Chapter Two, it is clown season once again! Not just any clowns, but the scariest, most terrifying clowns to ever grace the big screen. From cult classics of the '80s to modern horror films, clowns have become a part of the many figures of fear in cinema. We’ve assembled a clown car of the 10 most frightening clowns in movies—all nightmare fuel in their own bloody, haunting, and spine-chilling way.

Here are 10 of the most terrifying and nightmare-inducing clowns in movies:

While not exactly the main baddie of this horror classic, its impact has been just as powerful as the titular villains. Before Annabelle scared kids of today’s generation, the '80s had to deal with a different kind of doll—a possessed clown doll. Ranked as one of the scariest moments in horror, a clown doll comes to life and attacks a young boy in his bedroom. The perpetually smiling doll turns menacing and creepy; the stuff of nightmares. The clown attack was such a big part of the 1982 film that the 2015 remake used a similar-looking clown as a big part of its marketing, terrifying a new generation of audiences.

On a Halloween night, a couple of kids discover an unmarked videotape among their Halloween candy loot. Against all common sense, the kids’ babysitter plays the tape, showing short films that feature a homicidal clown named Art. In one, he kidnaps a girl and takes her to a torture room, and in another, he’s slashing away at his victims. Art is gross, terrifying, and mysterious, which only adds to his scariness. Thanks to The Ring, we all know what happens when a mysterious videotape of a demonic being is played—and All Hallow’s Eve is no exception.

A supervillain in the universe of the Spawn comics, Violator is a demon who presents himself as a short, overweight clown that guides Spawn into hell. Manipulative, gross, and sick, Violator is not one to take lightly. Played with disgusting glee by John Leguizamo, the live-action version of Violator is more nightmare-inducing than the comics version, and what’s even more terrifying is that this clown can turn into a scary, fanged monster from hell when he wants to reveal his true form.

The clown-killer in Clown is a bit different from the rest of the list in that the character of Kent McCoy just wanted to make his kid happy by donning a clown outfit he found. Turns out, the clown outfit has a demon that possesses the wearer and makes them hungry for human flesh, specifically a child’s. When Kent gets possessed by the suit, he starts stalking kids and, well, you know how that goes. Before directing the ultra-successful Marvel Cinematic Universe’s Spider-Man films, director Jon Watts directed and co-wrote this low-budget thriller that’s sure to give viewers nightmares.

Played by character actor Sid Haig, Captain Spaulding is a murderous clown who is the patriarch of a similarly murderous cult family. In the first film of Rob Zombie’s terrifying trilogy (House of 1000 Corpses), Captain Spaulding is introduced as the proprietor of the Museum of Monsters and Madmen. If that doesn’t sound creepy enough, he lures unsuspecting visitors into the hands of his Firefly family, a group of deadly murderers. Spaulding takes a more central role in the sequel, The Devil’s Rejects, where Spaulding and his family go head-to-head with police. Capable of extreme torture and just being straight-up disgusting, Spaulding is considered an icon of modern horror.

When a bunch of kids at a 10th birthday party ridicule and then accidentally kill the clown performing at the boy’s party, the clown—named Stitches—comes back to life years later to seek revenge on the children who mocked him and caused his death. What follows is a crazy slasher film in which Stitches attacks the kids—now teenagers—and disposes of each one in ways only a zombie-demon-clown can concoct, from turning intestines into a balloon animal, and pulling a rabbit out of someone’s throat, to making a human-brain sundae complete with blood sauce. Yes, it sounds as disgusting as it is, making Stitches a clown to really fear.

The idea that there are Killer Klowns from Outer Space ready to take over the Earth is terrifying enough, but it is their leader that really should be feared. Jojo the Klownzilla is smarter than his army of killer klowns, and he’s also bigger. At 18 feet high, the Killer Klown leader rivals the likes of Godzilla, and could destroy entire cities. These murderous clowns from the cult film Killer Klowns from Outer Space may look ridiculous, but that doesn’t change the fact that they will straight up kill humanity and harvest their organs. Armed with poisonous pies, popcorn guns, and cotton-candy cocoons, these Killer Klowns really stayed in theme!

In the 2010s, there was a rise in “creepy clown sightings” all over the world. Whether this was just people messing with others or a really creative marketing ploy for It, who knows, but what the world did know was that there were people dressed up as clowns roaming the streets, scaring whoever spotted them. A certain clown named Wrinkles, who lives in Florida, has become a well-known figure in the creepy clown section of the Internet. Wrinkles the Clown, for a fee, could be hired to go to people’s houses to prank unsuspecting victims as well as scare misbehaving children. His business grew so large that a documentary has been made about him, titled after the horrifying real-life creepy clown himself.

2. Pennywise in It and It Chapter Two

Tim Curry’s version of the child-eating Pennywise in the 1990 It miniseries is legendary, but Bill Skarsgård managed to not only put his own devilish spin on the clown but be a completely different style of terrifying in the It films (a reboot in 2017 and a sequel in 2019). Gone are the cutesy clown clothes and simple makeup, replaced instead with more elaborate face-paint, an unnatural head, and a ghostly outfit. A master at terrifying the residents of Derry, Maine, Pennywise can shapeshift into the things that scare anyone depending on their own fears, aside from opening his mouth wide enough to show his nasty teeth and devour his prey. Pennywise is not only one of the scariest clowns, it is among the most memorable monsters in film.

Unlike Jared Leto’s or Heath Ledger’s recent versions of the Clown Prince of Gotham, Joaquin Phoenix’s Joker is an actual clown by profession, performing for hire while wearing full-on clown gear. This Joker in Todd Phillips’ 2019 film named after Batman’s most famous villain is an aspiring stand-up comic as well. When society starts coming down hard on Joker, he puts on his clown makeup and wreaks havoc around Gotham City in cruel, often unpredictably violent ways, targeting those who have wronged him. Phoenix’s portrayal of Joker is spine-chilling, and makes this version of the Joker among the scariest clowns in cinema due to his unpredictable nature.