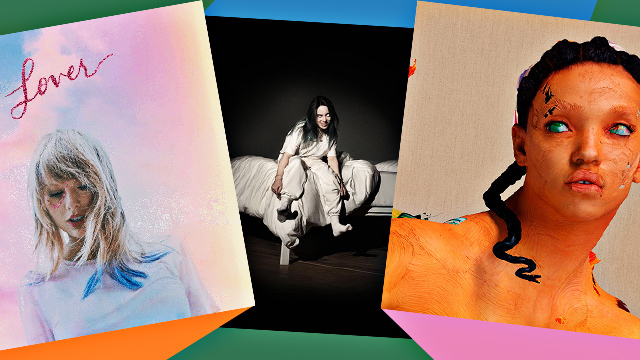 (SPOT.ph) 2019 has been a rollercoaster year in music. With the continuing dominance of streaming, music has become so easily accessible and deeply ingrained in our daily lives. We’ve also seen genre lines become more and more blurred—nowadays, you could end up listening to music that has a bit of everything in them. You have '80s and '90s-inspired sounds used as samples, pop songs having rap elements, or even tracks that are a mishmash of multiple influences.

You're probably ready to wrap up your 2019 listening experience and start anew, but we say not just yet. In this list, we show appreciation for 15 of this year’s most outstanding albums (EPs not included). We’ve got everything from pop to psychedelic, folk to electronic, and international to OPM, so enjoy!

Here are the best albums released in 2019:

When We All Fall Asleep, Where Do We Go? by Billie Eilish

Release date: March 29, 2019
Listen to: “Bad Guy,” “All the Good Girls Go to Hell,” “Bury a Friend”
This year’s breakout music star Billie Eilish floored everyone with the release of her debut album, When We All Fall Asleep, Where Do We Go?, in March. In the rebellious 14-track album, the 17-year-old prodigy pushes the boundaries of pop music and unabashedly displays her avant-garde sensibilities, gothic leanings, and playful nature in every track. She croons, whispers, laughs, pleads, and flirts, while the music flows from snappy to fluid and back against a dark, brooding background. Hypnotic synths, stuttering beats, and thumping bass lines abound. Indeed, Eilish disrupts modern music with this art pop release and, inescapably, further raises our expectations.

Release date: August 30, 2019
Listen to: “Norman Fucking Rockwell,” “The Greatest,” “Fuck It I Love You”
Lana Del Rey’s musical depth and her sound’s grainy glamor (with all its glorious Americana) shine brightly in her latest album, Norman Fucking Rockwell! She’s not merely referencing the American author and artist here; she herself paints pictures of American culture and the human experience using her complex lyricism and haunting vocals. It’s never really simple with Del Rey; it always has to be a whirlwind of emotions. And the album experience is nothing short of delightfully psychedelic, heartbreaking, nostalgic, and thought-provoking all at once. Fans of her acclaimed 2014 album, Ultraviolence, may have found a new favorite.

Release date: August 9, 2019
Listen to: “Hey, Ma,” “Naeem,” “Holyfields”
Manipulated vocals and cryptic lyrics stand out in this folk-tronic record by Bon Iver. In i,i, Justin Vernon’s distinct falsetto stands front and center as it is enveloped by an atmospheric mix of sounds—all influenced by the music of the band’s past three albums. The vibe is both gentle and dynamic, down-to-earth yet reaching for the stars. To produce the contemplative i,i, Vernon collaborated with over 30 artists, including James Blake, Aaron and Bryce Dessner, Phil Cook, Moses Sumney, and Bruce Hornsby. It makes you wonder how they were able to delicately capture isolation and vulnerability in the album experience with such a large production.

Release date: May 12, 2019
Listen to: “Pagtingin,” “Araw-Araw,” “Sampaguita”
Everybody’s favorite local folk-pop act made our summer a whole lot better when they released their much-awaited debut album, Limasawa Street. Inspired by the concept of light and hope, the nine-piece band doesn’t hold back on the emotions and the grandeur. The instrumentation is as lush as you’d expect, and the vocals unsurprisingly wow in every song. They described the album’s sound as “folk, earthy, and organic,” but it also experiments with jazz, soul, rock, and indigenous stylings to offer something fresh.

Cuz I Love You by Lizzo

Release date: April 19, 2019
Listen to: "Juice,” “Cuz I Love You,” “Soulmate”
This year also blessed us with the über soulful and highly entertaining Cuz I Love You by self-love queen Lizzo. The multi-talented musician wastes no time impressing listeners with her smashing sophomore album. Teeming with emotion, confidence, and powerful vocals, Lizzo makes her presence known to all. The tracks here are unapologetic, some danceable, and many delightful. But all of them pretty much say the same thing—learn to love yourself first. Here, she also pays homage to her music heroes, evident in the obvious touches of Prince and Aretha Franklin.

Release date: November 8, 2019
Listen to: “Mary Magdalene,” “Holy Terrain” feat. Future, “Sad Day”
Tahliah Barnett, aka FKA twigs, delivers something heavenly in the form of Magdalene. The singer and dancer’s second LP screams futuristic experimental music perfection, thanks to its combo of wind chimes, trippy beats, distortions, chants, and even whimpers. The highly emotive album, named after one of the New Testament’s most controversial figures, was written after a very public split with actor Robert Pattinson and while going through some medical issues. All that pain, it seems, were channeled to the creation of this triumphant record that speaks to all women who have been scorned and misjudged.

thank u, next by Ariana Grande

Release date: February 8, 2019
Listen to: “Thank U, Next,” “Break Up With Your Girlfriend, I'm Bored,” “Bad Idea”
A quick follow-up to 2018’s Sweetener, Thank U, Next shows pint-sized pop diva Ariana Grande rising above and moving on in style. It’s a rich collection of pop gems sprinkled with electro, R&B, and hip-hop elements—all produced and polished in record time after a series of unfortunate events (the Manchester bombing, Mac Miller’s death, plus a highly scrutinized engagement and eventual split). Here, Grande cements her status not just as a pop star, but as a formidable woman.

Release date: July 21, 2019
Listen to: “Sigurado,” “Tambalan,” “Crying Season”
UDD, also known as Up Dharma Down, is dear to many Filipinos, what with their propensity for sharing our deepest, realest heartaches and turning them into musical gold. They’ve been with us through many ups and downs (ugly cries included), and earlier this year, with the release of their fourth studio album, they reminded us that they’re here to stay. The 11-track U D D is a strong compilation of poignant numbers and groovy tunes. The alt-pop masterpiece blends various elements like disco and jazz, dazzles with a good amount of danceable synths, and hits a home run with Armi Millare’s killer vocals.

Release date: May 17, 2019
Listen to: “Party for One,” “Happy Not Knowing,” “Want You in My Room”
It's tough to pick a favorite from Canadian pop star Carly Rae Jepsen’s Dedicated. In it, the songwriting machine and patron saint of broken hearts delivers shiny pop ditties that speak to us in more ways than one. Her winning '80s-inspired synth-pop formula hasn’t lost its touch, and the tracks will make you sing, dance, laugh, and cry all at the same time. Unlike her earlier albums, this one’s theme is a little more hopeful and a little less dreary, with songs that are playful and confidently flirty.

Release date: August 23, 2019
Listen to: “Lover,” “Death by a Thousand Cuts,” “Soon You'll Get Better” feat. Dixie Chicks
There's so much sincerity in Lover that you just can’t help but love it and develop some serious appreciation for Taylor Swift. It seems she's done dissing exes, or perhaps just too in love to care. In her seventh album, Swift achieves a cool balance between slow ballads and upbeat songs, plus offers an overall dreamy picture. She's no longer keeping quiet, either. Often criticized for keeping mum about today’s pressing issues, Swift is saying, through this album, that she’s not afraid to take a stand.

Father of the Bride by Vampire Weekend

Release date: May 3, 2019
Listen to: “Harmony Hall,” “Hold You Now” feat. Danielle Haim, “Unbearably White”
The guys of American indie-rock band Vampire Weekend must be feeling more relaxed about life in general these days. Their first album in six years, the 18-track Father of the Bride, is a refreshingly sunny offering showing an impressive quiet confidence. There's an eclectic medley of sounds and vibes here, including country, folk, jazz, California surf, and a bit of rock. Chock-full of new music, as if the band’s somewhat making up for lost time, Father is better appreciated for its individual tracks rather than overall cohesion.

Release date: June 1, 2019
Listen to: “Sheriff,” “Vault,” “Rift”
It's a shame Fools and Foes has gone on an indefinite hiatus not long after launching their eponymous debut album. Fools and Foes is a strong and well-received first effort that seamlessly combines math rock and indie folk sensibilities. The enjoyable melodies, soothing guitars, masterful drums, spot-on rhythm breaks, and endearing vocal harmonies will satisfy you. It’s an overall enchanting record with an air of mystery and darkness about it. It feels deeply personal, too, and perhaps you’ll find something here to relate to.

Release date: June 27, 2019
Listen to: “Runwayaway,” “I Am a Very Rude Person,” “Dawn Chorus”
Radiohead frontman Thom Yorke has created something dystopian for his latest solo project. ANIMA, his third solo studio album, is a dark yet mesmerizing compilation of futuristic sounds and various electronic experimentations. It artfully combines warped vocals, atmospheric synths, and pulsating percussions, and takes you across different dimensions that resemble everything from trippy dreams to paralyzing nightmares. It’s unnerving yet tender, complex yet enjoyable. You really can’t go wrong with a genius like Yorke.

Release date: January 18, 2019
Listen to: “Barefoot in the Park,” “Into the Red,” “Where’s the Catch?” feat. André 3000
James Blake’s fourth album, Assume Form, is noticeably clearer, sharper, and less depressing than his last. It’s ultimately symbolic of a transformation. Nonetheless, some things remain; the whole production, true to his style, is like a grand confession and an invitation into his soul. Dive deep into the exquisite arrangements and Blake's quivering vocals in this electro-soul-R&B blend. Here, he also collaborates with Travis Scott and André 3000 to take his sound to a whole ‘nother direction.

CLAPCLAPCLAP! by IV of Spades

Release date: January 18, 2019
Listen to: “Bata, Dahan-Dahan!,” “Take That Man,” “Come Inside of My Heart”
IV of Spades has had an eventful past couple of years—from acquiring viral fame, parting ways with their first frontman, another member being entangled in an alleged cheating scandal, and then eventually releasing a debut album. CLAPCLAPCLAP! is a statement that they’re not backing down, though. Filled with rock, funk, disco, and flair, the album lives up to the stylish and flamboyant image they’ve made for themselves. A little rough around the edges, no doubt, the record leaves much room for maturity. It may not be the most mind-blowing piece of work, but it’s simply entertaining, intriguing in its honesty, and a good effort for a band in flux.

Taylor Swift Songs Albums Yearender Udd Ariana Grande Vampire Weekend Iv Of Spades
Your Guide to Thriving in This Strange New World
Staying
In? What to watch, what to eat, and where to shop from home
OR
Heading
Out? What you need to know to stay safe when heading out