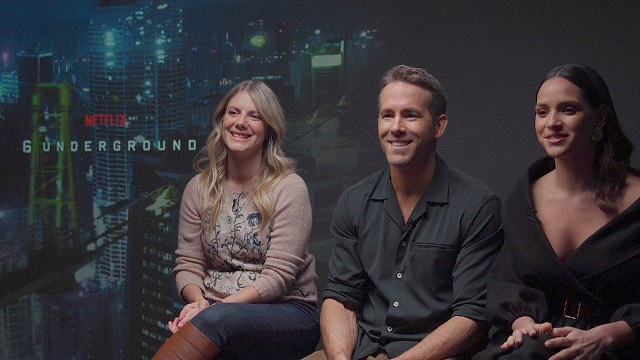 (SPOT.ph) There’s a bit of mystery surrounding Netflix’s newest action thriller, 6 Underground, which streams today, December 13. For starters, the characters in this Michael Bay film all go by numbers for their names. The leader of the gang, One (Ryan Reynolds), is a billionaire who decides to take matters into his hands and recruits like-minded people to join him in his plan to change the world, bringing down one baddie at a time. There’s Two (Mélanie Laurent), a former CIA operative; Manuel Garcia-Rulfo as hitman Three; and the death-defying parkour master played by Ben Hardy. Rounding up the group is Adria Arjona’s Five, who plays a doctor; Six (Dave Franco), the expert driver; and Seven (Corey Hawkins), the sharp-shooter.

The genius thing about this whole saving-the-world business? They’ve all faked their deaths, so they could do whatever they want anonymously.

Hours before their press conference, we caught up with Reynolds, Laurent, and Arjona in Seoul and had a chat about 6 Underground, their characters’ names, and more.

“It’s an action-packed Michael Bay hurricane of excitement and joy and insanity,” Reynolds says about the movie, which is similar to what he declared in a tweet months before on how 6 Underground is the most Michael Bay movie there is. We press him some more on what he meant by that, but he volleys the question back to us, pondering, “Why is it the most Michael Bay movie since Michael Bay was eased out of the womb into this world...bubblegum and broken glass?” he deadpans in the, well, most Ryan Reynolds way we could think of.

Reynolds turns serious and goes into how this movie is a return to Bay’s roots. “It's just sort of that return to that massive, spectacle-driven muscular action film, which is, you know, something that you don't see too much of these days,” he explains. “And I think it was really great that Netflix took a risk to bring this kind of spectacle into everybody's home.”

The characters’ numerical naming convention is also a curious bit, to which Arjona jokingly turns to Reynolds, a.k.a One, saying, “Well, you put that rule, don’t you? One puts that rule!” She then explains that it’s a way to hide themselves from who they used to be. “We all are just ghosts, and we fake our own deaths and we eliminate ourselves from society, to be free.”

Incidentally, one of the most memorable lines from 6 Underground goes, "The best part of being dead is the freedom." Reynolds quips, “Yeah, I have three kids. I love a good sleep in, but not that badly,” which makes Laurent crack up.

The characters in 6 Underground are presented with an opportunity to restart their lives without being tied to an identity, which in some ways sounds all too appealing. How could you not be tempted to carve out a fresh start for yourself? Adria, though, would pass on the chance, pondering how mistakes are part of every person’s life. “I think it makes you who you are today. So I wouldn’t try to start over.”

For Reynolds, a person’s identity is a “patchwork quilt” of triumphs, failures, and disasters, along with the most beautiful moments in life, and believes that without all those things, "you wouldn’t be where you are.”

Watch the rest of the interview here:

6 Underground is now streaming on Netflix.