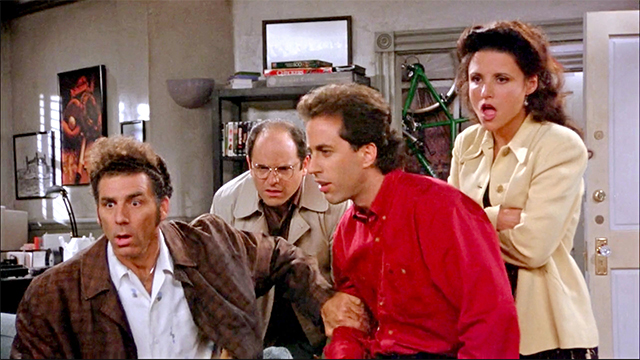 10 '90s Sitcoms You Can Stream for a Fun Flashback

Ready for a dose of nostalgia?

(SPOT.ph) It's a fact of life: sitting back with an episode (or five) of a good sitcom is always an excellent way to shake the day off. It's right up there with getting a rush of endorphins through a good home workout, playing online games with friends, or even checking out museums all over the world from the comfort of your own home. The '90s had several oldies-but-goodies, and here are some of the best ones you can watch right now.

Also read:
10 Pinoy Shows We All Watched in the '90s
10 Great Friendships From Sitcoms

Stream these '90s sitcoms for a fun look back at the decade:

Psychiatrist Frasier Crane leaves Boston (a.k.a. the set of Cheers) and returns to Seattle, his hometown, to get a fresh start in life. He shares his wisdom and gives advice on his radio talk show, and while he helps people get their life together, he also has his own issues with his retired father, younger brother Niles, and producer Roz. Semi-functional family relationships and witty barbs that make you think? Yes, please.

Actor Will Smith plays a fictionalized version of himself named, well, Will Smith in this sitcom. The street-smart Will moves into his uncle Phil (James Avery) and aunt Vivian Banks’ (Janet Hubert-Whitten) posh Bel Air mansion after he gets involved in a brawl in West Philadelphia. Take the upper class Banks family—which includes his cousins Hilary (Karyn Parsons), Carlton (Alfonso Ribeiro), and Ashley (Tatyana M. Ali)—and add the working class Will to the mix and you end up with a pretty fun take on the differences between the haves and the have-nots. Fun fact: The title comes from Smith’s rapper name The Fresh Prince.

Sometimes, you just want a funny and relatable show without the seriousness and structure of a plot. Seinfeld is a sitcom that’s about nothing and everything all at once, with episodes centering around the mediocre events of daily life injected with the comedy of stand-up comic Jerry Seinfeld (played by Jerry Seinfeld, natch).

Your family’s got its own problems and odd arrangements, and Full House features a family dynamic that’s just as unique. Sports anchor and widowed father Danny Tanner (Bob Saget) asks brother-in-law Jesse Katsopolis (John Stamos) and best friend Joey Gladstone (Dave Coulier) for help with raising daughters D.J. (Candace Cameron), Stephanie (Jodie Sweetin), and Michelle (Mary-Kate and Ashley Olsen). Though the show was not popular among critics during its first season, it still went on to become one of the most beloved shows in sitcom history.

High school student Kenan Rockmore (Kenan Thompson) is fond of brewing plans that’ll get him rich quickly or help him weasel his way out of trouble with his family, but his schemes often fail due to the carefree nature of best friend Kel Kimble (Kel Mitchell). The Nickelodeon show is known for breaking the fourth wall and having celebrity guest stars like Britney Spears.

You might have seen screencaps of The Nanny floating around the Internet for Fran Fine’s (Fran Drescher) stylish ensembles. It all starts when Fran knocks on Broadway producer and single father Maxwell Sheffield’s (Charles Shaughnessy) door to sell cosmetics, but finds herself becoming the nanny of the three Sheffield children (Nicholle Tom, Benjamin Salisbury, and Madeline Zima). Fran’s bright and chic outfits and butler Niles’ (Daniel Davis) sharp remarks add a refreshing zing to the show, making for a fun and enjoyable watch that will have you in stitches.

This list wouldn’t be complete without Rachel (Jennifer Aniston), Monica (Courteney Cox), Phoebe (Lisa Kudroz), Ross (David Schwimmer), Chandler (Matthew Perry), and Joey (Matt LeBlanc). Six friends come together at Central Perk in this celebrated show that explores the romantic escapades, career highs and lows, and generally just life in the Big Apple. All episode titles start with “The One With” or “The One Where” so it’ll be easy to remember certain moments and series highlights. The show was a hit from the '90s up to the '10s and it seems like it’ll still be a fave in the '20s.

Friends Frasier The Fresh Prince Of Bel-air Seinfeld Full House That 70s Show Kenan And Kel The Nanny Saved By The Bell Family Matters Streaming Services Netflix Amazon Prime Video Sitcoms Adventurer Savvy Seasoned Guide
Your Guide to Thriving in This Strange New World
Staying
In? What to watch, what to eat, and where to shop from home
OR
Heading
Out? What you need to know to stay safe when heading out