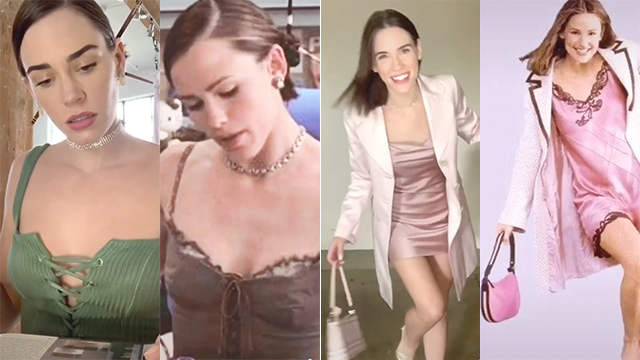 Her resemblance to Garner is uncanny!

(SPOT.ph) The 2000s gave us some of the most memorable rom-coms of our time with flicks like 50 First Dates, The Holiday, Hitch, Love Actually, How to Lose a Guy in 10 Days, and more. One film from that era that has aged beautifully and is still worth rewatch after rewatch is 2004's 13 Going on 30, which stars Jennifer Garner as Jenna Rink, a teenager who woke up as a 30-year-old with no memory of the majority of her life after her younger self wished wake up as an older version of herself. The actress who played Young Jenna, Christa Allen, was exactly 13 when the movie first premiered and it looks like she's still as nostalgic over it as we are because she recreated some of Garner's most famous outfits from the film in this cool video!

The video was posted on Allen's TikTok account on May 20. You'll see the now 28-year-old actress in several different outfits resembling Garner's looks in the film including her famous nightgown-and-trench coat ensemble, which is featured on the film's poster. The video will take you on a trip back in time and let you relive all your favorite scenes from the movie—especially considering Allen's undeniable resemblance to Garner. Fun fact: Allen also played a younger version of Garner on the 2009 film Ghosts of Girlfriend's Past.

Believe it or not, 13 Going on 30 celebrated its 16th anniversary this 2020 and the occasion was even commemorated by Garner's love interest in the film, Mark Ruffalo with a heartfelt Instagram post.

Allen also posted her own tribute to the film and reminisced over her experience shooting it in a 2019 Instagram post.

We guess we're not the only ones nostalgic over this early aughts classic! Now if only we could get Garner, Ruffalo, and the rest of the cast to recreate that memorable "Thriller" dance scene. In the meantime, we'll be rewatching the film nonstop and blasting Liz Phair's "Why Can't I?" on repeat all day long.

Christa Allen Jennifer Garner Mark Ruffalo 13 Going On 30 Romcoms Entertainment Savvy Adventurer Seasoned Tiktok
Your Guide to Thriving in This Strange New World
Staying
In? What to watch, what to eat, and where to shop from home
OR
Heading
Out? What you need to know to stay safe when heading out