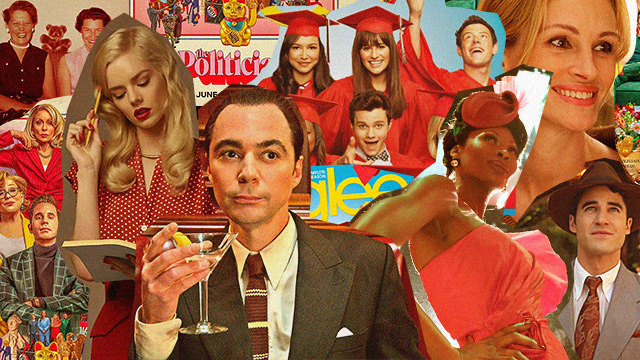 Glee, Hollywood + What Else to Watch for the Ryan Murphy Fan

Glee, AHS, and Scream Queens came from one guy!

(SPOT.ph) Quirky characters, ridiculous premises, and all-around cool stories. Ryan Murphy has made some of the most awesome shows and movies to hit the screens around us in recent years. Yup, the writer, producer, director—a creator, in general—has been, in one way or another, responsible for some of the most binge-watch worthy (and meme-quality) content. Not to mention his role in bringing queer characters and stories to the forefront of mainstream media. If you can’t get enough of his world, we round up 10 movies and shows from Ryan Murphy. Whether he wrote it, directed or produced, it’s bound to be a fun watch.

Add these fun movies and shows by Ryan Murphy to your list:

We’re starting off with a bit of an outlier. Based on the book of the same name, Eat, Pray, Love was directed by Murphy in 2010 and spawned the trend of soul-searching—or at the very least, those motivational posters you see everywhere. Julia Roberts stars as newly divorced Elizabeth Gilbert. From the outside, Gilbert looks like she has it all, but travels in Italy, India, and Indonesia allow her to dig deeper with herself and find what’s truly missing. It’s a feel-good movie perfect for a pick-me-up during bad times.

On arguably the opposite end of the spectrum is the American Horror Story (a.k.a. AHS). The horror anthology series has had audiences hooked for several years with its different storylines, from “Murder House” all the way to “1984.” AHS’ gruesome settings and fantastical stories may be otherworldly (and downright creepy at times), but audiences have always been able to connect to the stories and the multi-layered characters. Who can forget the many faces of Sarah Paulson in this show alone?

Scream Queens feels a lot like a parody of Mean Girls mixed with the Scream movies—so you know it’s going to be good. Chanel Oberlin (Emma Roberts) is the reigning queen of her sorority at Wallace University and is followed by a pack of Chanels, played by Billie Lourd, Abigail Breslin, and even Ariana Grande—whose character was one of the first victims of a serial killer dressed as the Red Devil mascot. This slasher satire hits all the right notes when it comes to being ridiculously entertaining.

Arguably the first of Murphy’s creations to reach cult-level status, Glee was a force in popular culture. It follows a group of kids in McKinley High School who become the glee club, banding together through adversity and all the complications of life—and most importantly, bursting into excellent song-and-dance numbers at any given moment. Glee aired for six years and tackled important issues such as race to sexuality while still balancing the heavy topics with near-ludicrous premises.

This critically acclaimed drama series features the underground ballroom culture of queer and trans people during the 80s and ‘90s in New York City. Though fictional, it draws heavily from Jennie Livingston’s 1990 documentary Paris Is Burning—a seminal work that brought the mostly-secret world out into the open. Pose follows several characters: Pray Tell (Billy Porter), Damon (Ryan Jamaal Swain), Angel (Indya Moore)—all coming from the fringes of society—as they make their own way through the chaotic world of New York, besieged by racism, homophobia, poverty, and the onset of the HIV outbreak. The first season was widely praised and made history after it was nominated for the Golden Globe Award for Best TV Series (the first show with a mostly trans cast to do so) and an acting nomination for Porter as well, the first one for an openly gay black man.

Once again proving his knack for fleshing out the nuances—and ridiculousness—of U.S. culture, Murphy served up this comedy drama in 2019. It follows the ambitious Payton Hobart (Ben Platt), a rich guy from Santa Barbara, California, as he makes his way up the political ladder with the ultimate goal to become President of the United States—except he’s still just in high school. The story revolves around a whole bunch of conniving characters, including Payton’s own mom, Georgina, as played by Gwyneth Paltrow.

This gorgeous mini-series is set in post-World War II Hollywood. Different folks from different lives have the same dream of making it in Tinseltown but they all must face the prejudices and unjust dynamics that plague the entertainment industry. It features Darren Criss as Raymond Ainsley, a half-Filipino who wants nothing more than to be a Hollywood film director.

With Murphy as producer and Chris Bolan directing, this hard-hitting documentary features the story of two women who kept their love a secret for decades. Terry Donahue was a professional baseball player who met Pat Henschel,  the love of her life,  in 1947. They spent the next seven decades parading as best friends, cousins, and whatever was necessary to be able to spend their lives together. The two are Bolan’s great aunts, and when they finally came out, he knew this was a story that needed to be heard.

While Murphy directed only one episode of the series, this in-depth retelling of one of the world’s most shocking murder cases is definitely worth a watch. It follows the story of Andrew Cunanan (played by Darren Criss in the series), the Filipino-American who went on a killing spree and murdered designer Gianni Versace on July 15, 1997. Murphy directed the “The Man Who Would Be Vogue” episode, which tackled the murder itself as well as the interactions between Versace and Cunanan years prior, setting up the entire series.

This is another period piece set in the glamorous Hollywood age of the ‘60s. The fictional drama is a retelling of the well-documented feud between superstars Joan Crawford and Bette Davis, played by the talented and famous Jessica Lange and Susan Sarandon,  respectively, during the making of the psychological comedy thriller Whatever Happened to Baby Jane? in 1962. The critically acclaimed series only had eight episodes but offered a fantastic look at old Hollywood through the story of two of its greatest stars.

Adventurer Savvy Seasoned Ryan Murphy Movies Shows Eat Pray Love Glee The Politician Scream Queens Pose Hollywood A Secret Love Assassination Of Gianni Versace Feud Bette And Joan Guide
Your Guide to Thriving in This Strange New World
Staying
In? What to watch, what to eat, and where to shop from home
OR
Heading
Out? What you need to know to stay safe when heading out