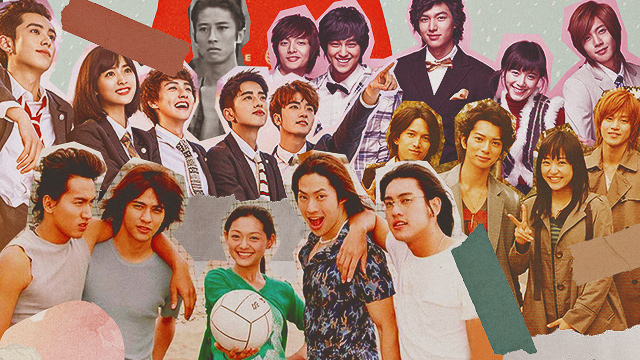 Every Version of F4 That Came to Our TVs, Ranked

Not all Dao Ming Sis were made equal.

(SPOT.ph) There are many things that never go out of style. For example: a little black dress, being kind to others, and well, the story of four popular-but-misguided boys who bully the new girl in school then somehow become entangled in a romantic tale with her. As evidenced by the many versions we’ve had—and joyfully consumed—Meteor Garden isn’t going away anytime soon.

Plus, there is a new Thai version arriving in 2021 so we thought this would be the perfect time to revisit all the previous iterations of the “Flower Four” boys—by ranking them. We’re taking into account the overall story, how much they made audiences believe in them (i.e. the “feels”), and their lasting impression.

This undying tale originated from a '90s Japanese manga series called Hana Yori Dango, which translates to “Boys Over Flowers.” It was written and illustrated by Yoko Kamio. The core story of a middle-class girl going to an elite school and clashing with a group of rich and popular boys, a.k.a. the “Flower Four” comes from here. The characters are the feisty Tsukushi Makino, while the OG F4 group are composed of leader Tsukasa Domyouji, the sensitive Rui Hanazawa, along with Akira Mimasaka, and Sojirou Nishikado.

Look, we know we have a hard task ahead of us so disclaimer, you can totally make your own list and release all your emotions down below. The F4 groups, of which there have been a lot of versions, have captured hearts all over the globe. For this ranked list, we’re taking into account only the official versions. Because yes, there are a few “inspired” series that might have slipped under the radar of even the biggest Hana Yori Dango fan.

There was a super clean-cut Chinese version in 2009 called Meteor Shower. MTV India aired a more youth-oriented series called Kaisi Yeh Yaariaan, though in this one the “F4” group was replaced by the FAB5, which yup, you guessed it, had five spoiled kids instead of four. In 2013, there was even an American web series called Boys Before Friends that was based on Hana Yori Dango—though we feel like the fan base would rather forget about this one altogether.

So, which version of Hana Yori Dango’s F4 was the best?

This old '90s film was arguably the first live-action adaptation of the manga. It was directed by Yasuyuki Kusuda and featured Yuki Uchida as Makino Tsukushi. And seeing as it was smackdab in the middle of the '90s, everything about the film is very much of the decade—in the best way possible. There’s Uchida’s epic boy cut, the very '90s—for lack of a better term—nightclub scenes and house parties, and leading bad boy Tsukasa Domyouji’s (Shosuke Tanihara) penchant for not wearing a shirt under vests and jackets. This movie’s lead actors, Uchida and Tanihara went on to become huge stars in Japan.

The movie was made when the manga series was still running so the story isn’t quite as fleshed out just yet, leaving behind most of the conflict that made future versions so arresting—which immediately takes off a whole lot of points. Plus, the movie revolves mostly around Tsukasa and Rui Hanazawa (Naohito Fukiji) and pretty much leaves the other two members of the F4 in the dark. It isn’t exactly the most impactful version around but it definitely makes for a fun watch when you’re in need of a throwback to the '90s.

The most recent version of Hana Yori Dango was in 2018. It was called Meteor Garden and was helmed by Angie Cai, the same showrunner behind the OG Taiwanese version from 2001. It followed a mostly similar storyline as well, this time with a new cast: Shan Cai (played by Chinese actress Shen Yue). Dao Ming Si (played by Dylan Wang), Hua Ze Lei (Darren Chen). And of course, the F4 gang isn't complete without Xi Men (Caesar Wu) and Mei Zuo (Connor Leong).

Sure, the 2018 version definitely had the advantage of better production technology and dare we say it, the benefit of more updated fashion, but this F4 group couldn’t quite hold a candle to previous versions. They definitely brought a more youthful, softer vibe to the characters and TBH, Wang gave Dao Ming Si a cooler, more boyish charm.

Japan came through with their own TV series for the manga in 2005. It starred Inoue Mao as Makino, with the F4 boys rounded out by Jun Matsumuto as Domyouji, Oguri Shun as Rui, Matsuda Shota as Sojiro, and Abe Tsuyoshi as Akira. This version has a more emotional Makino in the lead, as compared to the tough weed in the OG manga. Also, who can forget the first time we see Domyouji’s character with full-on curly hair?

This drama focused a lot on Makino and Domyouji’s tumultuous relationship. There were some swoon-worthy moments that definitely rivalled other versions, too. The popular series even had a follow-up season in 2007 called Hana Yori Dango Returns and a movie in 2008, Hana Yori Dango Final, which ended with what is probably the only wedding scene in a Meteor Garden remake ever.

And finally we have the South Korean version that had Pinoy audiences hooked in 2009—and probably gave us our first brush with Lee Min Ho, who played the F4 leader Gu Jun Pyo. In this one, Geum Jan Di (Hye Seon Ku) is the poor but strong-willed girl who goes up against F4, Gu Jun Pyo, Yun Ji Hu (Hyeon-jung Kim), So Lee Jeong (Kim Beom), and Song Woo Bin (Kim Jun).

The story followed much of the original storyline and the series became a popular hit across Asia. Jun Ki Sang, the show's producer, said that they specifically sought actors that looked almost exactly like the comic-book characters. It was arguably part of the initial wave of K-Dramas that became a hit with audiences outside of Korea—and we can’t help but feel like the F4 boys had something to do with that. Plus, this series cemented Lee Min Ho as the one to watch.

Alright, alright, you definitely saw this one coming—and there’s really no other way. The OG Taiwan production is arguably what started this whole obsession with the Hana Yori Dango storyline, and we’re sure you had posters of Shan Cai (Barbie Hsu) and the F4 boys—Dao Ming Si (Jerry Yan), Hua Ze Lei (Vic Zhou), Mei Zuo (Vanness Wu), and Xi Men (Ken Chu)—on all four walls of your childhood bedroom.

We can list down all the unforgettable moments from this TV series to prove just how lasting this TV drama is, or we could just point out the craze that eventually followed the OG F4 even after their show aired. The group eventually became a legitimate boy band that released three studio albums and even had a concert in the Philippines in 2003. They changed their name to JYKV following copyright issues in 2007. Plus, the name Jerry Yan could still cause a craze here in the Philippines—Filipino fans gushed over his topless photos in August, for one—a lasting impact that the upcoming Thai F4 is sure to find hard to beat. Anyone else still memorize the lyrics to "Jue Bu Neng Shi Qu Ni (Can't Lose You)," aside from "Oh baby baby, my baby baby?"

Adventurer Savvy F4 K-dramas Meteor Garden Jerry Yan Lee Min Ho Greener
Your Guide to Thriving in This Strange New World
Staying
In? What to watch, what to eat, and where to shop from home
OR
Heading
Out? What you need to know to stay safe when heading out