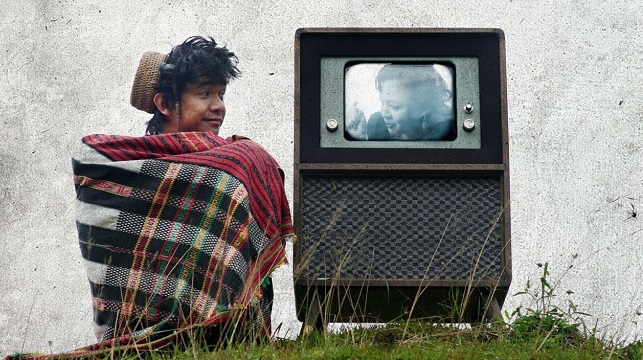 Here's where you can stream Tokwifi!

(SPOT.ph) Just when you think you've seen all the possible iterations of the boy-meets-girl story there is, a new one comes along. In Tokwifi, a Bontoc Igorot man meets and falls in love with an actress—only she's trapped inside an old television set.

This short indie work won "Best Film" at the 2020 Cinemalaya and if you weren't able to catch it then, well, no worries because it is set to be part of the Maginhawa Film Festival from November 11 to 22! With the physical micro-cinema of Cinema Centenario now closed, the festival will take place on their online platform, Moov.

The unusual love story revolves around Laura (Adrienne Vergara) and Limmayug (Kurt “Ayeo-eo” Lumbag Alalag). One is a 1950s mestiza star—who literally falls from the sky—and is trapped inside a TV, while the other is an Igorot "who does not know how to kiss," according to the movie's summary on the Cinemalaya website. Tokwifi was made closely with the people of Bontoc, Mt. Province, said director Carla Ocampo.

While the premise does sound rather hilarious—especially as the two try to make sense of each other—the film dives deep into the ways we tend to judge people based on stereotypes.

You can buy access to all competing films at the Maginhawa Festival for P160 on the Moov website. This is an early bird rate so be sure to get it before October 31! From that date on, tickets for an all-access pass will be P200 while access to either the Student Category or the Open Category will be P120 each.