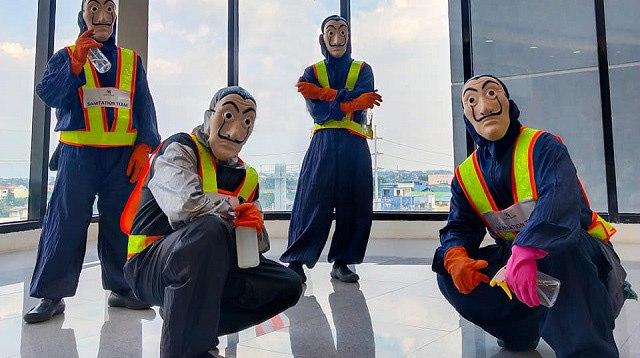 LOOK: The Money Heist "Thieves" Clean Up at This Local Mall

And no, this wasn't a part of some grand heist-we hope.

(SPOT.ph) It gets a little harder and harder to be shocked by strange things with every day of 2020 that passes. Manila Bay's waters turning a toxic-looking bright blue-green shade? Yeah, okay. White sand? Well, fine. PhilHealth? Disappointed, angry, but somehow, not that surprised. The Money Heist thieves popping up in a mall and sanitizing the place? Wait, what?

If you were at the Robinsons Galleria South mall in San Pedro, Laguna, anytime lately, you might have spotted their sanitation gang all geared up—complete with the immediately recognizable Salvador Dali masks the thieves in Money Heist used! The mall posted pictures of the gang to Facebook on October 29.

In case you're a little confused—after all, the thieves popping out from the fictional series and into real life doesn't seem too far-fetched anymore—these Money Heist "gang members" were in charge of cleaning up the mall in time for the Halloween events this weekend. We know it's meant to add to the spook factor, but TBH, it would have been great fun to spot the thieves randomly at a mall! Check out more pictures of them in action cleaning up—literally—below.

The Money Heist masks became popular when the craze over the series hit our shores via Netflix in 2017. Originally a Spanish production entitled La Casa de Papel, the masks they wore in their first grand heist became an immediately recognizable symbol.

The show became so popular locally, a character in the latest season was named Manila. Frontliners in Iloilo also wore Money Heist-inspired protective suits while on duty at the Internal Medicine Department of Western Visayas Medical Center in the summer months. So while the original masks were used for something sinister, us Pinoys have used it to give others a much needed bright spot.