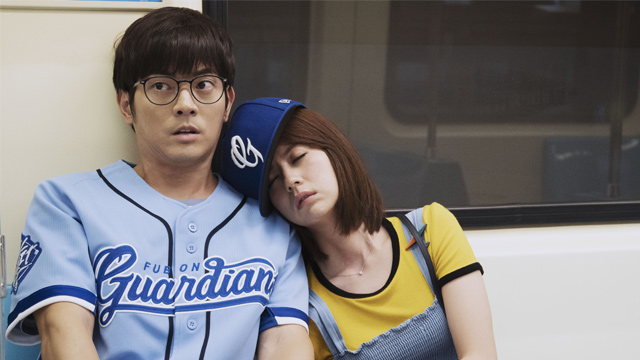 In This New Taiwanese Romance Series, We Take a Look at Love Beyond Popping the Question

Adventure of the Ring premieres December 13.

(SPOT.ph) Marriage is the next natural step for most couples in a loving, long-term relationship. But asking someone's hand for marriage is no walk in the park; adding to the pressure that already comes with the decision itself is how proposals have turned into crazy, grandiose events in recent years. We’ve seen so many ways people have asked “Will you marry me?” from the simple to the extravagant, you'd think it's already the couple's wedding day. In the case of this new HBO series entitled Adventure of the Ring, we see how even the best-made plans could fall apart—and what love truly means for couples.

The show stars right off the bat with an engagement story gone wrong for couple Yi-Zhi (Chris Wang), an actuary with a love of baseball, and Lisa (Allison Lin), his girlfriend who works as a flight attendant. As the title of the show implies, the ring goes off on an “adventure” of sorts: Yi-Zhi’s meticulous planning for his marriage proposal to Lisa goes awry when he misplaces the engagement ring. From that point, the ring travels through the hands of other couples and impacts many lives.

There’s “a lot of realness, a lot of truthfulness” that viewers could get from the show, says Janet Hsieh, who plays Rossy in the series. In a roundtable interview with the press, she shares how she finds the show. “You can imagine it easily as yourself or you imagine it with somebody else that you know personally, or maybe even your parents,” she says. “The relationships are just, they're not that romanticized… you don't fall in love with this extremely handsome alien from space, or you know, or or a billionaire, that type of thing; I would say they're [the stories are] very close to reality.”

More than Yi-Zhi and Lisa’s relationship, the series also showcases the “many different types of relationships” that aren’t just centered on romance, but also friendship, kinship, and self-love. Hsieh explains, “That's kind of something that you don't really see a lot in relation to Taiwanese dramas or just dramas in general. Normally, everything's wrapped up beautifully, everything works out in the end, you know. Yay!”

Perhaps the show is even more close to home for Hsieh, who almost lost jewelry for an important event; in her case, when she was about to get married in Antarctica. She recalls that her friend was going to bring a diamond necklace that was on loan to Hsieh, from Taiwan straight to Antarctica. While Hsieh was still filiming in Argentina, said friend calls her up in the middle of the night to say that the necklace was missing. To cut to the chase, the jeweler lent Hsieh another piece (“they were very calm,” says Hsieh)—and she got wed to George Young. A few days later, her friend’s mom was able to get through with a call when they were got back in Argentina (“by the way we're in Antarctica so there's no communication, unless it's by satellite so just basically it's just 10 days of silence,” Hsieh recalls) to tell them that the box was found. “Somehow it slipped underneath the driver's seat," she recounts. “I guess I kind of had my Adventure of the Ring moment, just mine was a necklace and a wedding ring. And it was in Antarctica, or it was on the way to Antarctica,” she says with a laugh.

Adventure of the Ring starts streaming on HBO GO on December 13, 9 p.m.

ADVERTISEMENT - CONTINUE READING BELOW
You'll Also Want to Read These
Hot Stories You Might Have Missed
Your guide to thriving in
this strange new world.

Hbo Go Streaming Services Adventure Of The Ring Series Janet Hsieh Adventurer Savvy Taiwanese Taiwanese Drama Series Staying In
Your Guide to Thriving in This Strange New World
Staying
In? What to watch, what to eat, and where to shop from home
OR
Heading
Out? What you need to know to stay safe when heading out