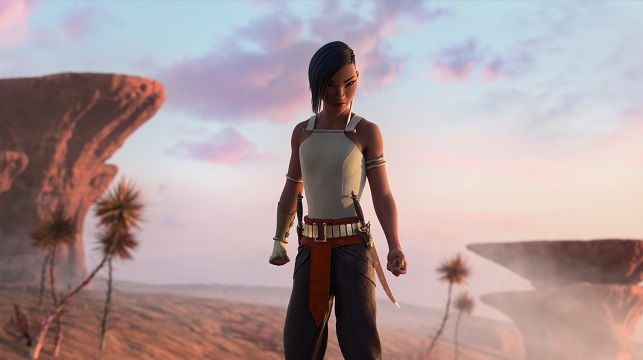 Disney's Raya Has A New Nemesis And It's Gemma Chan

Yup, as in Astrid "I have 14 apartment buildings" Leong from Crazy Rich Asians.

(SPOT.ph) Disney has dropped another trailer for Raya and the Last Dragon—the animation powerhouse's first ever movie based on Southeast Asian culture—revealing our first look at the entire band of characters on this epic adventure film! There's Raya (voiced by Kelly Marie Tran) and her trusty steed-slash-best friend Tuktuk (voiced by the very talented human Alan Tudyk), a "con baby" of sorts, a very young boat captain, a huge warrior, and, whoa, who is this badass-looking villain? Yup, it looks like Raya has more than just supernatural evil to battle. Take a look at Namaari below:

An epic battle between two female Southeast Asian warriors? Heck yeah. We may not have spotted Raya's eskrima sticks here but that extendable sword leaves no complaints here. Plus, Disney has finally revealed that Gemma Chan will be voicing Raya's nemesis, Namaari, in the film. Namaari is the daughter of the powerful Virana (Sandra Oh), chief of Kamandru's forbidable Fang lands. This technically places the two characters as both "princesses" of sorts, only they belong on warring sides.

In an ET Online interview with Raya and the Last Dragon directors Don Hall and Carlos López Estrada, the latter mentioned that they didn't want Namaari "to be a villain" and that Chan took that "really seriously." "She's an antagonist because she's opposing our protagonist, but she has good logical reasoning for wanting to stand for the people of her land."

Chan first brought Asian representation to global screens as the incredibly sophisticated Astrid Leong-Teo in Crazy Rich Asians. That scene where she says "It’s not my job to make you feel like a man. I can’t make you something you’re not" still gives us chills, TBH, so you best believe we can't wait to see what power she brings as a Disney villain.

Joining the cool cast is Daniel Dae Kim as Raya's father, Benja; Benedict Wong as Tong, the big scary warrior, Izaac Wang as the business savvy 10-year-old boat captain, Thalia Tran as the "con baby," and of course, Awkwafina as Sisu the last dragon. The movie is set to screen in Philippine theaters sometime in March. Don't forget to mark your calendars!

Adventurer Savvy Gemma Chan Disney Raya
Your Guide to Thriving in This Strange New World
Staying
In? What to watch, what to eat, and where to shop from home
OR
Heading
Out? What you need to know to stay safe when heading out