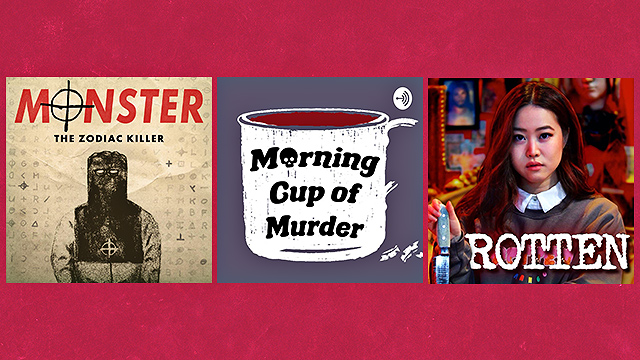 (SPOT.ph) True-crime stories have everyone addicted. We don’t know why people love digging deep into all the horrible things humans are capable of—but that’s another topic. If you’ve finished all the documentaries on streaming platforms and on YouTube channels, it is about time you give podcasts a try. We round up some of the craziest ones below, from the super serious investigative kinds to more lighthearted takes to cut down on the morbidity.

Also read:
Obsessed With Cecil Hotel? Here's Why You Should Stream Night Stalker Next
10 Addictive YouTube Channels About True Crime That Will Keep You Up at Night
10 Thrilling True-Crime Documentaries You Can Stream on Netflix

Crank up the heebie-jeebies with these 10 true-crime podcasts:

Why it's great: Stories After Dark is arguably one of the most popular Pinoy true-crime podcasts out there. The podcasts have a super serious yet slightly campy vibe to them, complete with creepy narration and sound effects, to match the campfire stories push of the title.

Cases: Of the bizarre, unexplained type.

Why it's great: There are some crimes that just can’t seem to be explained logically—which is where the supernatural part comes in. Flowers dives deep into these strange cases so if you’re into crimes that may have delved into the otherworlds, this one’s for you.

Narrator: Matt Frederick of Stuff They Don’t Want You to Know

Case: A 15-episode, 40 to 45 minute-each, deep dive into the still unresolved case of the Zodiac Killer.

Why it's great: The case of the serial killer dubbed Zodiac Killer is arguably one of the most popular unresolved true-crime cases, fueled by the perpetrator’s own strange desire for publicity and all those still undeciphered letters sent to police. If you want every little bit of detail, every possible angle covered—and more—then this incredibly deep dive is for you.

Cases: All kinds of true-crime cases and strange happenings from the U.S. to Japan

Why it's great: You might know Stephanie Soo from her YouTube channel where she mukbangs while discussing truly gory crimes, mostly serial killers. Well, she puts on her podcast the cases that are too gruesome to eat to. Soo somehow combines her very well-researched narrations into despicable deeds nicely with her ultra-bubbly personality, making this one of the best ways to get your true-crime dose minus the serious creepy after-feelings.

Narrator: A Filipino-German by the name of Christine

Cases: Popular and lesser known true-crime cases from the Philippines

Why it's great: Christine’s episodes average around 40 minutes each and allow a deeper look into cases that are already quite well-known, as well as a few that may have gone under your radar. Plus, an hour or so discussion with Esdi San Diego, the grandson of Judge Lourdes Paredes San Diego who presided over the trial of Maggie De La Riva, an actress who was abducted and raped by four influential men in 1967.

And That’s Why We Drink

Hosts: Christine Schiefer and Em Schulz—plus boxed wine, according to their poster.

Cases: True-crime cases with a touch of the paranormal.

Why it's great: This podcast covers the same type of cases as Ashley Flowers, but in a looser, more fun, but no less in-depth way. If you want to feel like you’re simply chatting with friends about ghosts and murder over a few drinks, than this is the podcast to check out.

Cases: The brutal 1993 murders of Eileen Sarmenta and Allan Gomez and the Maguindanao Massacre

Why it's great: PumaPodcast and Inquirer partner to tackle an investigative look into the two most controversial crimes in recent Philipine history. The first season, “Hatched in Hell,” goes through several episodes worth of information into the crimes of Antonio Sanchez, the mayor behind the deaths of the two University of the Philippines - Los Baños students, Sarmenta and Gomez, while the second season, "A Beautiful Place to Die,” tackles the country’s best-slash-worst example of impunity and lack of press freedom, the horrid Maguindanao Massacre.

Cases: All kinds of crimes from the West.

Why it's great: If you want the whole story based entirely on facts and some intense investigative journalism, Thompson has what you need. The author unravels the details of gruesome crimes using 911 calls, interviews, and even trial testimonies to really complete the case.

Cases: Unsolved disappearances of people around the world—of which there are way more cases than we expected.

Why it's great: The two hosts, high on energy and lots of laughter, play commentary to episodes from true-crime TV series Disappeared. In between audio from the show documenting creepifying cases of people vanishing into thin air are hilarious discussions between Hinds and Marsh. Definitely for lovers of the irreverent.

Cases: As the title says, it’s all about murder on this podcast.

Why it's great: You know what’s a better pick-me-up than coffee in the morning? A quick, 10-minute run through of a brutal murder case—and that’s exactly what this podcast offers.

Adventurer Savvy Seasoned Spotify Streaming Services Guide Greener Super Evil Podcasts Stories After Dark Lagim: A Filipino True Crime Podcast Rotten Mango Supernatural With Ashley Flowers Monster: The Zodiac Killer And That's Why We Drink Morning Cup Of Murder Obsessed With: Disappeared Staying In
Your Guide to Thriving in This Strange New World
Staying
In? What to watch, what to eat, and where to shop from home
OR
Heading
Out? What you need to know to stay safe when heading out