How Park Shin Hye Did Badass Stunts In Sisyphus The Myth
Loading
Already a member? Log in
No account yet? Create Account
Spot.ph is your one-stop urban lifestyle guide to the best of Manila. 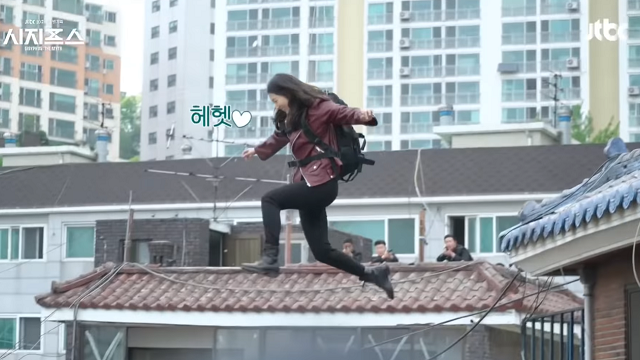 Looks like "stunt double" is not part of her vocab.

(SPOT.ph) Park Shin Hye is known for her badass roles. But her character Kang Seo Hae in the new Netflix K-Drama Sisyphus? Even more so. The new sci-fi action series currently has everyone hooked on the streaming platform and in case you were wondering how they pulled off that blood-pumping chase scene on rooftops, then worry not because JTBC Drama has released a fun behind-the-scenes video! Beware of spoilers if you haven't tuned in.

The video shows the two actors rehearsing pretty pivotal scenes between their characters. Park plays Kang Seo Hae, a BTS-loving elite warrior from the future sent to protect Han Tae Sul (Cho Seung Woo)—who, in turn, is a genius engineer troubled by the death of his brother. Chae Jong Hyup plays Sun, a Chinese restaurant employee who crosses paths with the warrior.

They first shoot a confrontation between the two—with Park even comforting Chae when he forgets his lines. We totally get it! Then on to the real deal: that chase scene on rooftops.

Park and Chae rehearse running up and down fire escapes, through rooftops, and yup, jumping off a building, all while baddies are chasing them. You can really see how it took an entire team to shoot the high-stakes sequence! Plus, take a peek at how Park and the rest of the actors manage to fake punches and kicks that look like they totally landed. And yup, at one point Park goes from badass warrior to apologizing to one of the villains particularly gnarly-looking fight scene where she kicks him.

And here's the movie magic secret for those epic jumps. The two also take turns hanging around—literally—as they jump from rooftop to rooftop on harnesses to get away from the bad guys! Chae even takes on falling flat on his face, on purpose. And when the shoot is over, the two are back to being friends, with Chae helping out to help with the cables attached to Park. Check out the video below:

Adventurer Savvy K-drama Netflix Streaming Services Park Shin Hye Staying In
Your Guide to Thriving in This Strange New World
Staying
In? What to watch, what to eat, and where to shop from home
OR
Heading
Out? What you need to know to stay safe when heading out