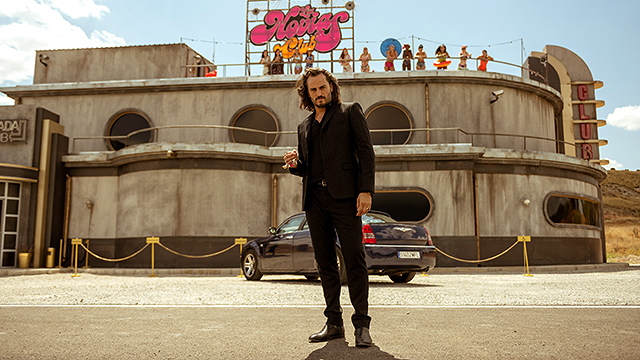 The Creators of Money Heist Are Back With Sex, Drugs, and Badass Women

Think of it as a really good B movie but with substance.

(SPOT.ph) Do you wait for the day the good and the bad finally get their due? The time divine judgement, karmic justice, righteous retribution, what-have-you, finally arrives in the most poetic—and entertaining—way possible? There is something so satisfying about seeing somebody work hard and finally get what they deserve; whether it is punishment or reward usually depends on the kind of show you’re watching. And the latest from Money Heist creators Álex Pina and Esther Martínez Lobato is certainly going to keep you guessing what happens next, and more importantly, how it will all end.

Sky Rojo is the biggest Netflix project from Spain this year (so far!). And yup, it delivers the same kind of heart-racing action that made La Casa de Papel so gripping, but this new series may be even more hardcore. “An episode or a movie has a third act in which all the energy comes together. It’s the most vibrant explosion of the conflicts being narrated,” said Pina and Lobato in the production’s notes to the press. “Why not work with a constant third act and funnel our entire story through that frenetic energy?” It was with that idea of “frenetic energy” that the story of Sky Rojo was built so you can expect your heart rate to be up the entire time.

Also read:
The Cast of Money Heist Spills What to Look Forward to in Part 4
Money Heist's New Gang Member Manila Is a Tribute to Filipino Fans

Keeping Entertainment and Reality in Balance

At the center of Sky Rojo are three women: Coral (Verónica Sánchez), Wendy (Lali Espósito), and Gina (Yany Prado). The three are prostitutes working—on different levels of willingness—at the Las Novias Club owned by their pimp, Romeo (Asier Etxeandia). When something goes wrong, they escape the club and embark on a crazy journey for their own survival, all while being chased not just by Romeo’s men but by their own pasts. The thing is, though the stories of Coral, Wendy, and Gina may be fictional in Sky Rojo, their experiences are far from being something that happens solely onscreen.

“We wanted to make a show with the sensibility and tone of pulp, crass and confident, with references to B movies from the '60s, with their brashness and action, with cars, guns, girls, the desert,” noted Jesus Colmenar, Sky Rojo director. “At the same time, we didn’t want to lose sight of the characters’ emotional truths, which allow a deeper look into the show’s conflicts of prostitution and human trafficking.”

Pina and Lobato drew a lot of Sky Rojo from real life, “a deep well of stories and reflections that we have collected through research and interviews with sex workers and victims of sexual exploitation throughout Spain,” they said. Still, Sky Rojo veers away from the usual way these truths are told. So we know it’s a crazy ride, judging by Colmenar’s description, but it’s more than that.

“Making an action title with mainstream elements like chases, fights and thrills which also hides a psychological undercurrent and social commitment is quite risky,” admitted Pina. That underlying factor is not the main focus of the show, sure, but it is an undeniable base that they hope still manages to shake the viewers' worldview somehow. The move was one heck of a risk, added the creator, because that balance is “a tone that’s impossible to sustain. A total tightrope walk. If you fall to one side, it’s completely vacuous. If you fall to the other, you lose the entertainment value.”

“A TV show always trivializes reality to some extent, but when the reality is very sensitive, the danger of trivializing it is that much greater,” said Lobato, adding that Sky Rojo is “the riskiest show” they’ve done.

Switching Things Up From Money Heist

The biggest change the creators had to adjust to was the shift from episodes that go for an hour or so to ones that last only 25 minutes. “We’ve learned to compress the story without compromising on the cinematic aspects or the fast-paced content,” said Lobato. The shorter format makes things much more exciting for the viewer, of course, but all that much harder for the creators.

And as for the show’s themes: “If Money Heist was about people locking themselves inside, it’s the exact opposite in Sky Rojo, which is the story of an escape,” said Miguel Amoedo, director of photography. “We wanted to create a moment of total freedom with the characters and the aesthetics.” You might remember the simpler palette of Money Heist—with that occasional pop of red—well, don’t expect that in the ultra-colorful, almost comics-like world of Sky Rojo.

Who to Watch For in Netflix Show Sky Rojo

The intelligent Coral is the main focus of Sky Rojo. She came to the club of her own accord thinking it would help her past—but somehow finds herself the leader of the trio on the run. Sanchez tells SPOT.ph about the difficulty of balancing out Coral’s polarities as “a character that had truth, that was intelligent and rational but, at the same time, could not bear her life and was addicted, dramatic, but would never fall into darkness.”

Coral as the lead character had to be that perfect symbol of Sky Rojo’s two main factors; she “had to be anchored in an absolute emotional truth but, at the same time, move and act in an unreal environment, with a pulp aesthetic and narrative pulse.” Sanchez admits that the role was “one of the most difficult and satisfying jobs I have ever done.”

Wendy is more of the wild-card member of the trio. Esposito, an Argentine, looked to her own childhood when shaping what Wendy would be like. Her character enters the club willingly but only as a last resort to achieve her dreams of escaping poverty. To say that each of these women and all the characters are complicated is an understatement. “We all are a bit of everything. I think that no one is neither very tough nor very smooth,” explains Esposito. “Wendy had a life that made her build a big shield to protect her from pain, but she is a woman with dreams, sensitive and energetic.”

Gina rounds out their gang. Played by Cuban actress Prado, her character’s story is the tragic tale we like to associate with headlines and news articles: a young girl recruited to sex work on the pretext that she would be working as a waitress.

In Sky Rojo, it is these three we follow through a surreal landscape in an almost-absurd storyline. There’s everything from blood, gore, sex, and truckloads of dark humor to keep us entertained, backed by the “truths” the creators and actors built Sky Rojo on. “I think that entertainment is a powerful vehicle for telling this story,” added Lobato in the notes.

“We’ve all heard people speak out against prostitution, but when you hear the other side, the impact on your awareness is much more jarring. When you hear the pimp speaking positively about his business with total impunity, that’s when the audience really gets a shock.” And with only 25 minutes per episode and nothing but their lives to lose, it’s hard to not be caught in the story of Carol, Wendy, and Gina.

Adventurer Savvy Money Heist Sky Rojo Netflix Streaming Services Greener Staying In
Your Guide to Thriving in This Strange New World
Staying
In? What to watch, what to eat, and where to shop from home
OR
Heading
Out? What you need to know to stay safe when heading out