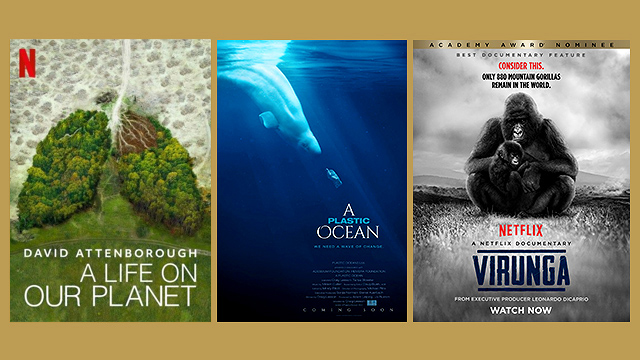 10 Nature Documentaries to Watch, Ranked by How Much We're F*cked

But we can still do something.

(SPOT.ph) As if we didn’t have enough on our plates in the middle of a global pandemic, the climate crisis is still very much a thing we’re dealing with as a planet. Seasons and weather conditions are erratic, plastic pollution is taking over our oceans, and more and more wildlife species are getting listed as endangered. A number of documentaries you can stream reveals a lot of what’s really happening around us—and just how f*cked humanity is. But there’s still something we can do before everything turns sideways (to the point of no return).

Also read:
10 Inspiring Travel Shows You Can Binge-Watch While Staying Home
10 Space Shows and Movies on Netflix If You Want to Get Out of Earth
10 Binge-Worthy Medical TV Shows to Stream Now

Check out these 10 environmental shows on Netflix, ranked by how bad the situation is:

Narrated by Woody Harrelson, this show proposes a solution to the climate crisis: regenerative agriculture. This practice focuses on healing the soil, repurposing waste, and avoiding the use of chemicals during farming. It's said to be a "new, old approach" that farmers across the world could get into.

How f*cked are we? Damaged soil is contributing greatly to our climate crisis—but it’s not over yet, according to this documentary.

Three freedivers-slash-journalists Gaya, Tanya, and Julia look into the mistreatment of sea mammals and their diminishing number in the wild, all for the purpose of entertainment. They follow the plight of 18 Beluga whales captured off the coast of Russia which were supposed to be sent to water parks in the U.S. A new law, however, prohibited the transport of these sea animals and left them stuck in small tanks in Russia for six years.

How f*cked are we? Thanks to environmental groups, marine wildlife captivity like those shown in the film is now extremely frowned upon. There is still some hope in regulating this type of "animal entertainment."

The illegal ivory trade around the world depends on the simple concept of supply-and-demand: the less elephants there are, the higher they can raise the price for ivory. The Ivory Game narrates how poachers kill off herds of elephants across the plains of Africa and how their ivory tusks are being smuggled across the streets of China. The documentary also looks at how the declining population of these herbivores leads to the damage of grasslands and forests; and ultimately, its effect on the global climate crisis.

How f*cked are we? Elephants are facing extinction within the next 15 years.

Peabody Award-winning and Academy Award-nominated Virunga focuses on how a group of conservationists try to protect Virunga National Park from war, poaching, and the threat of oil exploration. The park is home to the world's mountain gorillas, but big oil companies like Pharos Energy Plc. (formerly SOCO International) are seeing it as a rich and untapped resource for oil. On top of that, armed conflict in the region—including the M23 rebellion in 2012—poses a threat to the UNESCO World Heritage site.

How f*cked are we? Congo and the rest of Africa are blessed with natural wonders, which makes them an easy target for other countries in the name of so-called development. And that sounds awfully familiar.

SuryaGanga or SunGanges tackles not only environmental issues after the Ganga River Basin dried up because of intense river damming, but also how this affects the disadvantaged peoples living across India. It reveals the social, human, and environmental cost of the state's use and abuse of natural surroundings in pursuit of power.

How f*cked are we? A researcher-interviewee implies that Environmental Impact Assessments are being fabricated in India to get the green light for infrastructure projects.

Shot in 20 locations over four years, A Plastic Ocean tackles the cause and effect of plastic pollution in the whole world. It contrasts the beauty of our marine environment with a disturbing scene showing a thick layer of plastic debris floating in the middle of the Indian Ocean. There are also snapshots of plastic-filled dumpsites alongside homes in disadvantaged communities, plastic bottles at the bottom of the deep sea, and small pieces of plastic inside the stomach of a chick.

How f*cked are we? Plastic is now part of our food chain.

Oceanographer Sylvia Earle takes us around the planet and under the sea with awe-inspiring underwater footage. She has made it her life's mission to protect the ocean, but it's not easy especially in a politically charged world. Still, the scientist tries to open the viewers' eyes to what we can do.

Chasing Coral showcases the underwater world in full color: close-up shots of pink-hued soft corals, schools of striped fish, and hectares of hard corals. But it later goes on to show how these corals are turning white—known as coral bleaching—because of rising temperatures in our oceans. As that happens, marine creatures are left without a home, food chains are affected, and ecosystems effectively crumble.

How f*cked are we? World-renowned diver Charlie Veron, who’s been diving in the Great Barrier Reef for 45 years, is just “glad [he’s] not [our] age.”

The eight-episode documentary series Our Planet is not your typical environmental documentary piece. Sure, you'll see NatGeo-esque wide shots of herds of gazelles, a close-up of an orangutan, or an underwater scene of sharks. But the second half of every episode reveals what's actually going on in those beautiful places—mankind's persistent destruction of our natural wonders. A shot zooms in on a young Philippine eagle spreading its wings for its first flight, then zooms out to a wide shot of a forest that's partially destroyed by illegal logging and mining. And nothing's more heartbreaking than that.

How f*cked are we? Somewhere in Russia, walruses are jumping to their death off a cliff overlooking a beach.

If you've seen Netflix's Our Planet or BBC's The Blue Planet, then you've heard the distinctive voice of English broadcaster and natural historian David Attenborough. The 93-year-old has been the brain and voice behind many natural history programs since the '50s; and in A Life On Our Planet, he talks about the wonders of the natural world, how humanity is destroying every single part of it, and how we can turn things around—hopefully.

How f*cked are we? According to a teary-eyed Attenborough, a child born today would be witness to a dried-up Amazon rainforest and ice-free Arctic in 10 years, excess toxic methane in the air in 20 years, death of coral reefs and the fish population in 30 years, and a crisis in global food production and worse weather conditions in 60 years.