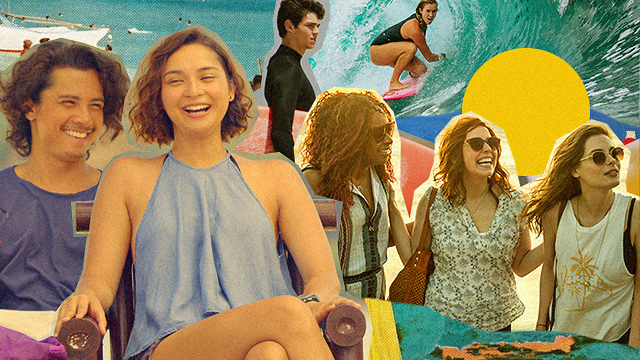 10 Beach Movies to Watch Since You Can't Go Out

Feel like you're in Hawaii or El Nido if only for two hours.

(SPOT.ph) It's the second summer season (or dry season as PAGASA calls it) that most of us are in quarantine. That means staying home to keep ourselves and the people we cohabit with safe, so plans of heading to the beach would have to take a backseat for now—no matter how much we want to feel the sand in our feet and breathe some fresh air again. While we can’t go out just yet, we can live vicariously through flicks set in some of the world’s chillest beaches.

Also read:
10 Inspiring Travel Shows You Can Binge-Watch While Staying Home
10 Pinoy Movies That Will Fuel Your Wanderlust

Missing the sun, sea, and sand? Here are beach movies to watch on Netflix while you’re staying home:

Paddle out with legendary athlete Bethany Hamilton as she competes in some of the world's major surfing competitions in Fiji, U.S., Australia, and Indonesia through Bethany Hamilton: Unstoppable. The 2019 documentary chronicles how the pro surfer went back into the sea after she lost her arm in a shark attack in Kauai in 2003 at the age of 13. Hamilton grew up and still resides in Hawaii so expect to feel that shaka vibe while watching.

The unlikely love story between Raffy (JC Santos) and Gela (Ryza Cenon) is set amid the towering limestones and white-sand beaches of El Nido, Palawan. In a press interview, Director Sigrid Andrea Bernardo revealed that the location is really part of the narrative where the world's most beautiful island is used as an allegory in finding peace amid chaos. Watch for the scene where the two ride a kayak to the famous Big Lagoon.

Set in O‘ahu, Finding 'Ohana follows how Brooklyn-raised Pili (Kea Peahu) rediscovers her Hawaiian roots. It showcases the natural beauty of Hawaii, including the 4,000-acre Kualoa Ranch and the white-sand beaches of Kaneohe. The movie also filmed some of its scenes in Thailand, specifically the shots of the underground waterfalls and cave.

Ibiza is set in Barcelona and Ibiza (obviously), but actually filmed in Croatia. It follows the story of Harper (Gillian Jacobs) and her two best friends' impromptu trip to the island, known for its nightlife and beaches. We'd join their trip if we could, TBH.

Malibu Rescue, which was released as a movie in 2019 then an eight-episode series, is like the teenybopper version of Baywatch. Tyler (Ricardo Hurtado) joins a summer program in Malibu Beach to become a junior lifeguard. Ah, to be young and free in Los Angeles—instead of being stuck at home.

Rachel Hamilton (Kristen Bell), who is left at the altar, accidentally drags her estranged father Harry Hamilton (Kelsey Grammer) on what is supposed to be her Caribbean honeymoon cruise. Luckily, luxury cruises have everything you need to distract you from awkward moments and even surprise you with some father-and-daughter bonding activities.

Coming-of-age romantic comedy film SPF-18 stars Carson Meyer as Penny, Noah Centineo as Johnny, Bianca Santos as Camilla, and Jackson White as Ash. The four characters are trying to figure out their way into the world, all while spending some time in Malibu Beach. There's a lot of surfing, people-watching (it is L.A. after all), and driving along the coast with windows down.

Documentary short Resurface looks at how surfing healed Iraq war veteran Bobby Lane from years of nightmares and depression. He crosses paths with Van Curaza, founder of Operation Surf, which is on a mission to help combat troops heal from the mental and emotional trauma brought by the war. More than a docu set on a beach, it's a story inspired by the waves.

QCinema International Film Festival Best Picture winner Apocalypse Child stars Sid Lucero as Ford, whose free-spirited lifestyle is shattered when his past comes back to haunt him. It's a visually stunning trip to sunny and laid-back Baler, which is known for waves fit for beginner surfers.

Most of this classic rom-com starring Drew Barrymore and Adam Sandler was shot on location in Hawaii, including Kaneohe Bay, Kualoa Ranch, Makapuu Point Lighthouse, and Sea Life Park. Expect to see floral button-down shirts, luaus, and leis. Because of this beach vibe, 50 First Dates' soundtrack is almost always part of every beach playlist.

Staying In Netflix Streaming Services Adventurer Savvy Seasoned 50 First Dates Movies Beach Apocalypse Child Resurface Spf 18 Like Father Malibu Rescue Ibiza Finding Ohana Mr And Mrs Cruz Bethany Hamilton Unstoppable Guide
Your Guide to Thriving in This Strange New World
Staying
In? What to watch, what to eat, and where to shop from home
OR
Heading
Out? What you need to know to stay safe when heading out