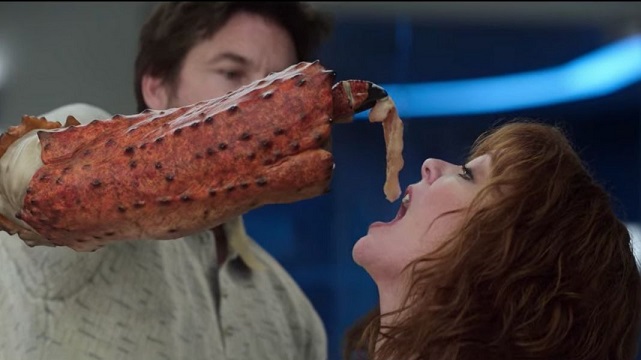 We all know who the real superhero of that movie was.

(SPOT.ph) Zany superhero comedy Thunder Force has everyone in stitches—or at least, momentarily distracted from the general anxieties of life. The movie has made it to the fourth spot on the local Netflix trending list as of writing so we're sure you're itching to know what went on behind the scenes! At the top of absurd moments in a hilariously absurd film is the running joke involving accidental superhero Lydia (Melissa McCarthy) and honest-to-goodness raw chicken.

To make it clear for the uninitiated: Lydia, one-half of the Thunder Force super duo, needed to eat raw chicken throughout the film. Why? We'll leave this article mostly spoiler-free so you'll have to find out for yourself. (Truth be told we don't really get it either, but the laughs were worth the strange plot point). No worries though as McCarthy and her love interest, a human-slash-crab hybrid played by Jason Bateman, didn't actually risk salmonella for this movie.

So what was the raw chicken in Thunder Force made of?

Fun fact: Falcone is also McCarthy's real-life husband. Cue us imagining him directing that ridiculous sex scene between McCarthy and Bateman. Plus, 12-year-old Lydia is played by their daughter, Vivian. Talk about a strange family affair.

But back to the raw chicken: "It was so believable that we all got completely grossed out every time we saw it," said Falcone, adding, "as did everybody who had to eat it." Especially for McCarthy. "I know it's a pear, but it's just hard not to imagine it as raw chicken," Falcone quoted her as saying. With all the crazy stuff she went through for this movie, it's clear eating pears made to look like raw chicken was "difficult for her to get through."

How It Started vs. How It's Going

Turns out Octavia Spencer—who plays the other half of Thunder Force, scientist Emily Stanton—and McCarthy really have been friends for a long time, just like the pair they play onscreen. Only it looks they haven't had a falling out!

The two have been friends IRL for 20 years, according to Netflix. Aside from the easy chemistry, the movie also benefited by adding some real-life elements to the story. Spencer really is considered the smartest one in their friend group while McCarthy is known for leaning more into her instincts—giving us some of the most hilarious improvisations in the movie.

Adventurer Savvy Comedy Netflix Streaming Services Thunder Force Melissa Mccarthy Jason Bateman Staying In
Your Guide to Thriving in This Strange New World
Staying
In? What to watch, what to eat, and where to shop from home
OR
Heading
Out? What you need to know to stay safe when heading out