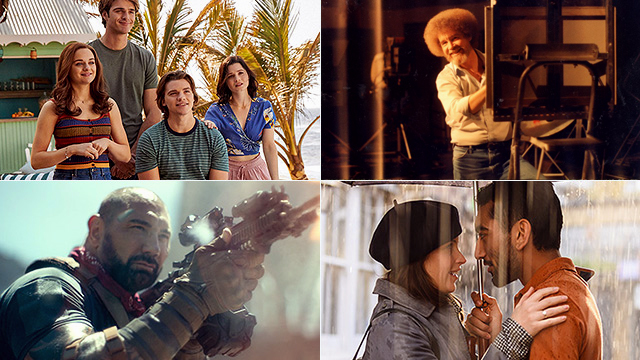 Netflix and Thrills: 10 of the Most Exciting Summer Releases

The streaming platform stays true to their promise of a movie a week.

(SPOT.ph) Do you ever spend more time looking for something to watch than actually watching? Are you tired of opening your streaming site and seeing hundreds of options? Can’t seem to actually find anything to watch? Boy, do we have the answer for you. Home Shopping Network jokes aside, we’re completely serious when we say Netflix is dropping a new movie (or two!) every week in 2021, so the concern is real.

The streaming service has dropped their full slate of upcoming movies for summer, which is from April to August in their time zone (Remember: We don’t actually have a “summer” here, says PAGASA). Ignoring the concept of seasons, all that means for us is a bunch of titles are coming real soon. So to help prevent you from freezing at the idea of having to choose, we're rounding up the most exciting ones! From an action-packed Zack Snyder zombie film to an adaptation of a touching Jojo Moyes book, these titles deserve a spot on your watch-list.

Time to Netflix movies and not-chill when these 10 exciting titles drop in the summer:

The gist: A teenager from Harlem is accused of murder, turning what was once a bright future dark.

Unique selling point: This movie is based on a 1999 novel of the same title by Walter Dean Myers. The book has become one of those tomes endlessly studied and analyzed, rightfully so, thanks to its deep reflection of real life. Expect the same levels from this pensive 2018 Sundance entry.

The gist: A woman wakes in a cryo box with limited oxygen supply. And she has no memory of who she is. And there appears to be some sort of rat. And a voice? Are you freaked out because we’re freaking out.

Unique selling point: Like being stressed out? Then put this sci-fi thriller from French horror master Alexandre Aja (The Hills Have Eyes) on your list.

Army of the Dead

The gist: Zack Snyder is taking on the zombie genre with this absolute banger of an action flick. Las Vegas has been walled off from the rest of the world after a zombie outbreak. Dave Bautista is an old war hero who assembles a ragtag group to retrieve a ridiculous amount of money from inside the alpha zombie-infested area.

The gist: Kevin Hart plays a man bereft after his wife’s death—leaving him to raise their kid as a single dad. Note that though this is Kevin Hart we’re talking about, this movie is classified as a drama. Prep the tissues.

The gist: Remote area colder than your ex’s heart. A collapsed diamond mine. One ice driver on the crazy mission to save the lives of miners trapped in what is essentially a frozen ocean. And yes, the ice is thawing.

Unique selling point: Liam Neeson. Not for the hypertensive.

The Last Letter from Your Lover

The gist: Two love stories unfold in different times, connected through a journalist who finds a trove of secret love letters from 1965.

Unique selling point: It is based on acclaimed romance writer Jojo Moyes’ book of the same name. Remember that Emilia Clarke starrer Me Before You (2016)? That was also based on another book by Moyes. Best prepare your heart.

The gist: Elle (Joey King) is heading to college soon and she was accepted to both Harvard, where her boyfriend Noah (Jacob Elordi) is going, and Berkeley, where her BFF Lee (Joel Courtney) is going. You know where this is going.

Unique selling point: Oh yes, there’s a third and final one. Find out how they end the whole YA trilogy—and wonder why these high school kids are nothing like you were—when the movie drops in August.

Unique selling point: Alright kiddies, listen up. This Netflix movie is a modern remake of '90s cult classic She’s All That, which follows essentially the same storyline. TBH, we just want to see how they redo that scene of her walking down the stairs after a quintessential teen movie make over.

The gist: A man vows to avenge his wife’s death while protecting their only daughter.

Unique selling point: So details are scarce, plot-wise, as of writing, but the idea of a vengeful family man played by Jason Momoa has us hooked.

The gist: A documentary about Bob Ross! Yay, happy times. Or no? This deep dive into the life and times of the celebrated painter promises to reveal a more sinister tale, one involving once trusted partners slowly hijacking everything Ross built. Even after his death in 1995.

Unique selling point: Sinister plots aren’t exactly what one thinks of when the name of Bob Ross is brought up. The host of 100% wholesome show The Joy of Painting has always been the image—and meme—of good energy. To think that such a role model may have been betrayed by those close to him is near impossible, and is definitely making us want to know more.

Advneturer Savvy Seasoned Netflix Streaming Services Oxygen Monster Army Of The Dead Fatherhood The Ice Road Kissing Booth 3 The Last Letter From Your Lover He's All That Sweet Girl Bob Ross Staying In
Your Guide to Thriving in This Strange New World
Staying
In? What to watch, what to eat, and where to shop from home
OR
Heading
Out? What you need to know to stay safe when heading out