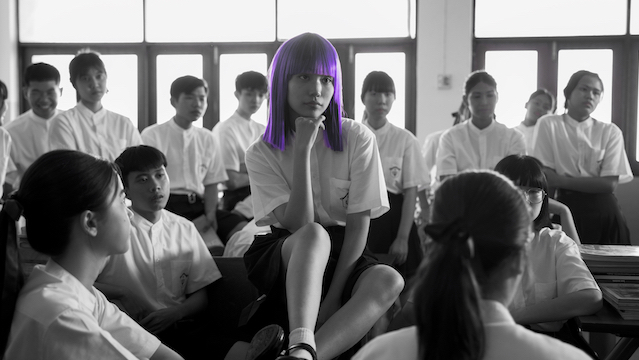 (SPOT.ph) What do you do if you find yourself in an online video chat with no less than Kitty Chicha Amatayakul—who’s known for playing the mysterious new-girl-in-school Nanno in Netflix’s Girl From Nowhere—wearing a school uniform and sporting full bangs, the character's default look since Season 1?

It was easy to think we were caught in an inception of sorts when Kitty Chicha started talking about what she'd do if she were to write an episode of Girl From Nowhere. After all, we don’t think anyone wants to be Nanno’s next target, if the past season of the hit Thai anthology series is anything to go by.

“There [are] two things on my mind right now. The first thing is maybe they should do like an online Zoom class,” she says, the irony of it not lost on the Philippine press attending the virtual conference for Season 2.

Season 2 takes Nanno on a brand-new set of adventures, still hopping from one school to another. She tackles more social injustices in the new season, and serves her brand of justice in unpredictable and creative ways. Kitty Chicha describes all the episodes as “shocking,” especially since the stories were inspired by true events. In this new season, viewers can also look forward to a version of Nanno who better understands what it’s like to be “more human.” “It is something new to her [Nanno], and I think in some terms, she is actually enjoying, exploring, all kinds of these feelings and expressions that the human world [gives] her.”

“I think she has this, her own kind of like, rules or judgments…” This might come as a surprise to some viewers, but Kitty Chicha believes that Nanno “has a very, very kind heart,” and considers that both a strength and weakness. She brings up last season’s “Lost and Found” where Nanno showed her softer side, seemingly feeling something more towards episode protagonist TK. “She couldn't actually break the rules and go back to him or something like that. So, it hurts her, missing something.”

Among the episodes in Season 2, Kitty Chicha picks episode six as her favorite. “We always want to surprise fans and the viewers, so this time we had our little experiment, putting the whole episode in black and white.”

Nanno, the Cunning Yet Charming Character

Fans of the series have come to love Nanno, eccentricities and all. Her laugh, for one, is something that people always ask Kitty Chicha to do. She says that Nanno’s uncanny laugh has to do with the character not knowing how to laugh like a human. “Every time she laughs, It's like right from her heart or soul. It's a great laugh,” she explains.

We also asked for one signature Nanno move—the way she stretches her arms up in the air, which usually happens towards the end of an episode. “The first time it's happened out of nowhere, like, I feel like, ‘Okay, I'm done with the day, I need like a little bit stretching,' and it was caught on camera,” she shares. The director spotted her doing it, and from then on, it recurred in various episodes. “So, after that, every time I feel like it's been a bit of, like, a rough day but at least I'm done, Nanno would do that.” Kitty Chicha then proceeds to stretch her arms like Nanno to demonstrate, and with that, we snap out of our journalist hat and wonder whether we’re imagining things or not.

This brings us to Kitty Chicha's second Girl From Nowhere idea: “The other one is, maybe, maybe Nanno might enroll as the new girl on the production, or Girl From Nowhere Season 3, if Netflix approves that.” If that isn’t Kitty Chicha going full-on Nanno in real life, we don’t know what is.

Girl From Nowhere starts streaming on Netflix on May 7. Photos courtesy of Netflix.

Streaming Services Girl From Nowhere Adventurer Savvy Thai Series Tv Shows Netflix Thailand Kitty Chicha Amatayakul
Your Guide to Thriving in This Strange New World
Staying
In? What to watch, what to eat, and where to shop from home
OR
Heading
Out? What you need to know to stay safe when heading out