Magic Mike, Ride or Die, and More Steamy Movies to Stream
Loading
Already a member? Log in
No account yet? Create Account
Spot.ph is your one-stop urban lifestyle guide to the best of Manila. 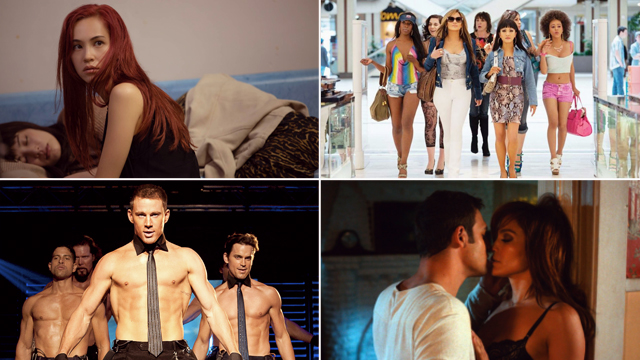 10 Steamy Movies to Stream, Ranked By How Much You Shouldn’t Watch Them With Mom

This is not the weekend to watch these R-rated titles.

(SPOT.ph) Is it just us or do parents have a penchant for walking in on you right when the movie you’re watching shows anything mildly R-18? Avoid that cringe moment by taking note of these 10 movies to never watch when your parents are within a two-kilometer radius. Use this handy-dandy guide specifically for that purpose. Or, if you have a cool mom like Regina George does, then do the opposite, no judgment here!

We list down 10 movies that are 0% family friendly, ranked from the least scandalous to the absolutely scandalous. Plus, take note of what exactly about the movie will have Mom revoking your birthright. Just for research purposes.

These 10 steamy movies are best avoided this weekend:

Gist: Ford (Sid Lucero) is a freewheeling Baler local who believes he is the illegitimate child of director Ford Coppola (Remember when they shot Apocalypse Now there in the '70s?). When his childhood friend returns to Baler as a congressman, the idyllic-looking surface of their bubble begins to break.

Scandalized-mom factor: Understated and poignant, Apocalypse Child is an indie hit that deserves a watch with like-minded cinephiles such as your mom—except for all the slow, dramatic, and sweaty love scenes that may throw off the experience.

Gist: Based on a true story, this movie follows an epic group of super savvy strippers swindling their no-good clients. Think fast-paced con movie but with badass women characters who actually have layers.

Scandalized-mom factor: So there's sex, drugs, and incredible—and we mean incredible—pole dancing scenes, but we think Mom might forgive it thanks to the awesome story.

Gist: This movie is based on Scott Thornton’s memoir of his tempestuous and very toxic five-year relationship with Liberace.

Scandalized-mom factor: A perfect watch if Liberace was your mom's fave in the '80s. Just note that this film is not subtle about Thornton (Matt Damon) and Liberace (Michael Douglas) getting it on. Also, it’s Las Vegas in the '80s so yes, drugs are a factor too. Also, have we mentioned it’s a deeply toxic relationship?

Gist: Based on a real-life Parisian brothel-keeper of the same name in the 1960s, Madame Claude follows how this pleasure den became entangled with French politicians and the underworld.

Scandalized-mom factor: A movie about strong women subverting the usual power dynamic is always a good watch in our books. You just have to close your eyes every time a nude or bloody scene pops up if you’re watching with your mom—so basically maybe a third of the movie.

Scandalized-mom factor: An Italian pervert gag-line that wouldn’t fly today, a sex den in Amsterdam, nude beaches with lots of dicks flying around, and even a little bit of incest—all treated in a hilarious, irreverent manner. Yeah, you’re going to need a super cool mom to watch this with.

Gist: Rei (Kiko Mizuhara) saves her former classmate Naenae (Honami Sato) from her abusive husband by straight up murdering him, forcing the two girls to flee—and fall into a tempestuous affair—together.

Scandalized-mom factor: Physical abuse, lots of sex and nudity, plus a gruesome murder reminiscent of that Gone Girl scene. It’s a wild ride, emotionally and physically.

Gist: Gia Carangi is credited as the OG supermodel, arguably the first that broke the line to become a celebrity—who ultimately died at just 26 years old in 1986, practically abandoned by all her so-called friends. Years later in 1998, her tragic life would be turned into a movie starring Angelina Jolie.

Scandalized-mom factor: The biopic has been criticized for being reductive of Carangi’s life (Read: A voyeuristic look at the rise and fall of the supermodel) so you can expect lots of sex, hard drugs, abuse, and whatnot. Angeline Jolie’s performance is possibly the real reason to watch this film.

Gist: Claire (Jennifer Lopez) is going through a long and winding divorce from a cheating husband. Things get complicated when her neighbor’s nephew moves in and he turns out to be a tad obsessive.

Scandalized-mom factor: We’ll admit. This movie isn’t even campy-bad, it’s just bad. There is is that one ridiculously steamy love scene between J.Lo and the neighbor’s nephew that makes it worth watching though—just really not when your mom’s around.

Scandalized-mom factor: TBH, we have a feeling you and mom have watched this already—separately. Depending on your dynamics, this movie could either be the best or the worst Mother’s Day watch. Do you dare give it a try?

Gist: Tom Cruise and Nicole Kidman play a typical respectable couple who end up tangled in the business of a top-secret and murderous high-class sex club.

Adventurer Savvy Seasoned Netflix Hbo Go Streaming Services Apocalypse Child Behind The Candelabra Madame Claude Eurotrip Ride Or Die Gia The Boy Next Door Magic Mike Eyes Wide Shut Guide
Your Guide to Thriving in This Strange New World
Staying
In? What to watch, what to eat, and where to shop from home
OR
Heading
Out? What you need to know to stay safe when heading out