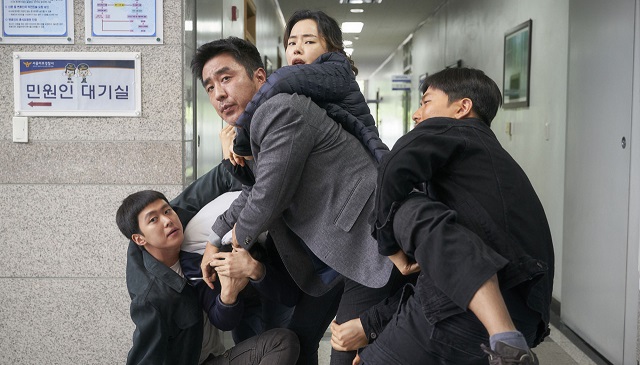 (SPOT.ph) A bunch of cops go undercover as operators of a fried chicken joint—only business starts booming and gets in the way of their OG goal to bust up a major drug ring. That is the totally surreal plotline of Extreme Job, the action-comedy flick that holds the title of second most-watched movie in South Korea. Around 14.5 million people flocked to the cinemas—in 2019 B.C. (Before COVID), don't worry—during its screening and now you can get in on the action when it streams on the Korean Cultural Center website from Friday, May 7, to Thursday, May 13. Best part? It's totally free.

Suddenly craving S.K.-style fried chicken? Same. This title is one of a total of seven movies available to stream as part of the 2021 Korean Film Festival "Full House: Fun For All." Organized by the Korean Cultural Center (KCC) and the Film Development Council of the Philippines, it will run on the KCC site from May 7 to May 27.

Korean Movies to Watch During the 2021 Run:

Also on the slate is disaster comedy Exit wherein a rock-climber has to save his town from a poisonous gas leak. It will stream at the same time as Extreme Job.

Comedy movies is next up from May 14 to May 20. Stream Miss and Mrs. Cops, a movie about two cop sisters-in-law who take on a ring of men profiting of off rape videos, and My Annoying Brother, about a man who helps his terminally ill brother compete at the Paralympics.

From May 21 to 27, you can catch three family-drama movies. Prep the tissues.

An adaptation of a popular book of the same name, Kim Ji-young, Born 1982 follows the story of a 30-year-old woman who appears to be being possessed by her mother and grandmother. And yes, that is Gong Yoo of the Goblin series.

The Soul-Mate follows a rookie police officer who falls into a coma only to realise his archenemy can see his spirit. Meanwhile, Keys to the Heart follows two very different brothers on their journey to becoming a family.

Adventurer Savvy Seasoned Korea Film Development Council Of The Philippines Fdcp Korean Cultural Center Extreme Job Film Festival Staying In
Your Guide to Thriving in This Strange New World
Staying
In? What to watch, what to eat, and where to shop from home
OR
Heading
Out? What you need to know to stay safe when heading out