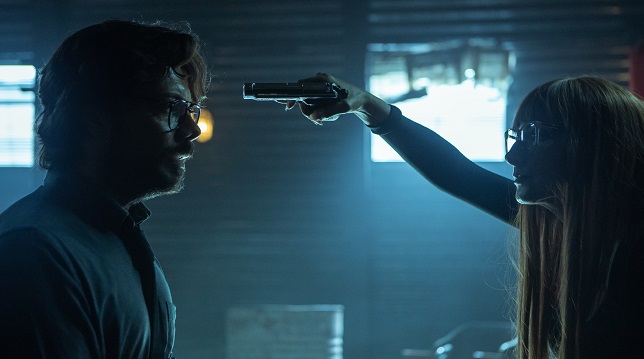 It seems the Professor is in real trouble this time.

(SPOT.ph) Spanish heist series La Casa de Papel first landed on our screens in 2017—and four years later, we finally get to see how things end for our favorite gang of thieves. Yup, the fifth and last season of Money Heist, as it is known locally, is dropping in two parts this year. We've already seen the dramatic teaser and now Netflix has dropped a first look! Check the pics out below:

Yup, it looks like the Professor (Álvaro Morte) may finally, officially, truly, really be out of cards to play. Season 4 left us with a major cliffhanger as the group's heist of the Bank of Spain goes south—with the Professor held at gunpoint by Sierra (Najwa Nimri), the ex-cop on their case. We've already lost Nairobi (Alba Flores) but it looks like we may have to prepare for a few more deaths by the end of this heist.

Here's What We Know About Money Heist Season 5:

The last season drops in two parts: the first volume on September 3 and the second on December 3. Three whole freakin' months. We know.

By the start of Season 5, the gang have been holed up in the Bank of Spain for more than 100 hours—and they're yet to face their greatest enemy yet, the literal army. "What began as a robbery will turn into a war," says the Netflix description.

According to creator Álex Pina, they split up the last season into two for very special reasons. They "used every tool we could to create the sensation of a season finale or series finale in the first volume itself," Pina said in a Netflix statement. The first half will present the gang "in an extremely aggressive genre."

This means that the second volume will be more about where the characters are emotionally. "It is a journey across their sentimental map that connects us directly to their departure," added the creator. Ready your hearts, folks.

Adventurer Savvy Seasoned Money Heist Netflix Streaming Services Staying In
Your Guide to Thriving in This Strange New World
Staying
In? What to watch, what to eat, and where to shop from home
OR
Heading
Out? What you need to know to stay safe when heading out