Best Family Movies To Stream on Netflix PH for Father's Day
Loading
Already a member? Log in
No account yet? Create Account
Spot.ph is your one-stop urban lifestyle guide to the best of Manila. 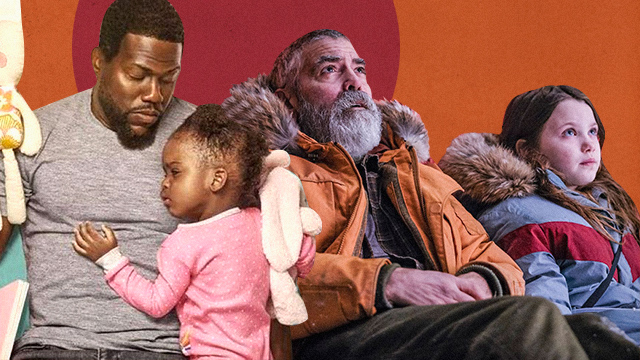 10 Heartfelt Movies to Stream on Netflix, Ranked by How Likely They Are to Make Dad Cry

(SPOT.ph) Whoever said “boys don’t cry” doesn’t know what it means to be a parent (or anything about being human, really). So for Father’s Day, we suggest putting down the stereotypical mindless action flicks for something that might actually force the entire family to show some emotion, Dad included. We round up some flicks you can easily stream, from feel-good family fun to heart-wrenching dramas that won’t leave a dry eye in the room. And for easier picking, they’re ranked by just how many buckets they’ll make you cry.

Also read:
Time to Treat Dad: The Eats to Order for Father's Day 2021
The SPOT.ph 2021 Father's Day Gift Guide: 20 Gift Ideas for Every Budget
10 No-Fail Tearjerker Movies for When You Need a Good Ugly Cry, According to Spotters

Let the tears fall with these touching family movies to stream on Netflix for Father’s Day:

Gist: The robot apocalypse has arrived—via an ultra-smart smartphone, a plot point your dad might wryly enjoy—and the only people who can stop it are the Mitchells, a family that might be even more dysfunctional than your own.

What will make Dad cry? There are a lot of dad-sensitive topics here, from watching your first kid leave the nest to struggling to connecting with your own offspring, but we think he’ll most relate to dad Rick freaking out whenever he has to do anything tech-related.

Gist: The premise of this Academy Award-winning documentary feature seems pretty straightforward. It follows filmmaker Craig Foster throughout the timespan of one year as he builds a relationship with an unexpected friend: a wild common octopus.

What will make Dad cry? What does a wild common octopus and your dad have in common? Their penchant for teaching you about life in the weirdest ways possible. And that was our terrible attempt at a dad joke. Seriously speaking, the connection between Foster and his little friend—and how it affects Foster’s own relationship with his kid—make for definite must-watch.

Gist: Comedian Kevin Hart goes the full-drama route in this touching tale of single fatherhood. Matthew Logelin must raise his daughter alone after his wife unexpectedly dies—cue a poignant mix of the good and bad times of raising a kid alone.

What will make Dad cry? You can already tell by the summary alone that this is the type of movie that calls for tissue. Lots of it. It might be a little too on the nose for Father’s Day but hey, single parents of all kinds deserve all the credit we can give them.

Gist: Terminally ill scientist Augustine (George Clooney and his beard) decides not to go with the rest of humanity as they try to escape an impending apocalypse—only to find out that a little girl was accidentally left behind, too. Cue a surprisingly pensive adventure about what happens when humanity has nothing left to lose.

What will make Dad cry? Okay, so this isn’t your typical, adrenaline-filled, end-of-the-world movie. Instead, Midnight Sky is a slow and beautiful look at a dad owning up to his mistakes, and well, what it truly means to be human.

Gist: What’s a teen rom-com doing on a Father’s Day streaming list? It’s absolute best, that’s what. The Half of It is a refreshing take on the queer coming-of-age story, and whether or not you’re queer doesn’t matter. There’s something about this Cyrano-esque tale between the nerd, the jock, and the popular girl that is sure to hit a chord with everybody, your dad included.

What will make Dad cry? Look, dads aren’t perfect, as seen in the relationship between Ellie Chu (Leah Lewis) and her father Edwin (Collin Chou). But that definitely didn’t stop them from learning to love, and accept, each other.

Gist: Peter Pan is now Peter Banning (Robin Williams), a workaholic lawyer with a strained family life. When his children are kidnapped by Captain Hook (Dustin Hoffman) though, he must return to Neverland and more importantly, remember who he was.

What will make Dad cry? The late, great Robin Williams. And if seeing the actor in one of his best-known roles isn’t enough to make him tear up, then maybe this throwback to his childhood via a Steven Spielberg classic will do the trick.

Gist: Precocious Vada (Anna Chlumsky) is the daughter of widowed funeral director Harry Sultenfuss (Ghostbuster Dan Aykroyd), both of whom clearly haven’t healed from the sudden death of her mother years back. The arrival of makeup artist Shelly DeVoto (Jamie Lee Curtis) upends the careful balance the two have been living on—and so does another unexpected tragedy.

What will make Dad cry? If you’ve watched this '90s classic then you know exactly what will get the tears rolling. If not, then just prep for this harsh reminder that life isn’t permanent—but that doesn’t mean you can’t be happy.

Gist: Director Cathy Garcia-Molina pulled out all her drama prowess for this one. Ronaldo Valdez plays the widowed patriarch with four kids who one day calls them up and tells them he has been diagnosed with cancer and has just seven weeks to live. He stipulates that they must spend the next seven Sundays together—ensuing in so many layers of family problems being unearthed.

What will make Dad cry? There is nothing scarier than dying alone. Except maybe finally having to confront your Filipino family members with all the issues you’ve been carrying since you were born related to them.

Gist: Paul Edgecomb (Tom Hanks) is a prison guard assigned to the death row during the Great Depression. There, he meets an enigmatic prisoner named John Coffey (Michael Clarke Duncan) who appears to have a supernatural ability to heal—as well as encountering some truly shady figures.

What will make Dad cry? Name one Tom Hanks movie that wouldn’t make you cry on some level. TBH, pretty much each one belongs on this list but this cult classic stands out as a great exploration of whether humans are good or bad—and that execution scene just cuts us deep every single time.

Gist: This biopic takes on the tale of Chris Gardner—based on the memoir of the once-homeless salesman—as he struggles to find a job while taking care of his young kid.

What will make Dad cry? The classic tale of the great lengths a parent would go through to put food on the table never gets old—or any less poignant. Add the stellar performances of Will Smith as a dad trying to prove his worth to himself, the world, and his real-life son, a baby Jaden Smith, and we’re sure Pops is walking away from this classic with his eyes glistening, at the very least.

Adventurer Savvy Seasoned Fathers Day Netflix Streaming Services The Mitchells Vs The Machines Hook My Octopus Teacher Fatherhood Mignight Sky The Half Of It My Girl Seven Sundays The Green Mile The Pursuit Of Happyness Tom Hanks Will Smith Robin Williams Greener Guide Staying In
Your Guide to Thriving in This Strange New World
Staying
In? What to watch, what to eat, and where to shop from home
OR
Heading
Out? What you need to know to stay safe when heading out