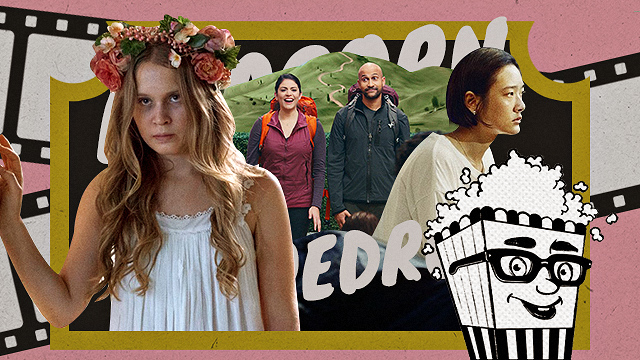 We can't say we miss plane rides this time.

(SPOT.ph) Looks like we're in for an extra-rough few weeks, folks. The weekend is bound to be stressful as we all prepare to go under ECQ all over again. So if you're in need of a breather, we list down some titles you can stream! From a fun title that'll have you smiling to thrillers that'll have you screaming, Popcorn Pedro has it listed down. Don't forget to take some time to chill for a bit if you can.

Put Popcorn Pedro's picks of what to watch on your weekend stream list:

Popcorn Pedro says: Amy Adams is always great. Whether she's in a cutesy rom-com (Leap Year) or a critically acclaimed sci-fi drama (Arrival), she aces each and every assignment. And as an alcoholic crime reporter returning to her severely idyllic hometown to cover the murder of two girls? Just stunning, in a painful and gripping kind of way. Adams is Camille Preaker. She comes home to her hometown of Wind Gap, Missouri, to her socialite mother and younger sister on assignment to cover the deaths of two girls.

As psychological thrillers usually go, there is of course much more than meets the eye. And trust me, this thriller miniseries—binge-able in under eight hours (please don't take that as a challenge)—will reel you in with layer upon layer of cinematic mystery. Its twists and turns were much-talked about when it dropped in 2018 so if you've managed to steer clear of spoilers, I suggest you don't watch this at night.

Popcorn Pedro says: I'll just say it. If you're looking for an action movie with substance, this ain't it. But how about a fun mash-up of action, gore, thriller, and just good ol' adrenaline? Yeah, I have something for you. A mom-and-son duo en route to the U.S., where the mom is supposed to get help for some mysterious disease, end up on a hijacked plane. Only it looks like the bad guys are in for a lot of trouble because, surprise, the mom is vampire. Yeah, no really. Look, as they say, time wasted having fun isn't really time wasted at all, right?

Popcorn Pedro says: Late-night comedy mixed with Broadway, anyone? Keegan-Michael Key and Cecily Legler Strong take their Comedy Central and Saturday Night Live chops to this hilarious parody-of-slash-ode-to musicals. The two star as a couple who go on a hike to try and fix their relationship—why this was the step they took, I really can't say—and end up in a magical, literally musical town called Schmigadoon. The two are trapped in the world of impromptu singing, permanently clean clothes, and overly bright sets until they find true love. Honestly, sign me up for this theater-kid dream.

Popcorn Pedro says: Imagine trying to explain to your Southeast-Asian mom what a minimalist lifestyle is. Or worse, try to make her throw out all the stuff in the China cabinet. That's more or less what Jean (Chutimon Chuengcharoensukying of Bad Genius fame) sets off to do upon her return home to Thailand after three years in Sweden. There's even a Marie Kondo reference! Yet in the process of decluttering, it turns out Jean herself has some things—or some one—she can't let go of either. And it seems, so does her mother. This moving drama is sure to spark joy, tears, and maybe even some inspiration to get your life together, too.