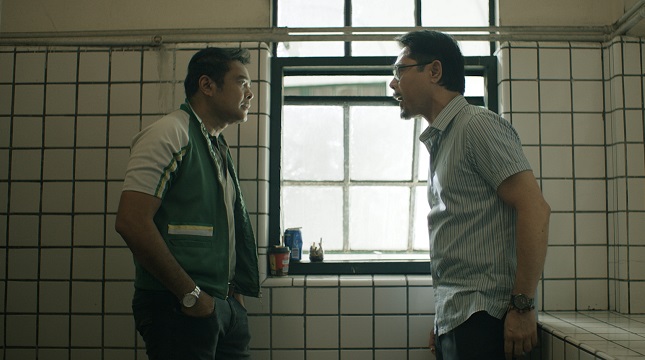 Erik Matti Knows You Downloaded the OTJ Movie; Don’t Do the Same for the Mini-Series

He talks about OTJ the series, buro, and the entertainment industry.

(SPOT.ph) On the Job was a commercial flop when it first came out in 2013. Sure, it premiered at Cannes, but back home, practically no one came to see the game-changing crime movie in cinemas. “There were only six theaters that extended for seven weeks, and those are ‘yong mga sosyal-sosyalin,” director Erik Matti tells SPOT.ph. Which is why when a year later people began buzzing about On the Job, he and the team were confused. “’Yon pala, na-download na,” he says laughing. “Biglang may word-of-mouth, ‘Grabe! On the Job!’ Mga nasa Twitter, ganoon.”

Now nearly a decade after the original OTJ movie was released, the story continues as an HBO Asia Original. Better yet? It is now a six-part mini-series. You can check out the whole extended universe, in a manner of speaking, as it drops on HBO Go on September 12. And this time, Direk Matti has high hopes that Pinoy audiences will immediately give this gritty and sprawling crime drama the attention it deserves (and maybe even be streamed legally, but we digress).

Okay, so we have to clear this up a bit: The HBO Asia series has six episodes at around one hour each. The first two episodes are made up of the original 2013 movie with added never-before-seen content. As Matti explains, the first cut of the OG film was over three hours long—which means that in the new episodic format, they were able to highlight the stories of other characters as well; aside from gun-for-hire Mario (Joel Torre), we get to see more of his apprentice Daniel (Gerald Anderson) and conflicted NBI agent Francis (Piolo Pascual).

Episodes three to six are all completely new content and picks up immediately where the movie left off. (Spoiler alert: After Bernabe [Rayver Cruz] picks up the cell phone holding very incriminating evidence). A different cut of the new content is what makes up the three-hour-or-so long movie On the Job: The Missing 8. This is the film that premiered at the 78th Venice International Film Festival.

OTJ Works Best as a Series

One of the things that had people shocked in 2013, aside from the brutal and raw take on the action genre, is that the movie was based on a true story—that of inmates being let out of prison to assassinate people. “So akala nila ’yon na ’yong main reason bakit may On the Job,” says Matti—but that was just one of the national issues he wanted to tackle. “Ang gusto talaga namin is to explore the jobs in different sectors of society and what it takes—lahat ng moral dilemma, lahat ng moral choices nila—for them to thrive in that particular job.”

Following the 2013 film, they had three topics in mind: the medical field, gambling, and journalism. Illegal gambling in the country was up next on their slate, until 2016 began and the current administration took over—and with it, press freedom became a topic once again. As Matti puts it, they want “to find out the marriage of corruption and illegal na ginagawa na ina-allow ng government.”

Enter the new characters of Sisoy (Heneral Luna’s John Arcilla), a journalist who believes in the government, the feisty journalist Weng (Lotlot De Leon), who stands opposite Sisoy in their opinion on the authorities, and Arnel (Christopher De Leon), owner and publisher of the La Pez news pub.

Returning are, of course, Torre as Mario, Joey Marquez as jaded cop Joaquin Acosta and Leo Martinez as the vile General Pacheco. The 2013 movie ended on a wide-open note—and the continuation will bring us on an even wilder ride, fitting the series format perfectly. “Dahil series na siya, you are accepting na marami na siyang plot kasi alam mo isasara rin siya eventually.”

Matti laughingly shares he ended up with another three-hour-and-half movie in his hands when making the sequel. When he was set to present it to the producers, he knew he needed backup plans: either split the sequel into two movies for theater screenings, or turn it into a series. At the time, HBO Asia was not part of the OTJ project. Matti and team took the chance and sent the new footage over, attaching the old movie “so that seamless ’yong experience.” At that point, Matti was working with HBO on anthology series Folklore, so that gave them some hope. “One week later, sumagot sila, ‘We want the whole thing.’”

When the first trailer of the 2013 movie came out, Matti admits he understands many were probably confused. “The trailer comes out: Piolo Pascual may hawak na baril tumatakbo, may mga tren, Gerald Anderson, ang daming tattoo, madungis. People at that time [we’re probably saying], ‘Ano ba ‘to?’ Parang bangungot siguro ang tingin nila sa trailer na ‘yon ‘di ba?” he said, laughing. Pascual and Anderson went from clean-cut pretty boys in dramas to gritty gun-toting characters in a movie which exposed a part of the nation no one wanted to touch on—“Ang dudungis ng mga artista, ang didilim, and doing that, no one came and saw it.”

But that was back in 2013. With all the downloads and the buzz that came a year later, Matti hopes “the pedigree of the first one would push people to welcome this new series.”

Getting an audience interested in something new will always be difficult, but not impossible. “Feeling ko ang kriminal talaga diyan is that a lot of us have come to believe na eto na lang na klaseng content ang pwede nating gawin,” said the director, who has always been outspoken about the formulaic stories the entertainment industry pushes out. And speaking as a filmmaker, Matti said it can be easy to fall into the trap of creating canned, marketable content. “You slowly forget there are other stories that when given a chance the audience will really embrace it, and that’s what we saw with the first On the Job.”

Now with the added reach of streaming, “We have access to a lot of content now, popular ones, entertaining, may iba cerebral,” Matti points out. There is hope that our audience will become more adventurous in watching all kinds of content. “Alam na nila ‘yong lasa ng buro so ngayon kaya na nila ulit kumain ng buro ’diba?”

Adventurer Savvy Seasoned Erik Matti On The Job Hbo Go Streaming Services Staying In
Your Guide to Thriving in This Strange New World
Staying
In? What to watch, what to eat, and where to shop from home
OR
Heading
Out? What you need to know to stay safe when heading out