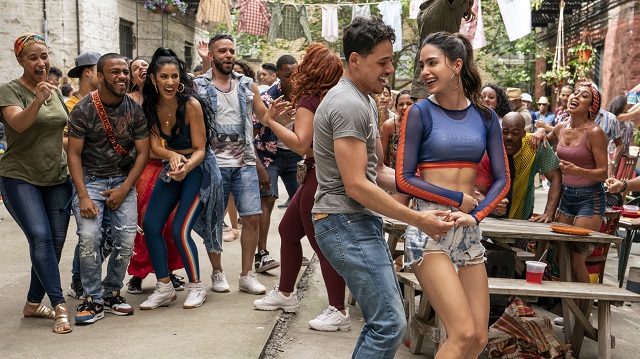 In need of a musical boost? Check out In the Heights.

(SPOT.ph) Whether you're a Hamilton fan or not, you're sure to have heard of Lin-Manuel Miranda. Remember during the pre-pandemic times when the autobiographical play was everywhere? Well, if you never got to watch the musical itself—whether on streaming or live—there's another must-watch Miranda work coming soon to streaming, and yup, this time it will be available in the Philippines. In the Heights drops on HBO Go on Thursday, September 16!

Lin-Manuel Miranda's In the Heights streams on HBO Go

In the Heights is set in the tight-knit community of Washington Heights in Upper Manhattan, New York City. Against this NYC backdrop, the play explores the lives of the neighborhood's predominantly Dominican residents as they work to make their little dreams big. At the center of it all is the charismatic shop owner Usnavi (Anthony Ramos) and his friends, Vanessa Morales (Melissa Barrera), Nina Rosario (Leslie Grace), Benny (Corey Hawkins), the neighborhood matriarch Abuela Claudia (Olga Merediz), and many more.

In the Heights actually came long before Hamilton did, during Miranda's sophomore year in college to be exact. He wrote the first version during his time at Wesleyan University but it would not be until years later in 2008 that it would first play on Broadway! The staged musical would go on to have nearly 1,200 performances, as well as 13 Tony nominations, four of which—Best Musical, Original Score, Choreography and Orchestrations—it won.

Reaching for your dreams is an age-old lesson that many stories have tried to impart, but with this take from Miranda, it becomes refreshing—and honestly uplifting too. As he said in an HBO Go statement after watching a staging of the play, "I went to see something a child wrote—a child version of me."

Adventurer Savvy Seasoned Lin Manuel Miranda In The Heights Hbo Go Streaming Services
Your Guide to Thriving in This Strange New World
Staying
In? What to watch, what to eat, and where to shop from home
OR
Heading
Out? What you need to know to stay safe when heading out