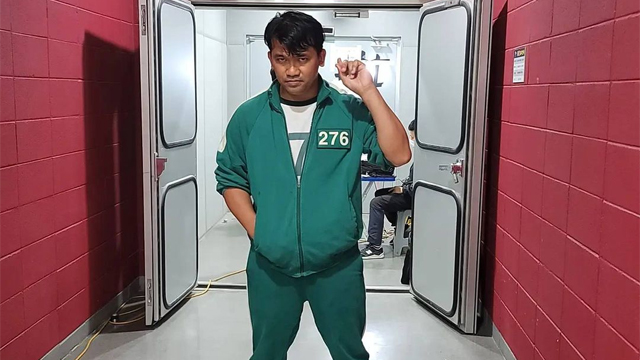 You can spot him in the Tug-of-War episode.

(SPOT.ph) Korean series Squid Game dropped on Netflix on September 17 and has since ranked number one in 22 countries—the Philippines included, of course. While the series gives a glimpse of  Korean culture, the show draws a number of similarities with the Filipinos' way of living: from struggling to make ends meet and dealing with loans you can't get out of. There's also a Filipino actor in the hit series: Christian Lagahit, who has been staying in South Korea since 2015.

Lagahit is known as Player 276 in the bloody games. He appears in the fourth episode, "Stick to the Team," where he teams up with some of the show's main cast including Seong Gi Hun (Lee Jung Jae) and Cho Sang Woo (Park Hae Soo) and wins a fatal game of Tug-of-War.

In an interview on CNN Philippines' New Day on Friday, September 24, Lagahit shared that he actually auditioned for the role of Ali, which is played by his real-life friend Anupam Tripathi. While he didn't land the part, the production still called him up and told him that he'll be playing a "special role."

According to reports, he currently works as a marketing consultant. In 2017, he started getting booked for acting gigs. And if you were wondering where you've seen him recently, he played the Pinoy waiter in Space Sweepers (2021) who tells Song Joong Ki's team to order from the resto or leave.

"I was scouted by a Korean manager and out of nowhere, she asked me, 'can I take a photo of you, can I have your details?' And from then, she just started sending my portfolio to different productions," he narrated.

Lagahit also said that he is "proud that [he] represents the minorities [in South Korea], especially the Filipino community."

Squid Game Adventurer Savvy Seasoned Staying In Netflix
Your Guide to Thriving in This Strange New World
Staying
In? What to watch, what to eat, and where to shop from home
OR
Heading
Out? What you need to know to stay safe when heading out