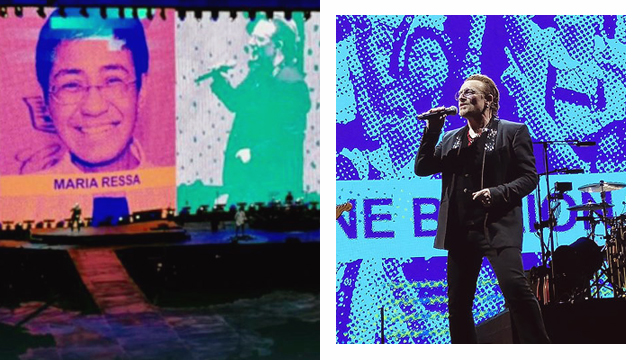 Remember when massive concerts in the PH were a thing?

(SPOT.ph) The date is December 11, 2019. You are part of the few lucky ones who managed to snag a ticket to one of the biggest concerts ever in 21st century Philippines: U2. Yup, it is the night of the Joshua Tree Tour and thoughts of a pandemic are the farthest thing from your mind. Heck, you probably didn't even think the carmeggadon of folks trying to get out of the Philippine Arena post-concert was a possibility, much less the Internet-dubbed "panini" barely four months later.

Also read: Best in Show: How U2 Inspired a Night of Transcendence

U2 congratulated Maria Ressa on her Nobel Peace Prize

Well, that night must feel so very long ago by now—but U2 just brought it back. On Twitter, the Irish rock band congratulated journalist Maria Ressa on having been conferred a Nobel Peace Prize, throwing it back to the moment they honored her—alongside several more Filipinas—during their concert.

In the middle of a war on truth, thankful to see the Nobel committee lift up the truth tellers... journalists who are guarding our democracies, not with weapons, but with their witness and their words... pic.twitter.com/obTIpxqZWK

U2's Twitter account posted this snap from the Joshua Tree Concert. Ressa's was one of the faces lit up on the gigantic screen as U2 sang "Ultraviolet" to honor strong Filipinas. In their recent tweet, they thanked the Nobel committee for shining the light on "journalists who are guarding our democracies, not with weapons, but with their witness and their words."

Congratulations @mariaressa and Dmitry Muratov on winning the Nobel Peace Prize and respect to journalists everywhere who in hostile times are standing firm to, as @mariaressa said yesterday, "win the battle for truth, the battle for facts: we hold the line."

"Respect to journalists everywhere who in hostile times are standing firm," they said in another Tweet. They congratulated both Ressa and Russian journalist Dmitry Muratov, a fellow Nobel awardee.

Ressa became the first Pinoy ever to be conferred the Nobel Peace Prize on October 8. She and other journalists were chosen "for their efforts to safeguard freedom of expression, which is a precondition for democracy and lasting peace."