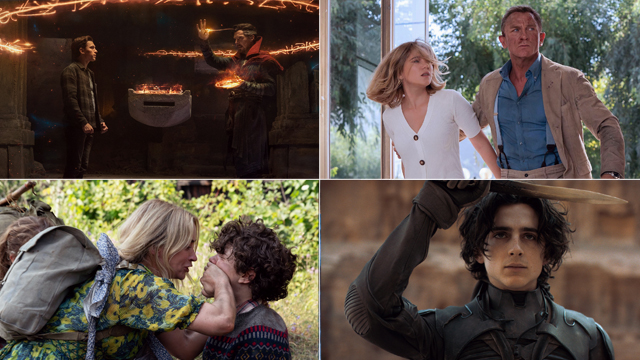 Yup, as in to a cinema near you. IRL.

(SPOT.ph) Metro Manila cinemas are making a comeback! Nearly two years after indoor movie houses closed their doors due to the quarantine, they are finally opening back up—with many slated to resume operations on November 10. In case you were wondering what movies are on the slate, we round up the titles confirmed to be screening in the Philippines so far below. Just note that the dates are still subject to change!

Check out the biggest movies coming to Metro Manila cinemas:

The Abbott family—minus one, and plus one, as those who watched the first movie will know—must now venture out into the monster-infested world. Only this time, it looks like Regan (Millicent Simmonds) has found a way to fight back.

This long overdue film pretty much exploded in the streaming world and now we'll finally get the chance to experience it on the big screen! That Scarlett Johannson and Florence Pugh tandem can't be missed.

If you're into one-location movies with extra stressful premises, then we're sure you didn't miss out on the first Don’t Breathe in 2016. Well, turns out the severely underestimated Norman Nordstrom (Stephen Lang) isn't done wreaking havoc just yet!

The Conjuring Universe's James Wan directed this horror film on a woman who has visions of murders—only for them to happen in real life.

Shang-Chi and the Legend of the Ten Rings

It'd be hard to pass up the chance to see Marvel's first Asian-led superhero film on the big screen! This movie stars Simu Liu as the titular character; he's joined by the likes of Awkwafina, Ronny Chieng, Michelle Yeoh, and Tony Leung.

The Marvel Cinematic Universe is starting off their next phase in a big way. Think a massive movie starring the likes of Salma Hayek, Angelina Jolie, Don Lee, and much more as ancient godlike heroes protecting the Earth from their equally ancient alien counterparts, the Deviants.

Venom: Let There Be Carnage

Yup, even Venom is back! Tom Hardy reprises his role for this Andy Serkis movie. Plus, Woody Harrelson takes on the role of villain Cletus Kasady, a.k.a. Carnage.

Are you going to let Daniel Craig's last Bond film just pass you by? In this one, the British MI6 agent takes on what must be his greatest challenge yet, one that takes him out of his peaceful retirement life and straight into an even greater danger than he could have imagined.

It's time for the younger generations to experience the Resident Evil universe! Stars Kaya Scodelario, Hannah John-Kamen, Robbie Amell, Tom Hopper, Avan Jogia, and more take the lead in this new addition to a classic franchise.

We still don't understand how Peter Parker (Tom Holland) got Dr. Strange (Benadryl Cucumberson) to agree with his idea of essentially messing with the multiverse. But hey, that's why we can't wait to watch the third installment! Also, we need to know if all the other Spideys are joining in on the fun.

Who you gonna call?  This latest addition from the Ghostbusters universe! Set decades after the OG timeline, a single mom and her two kids discover their connection to the first ghost-busting team. It stars Paul Rudd, Carrie Coon, Finn Wolfhard, and Mckenna Grace.

Who doesn't love a good antihero? Especially one as complicated and layered as Marvel's Morbius, played by Jared Leto in this film.

Holland continues to serve up range, this time starring in this treasure-hunting adventure film with Mark Wahlberg.

UPDATED (November 9, 2021): This article was updated after the screening date of No Time to Die was moved.