Local Music Legends are Coming Together to Form a Super Band
Loading
Already a member? Log in
No account yet? Create Account
Spot.ph is your one-stop urban lifestyle guide to the best of Manila.

Local Music Legends are Coming Together to Form a Super Band

Rico Blanco, Raymund Marasigan, Barbie Almalbis, and Buddy Zabala are all showing U2 some love. 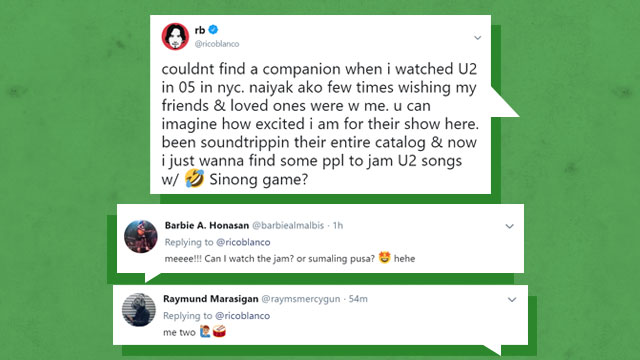 When you like an artist or genre of music, it’s not uncommon to find yourself listening to tunes that sound like the ones you’ve got on heavy rotation. The 2000s were a great time for the Philippine music scene: you got singer-songwriter Rico Blanco and bassist Japs Sergio of Rivermaya fame, the familiar voice of Barbie Almalbis against mellow guitars, you’ve also got guitarist Francis “Brew” Reyes lending a unique sound to The Dawn’s songs, and even new music from former Moonstar88 bassist Buddy Zabala and former Eraserheads drummer Raimund Marasigan.

These artists may have shaped your musical taste, but even these OPM legends look up to other music greats for inspiration. In fact, these six share such a great love for Irish rock band U2 that after a quick Twitter conversation, they took it upon themselves to form The Super Band to put their own spin on the legendary band’s unmistakable hits.

It all started when Blanco tweeted about the time he watched a U2 show alone in New York, and mentioned being excited for the Manila stop of their tour this year. He also asked if anyone was game to jam!

Minutes later, Reyes replied to the tweet and talked about U2’s 2009 Toronto show, and promptly added that he was more than game to join Blanco.

Almalbis then replied, asking if she could join.

Blanco eagerly replied that she was more than welcome to join, along with Reyes. He also tagged Sergio, suggesting that he play bass for this jam session.

Sergio cut to the chase and said yes.

Thus, the idea was born: Why not make it an official thing?

Reyes coming in with a pun! (Admit it, you laughed!)

And just when you thought there were plenty enough big names were in on this, it only gets better with Marasigan joining in on the fun and volunteering to play drums for this superpowered band.

And who better to play keys for this than Zabala himself?

At this point, it was all fun and games imagining this collab, but this might actually happen!

Turns out some things aren’t too good to be true.

It’s been a ride narrating this from start to finish, but it’s not every day that this happens. Whether you’re a huge U2 fan or a casual listener who hums along to their songs, there’s no denying how exciting it is to know that big names in the local music scene are coming together to form a Pinoy band supergroup to cover U2’s greatest hits.