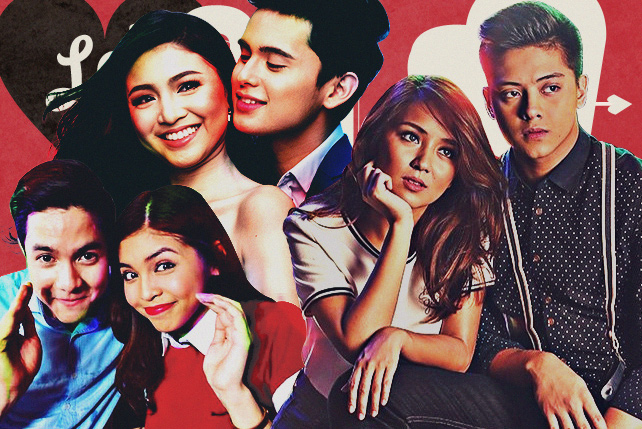 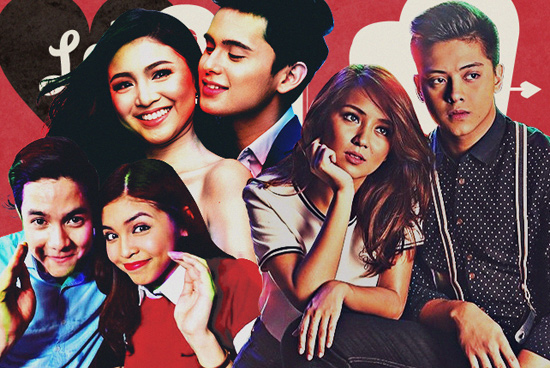 (SPOT.ph) It is almost impossible to picture local showbiz without love teams. From the early days of Guy and Pip to the DongYan we know today, we eagerly watch as a new crop of stars emerge and pair off for a multitude of films, telenovelas, and endorsements. Here are 10 present-day love teams that captured the hearts of viewers since they appeared on the big and small screens.

First appeared together in: The 2011 teen show, Growing Up

Memorable work: Princess and I; Got to Believe; She's Dating the Gangster (2014); Crazy, Beautiful You (2015); and the currently airing remake of Pangako Sa 'Yo

Love team appeal: Teen love might not always last, but these two make it seem like it does.

Why we like them: Just ask their legions of really, really passionate fans. These two have been working together for four years, and their love team sees no signs of slowing down any time soon. Plus, they were both recently nominated for She's Dating the Gangster at the 63rd FAMAS Awards.

First appeared together in: A 2014 episode of Maalaala Mo Kaya

Love team appeal: They both hail from showbiz royalty: Iñigo is the only son of Piolo Pascual, while Julia is one of the youngest members of the Barretto clan.

Why we like them: They're relatively new compared to the other love teams on this list, but their superstar genes definitely bolster their appeal. They're set to star in their own telenovela, And I Love You So.

First appeared together in: The 2014 telenovela, Two Wives

Memorable work: Uh, do their respective Instagram accounts count? They have an upcoming TV show called Be My Lady, which will tell the love story of a foreigner and a Filipina. Sounds familiar?

Love team appeal: Unlike other love teams that were paired off for the cameras, this one took place behind the scenes. Their friendship started on Kris TV and blossomed while working together on Two Wives. Back then, Erich was still in a long-term relationship with her non-showbiz boyfriend. In April, Erich confirmed the split, conveniently at a time when people were speculating that she and Daniel were an item. Their subsequent super-sweet posts on social media only fueled the rumors, but Daniel didn't officially admit to the relationship until May. Reports also said Daniel was the reason for the breakup, which he denied.

Why we like them: Erich's girl-next-door vibe is perfect for Daniel's sexy, swoon-worthy looks. And yes, the offscreen romance helps.

First appeared together in: The ensemble comedy Status: It's Complicated (2013)

Love team appeal: People quickly latched onto their chemistry, despite the fact that Paulo's character was initially the "villain" in the show's love triangle. They played up their love team with sweet interviews and even sweeter duets on ASAP. After Maja and Gerald Anderson went their separate ways in May, rumors circulated that she and Paulo were an item. (They both denied the reports.) Although Maja has moved on to her next love team with Coco Martin in Ang Probinsyano, fans still clamor for her to work with Paulo again.

Why we like them: They're two gorgeous celebrities who look really, really good together. So good, in fact, that we almost forgot Jericho Rosales was even on the show.

First appeared together in: Rosario (2010)

Love team appeal: Their on-and-off relationship in real life keeps fans on their toes. Their relationship in 2010 was admittedly turbulent, with reports of physical abuse on the night of their breakup. They eventually went on to see other people, but rumors of their reunion began circulating around late 2014. These days, they have yet to officially admit they're dating, despite being seen out and about together.

Why we like them: While we cringe at their history, we like what we see when two very talented actors work together.

First appeared together in: The critically acclaimed 2012 series, Walang Hanggan

Love team appeal: Coco's boyish charm and Julia's down-to-earth personality is a winning combination of wholesome likeability. They're both incredibly talented individuals, but when put together, their compatibility is off the charts. No matter what project they did, something just made you want to root for them.

Why we like them: Their offscreen closeness over the years drives the kilig factor. Despite being paired with a string of leading ladies, Coco himself said that he would always want to work with Julia. He also admitted that Julia is "girlfriend material" and that she's "very special" to him. Julia, on the other hand, reportedly even bought a house in the same village as Coco's.

First appeared together in: My Binondo Girl but they both had small roles in 2011's Minsan Lang Kita Iibigin

Love team appeal: It's easy to see why this pairing works, with Kim's bubbly and adorable persona and Xian's polished good looks. Since their first team-up in 2011, they're still going strong both off and onscreen. They're even reuniting for a new teleserye!

Why we like them: Their chemistry was so palpable that Kim's fans didn't even have enough time to mourn the end of Kimerald in 2010. A year later, the rumor mill was quickly churning out reports that they were dating, but to this day, they've simply labeled what they have as "special."

First appeared together in: Supporting roles in She's the One (2013)

Memorable work: Forevermore; Just the Way You Are (2015)

Love team appeal: These two are the definition of cute and wholesome. Liza's stunning features and youthful "good girl" image? Enrique's "cocky but secretly sweet" persona? It's a winning formula that has won over audiences since the dawn of time.

Why we like them: Besides being really easy on the eyes, LizQuen's chemistry is undeniable—whether they're in front or behind the cameras. Plus, fans don't have to speculate about the possibility of a real romance; Enrique has been pretty open about courting Liza.

First appeared together in: Diary ng Panget (2014), but they also did an episode of Wansapanataym in the same year

Memorable work: Talk Back and You're Dead (2014); Para sa Hopeless Romantic (2014); and the currently airing On the Wings of Love

Love team appeal: Nadine's relatable, down-to-earth charisma perfectly complements James' medyo bad boy swagger. You can see how effective their love team is when fans clamor for a real relationship, despite both parties insisting they are just friends. Plus, they both sing so here's to them making beautiful music together.

Why we like them: It admittedly took us awhile to warm up to these two, but On the Wings of Love sealed the deal. This pairing proved they can do a fun rom-com just as well as any of their successful predecessors. Sometimes, you don't need copious amounts of melodrama to make something work. You just need an easy rapport, the occasional bickering, and plenty of swoon-worthy kissing scenes.

First appeared together in: A July episode of Eat Bulaga

Memorable work: The KalyeSerye is massive enough to be memorable for the rest of their careers, but they do have a handful of endorsements and an upcoming appearance in an MMFF movie.

Love team appeal: Ask any of their ardent fans, celebrity or otherwise. Or maybe check their skyrocketing ratings. AlDub is a visual representation of wholesome Filipino values, such as formal courtship, getting to know a girl's family, and waiting for the right time. Their chemistry is undeniable, even with a split-screen between them and when they finally met face-to-face, it was enough to shatter records...repeatedly. We can't imagine how the Internet would react when they actually kiss.

Why we like them: Alden is the picture of a perfect gentleman, and the kind of boy we wouldn't mind introducing to the folks. Meanwhile Maine's fun personality is endearing, and her comedic timing is impeccable. Throw in some Dubsmash, impromptu gags, and one-liners from Eat Bulaga, and you've got yourself a winner (though perhaps, an unexpected one).

Remember, this is just for fun! This poll expires on October 12.

Aldub Danrich Denjen Eternal Pinoy Love Team Jadine Julco Julnigo Kathniel Kimxi Lizquen Love Teams Pinoy Love Team
Your Guide to Thriving in This Strange New World
Staying
In? What to watch, what to eat, and where to shop from home
OR
Heading
Out? What you need to know to stay safe when heading out